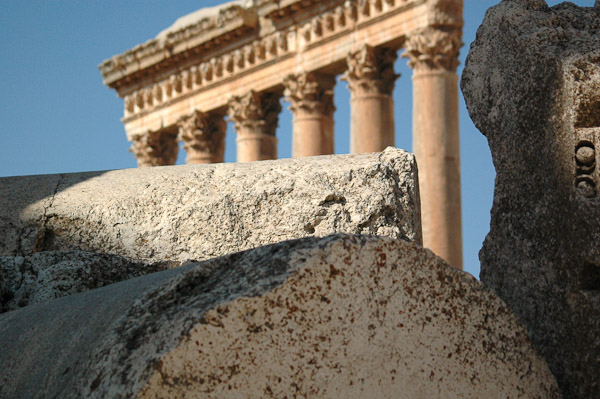 A five hour flight to Lebanon coupled with a lengthy, fog-bound delay at Heathrow is a good time to do some reading about this most complex of Middle Eastern countries. Your mind spins trying to remember the names of the nineteen officially recognised sects, not to mention the shifting patterns of alliances, enmities and regional tensions. “Don’t worry,” one of the air hostesses on Middle East Airlines told me, “we don’t understand them either.”

If Lebanese politics is hard to unscramble, its wine industry is considerably simpler, partly because it is so small. But even here you are left scratching your head. No one really knows how many hectares of vineyards there are in Lebanon — the lack of official statistics isn’t surprising in a country that hasn’t had a census since 1932 — but Serge Hochar of Château Musar reckons it’s between 2000ha and 3000ha. “In Lebanon,” he says, “nothing is official. It’s like China, but on a smaller scale.”

The number of wineries is easier to work out. There are currently 31 of them according to Michael Karam’s indispensable 2011 Lebanese Wines guide, which represents considerable growth. When the 15-year Lebanese civil war came to an end in 1990, there were only five (Château Musar, Château Kefraya, Château Ksara, Domaine des Tourelles and Nakad Winery).

The Lebanese wine industry is becoming increasingly diverse, with 20 of those 31 wineries created in the last decade. Not all of them are as well funded as Ixsir, a new, $10m project in which the motor industry magnate, Carlos Ghosn, has a stake, but they are bringing critical mass to the wine sector. It takes guts to plan for the future in a country where invasion, bombing and a possible, Hezbollah-backed coup d’état are almost daily fears, but Lebanon’s winemakers are doing just that.

Who drinks the 7m bottles  the industry produces? The answer is mostly the Lebanese themselves, both at home and overseas. Something like 14 million Lebanese live outside the country, compared with 4m in Lebanon itself. Even though the population is predominantly Muslim (Sunni, Shia and Druze), this is a comparatively liberal Arab country. During Ramadan, wine consumption halves in Lebanon — evidence that some (Lebanese) Muslims enjoy wine.

This wasn’t always the case.  ‘Lebanese’ wines were famous in antiquity — the Phoenicians traded something called Bybline all over the Mediterranean and there is a very striking Temple of Bacchus, built by the Romans in Baalbek in the eastern Bekaa Valley — but died out under the Ottomans. Between 1517 and 1857, there was very little wine made in Lebanon.

It was the French who changed all that. First, the Jesuit mission at Château Ksara imported French varieties from Algeria in the mid-19th century, rekindling the country’s viticultural flame by making wine for public consumption, rather than religious use. Then the Gallic influence became stronger still in the 20th century, as Lebanon was governed by the French between 1920 and 1943.  The administrators of the French Mandate drank wine, but so in increasing numbers did the Lebanese.

To this day, French grape varieties still dominate the Lebanese wine scene, although there has been a shift in the varietal mix in the last decade, away from Mediterranean grapes. The pioneers imported Cinsault, Carignan and (to a lesser extent) Grenache, but today the focus is increasingly on cooler climate grapes such as Cabernet Sauvignon, Merlot and Syrah.

This being Lebanon, nobody can provide any meaningful statistics, but Cinsault remains the most planted grape in the country. Some winemakers dismiss it as an old-fashioned grape, but it makes some very exciting wines here, provided yields are kept low and it’s blended with other varieties.  Michael Karam says it’s “the red grape that best expresses the Lebanese terroir” and I agree.

More than two thirds of Lebanese wine is vinified by three large companies (Châteaux Kefraya, Ksara and Musar). The other 30% is made up of medium sized and boutique producers. Some of these, such as Heritage, Clos St Thomas, Château Ka and Domaine Wardy, were arak or fruit juice producers who branched out into wine after the civil war, while others, such as Massaya, Château Marsyas, Domaine de Baal, Château Khoury, Château Belle-Vue, Château Fakra, Ixsir, Coteaux du Liban and Karam, were created specifically to produce wine.

Is there a niche for Lebanese wines in the UK? I believe there is. The quality is good to very good, the mix of red varieties is unusual (the best Cabernet/Merlot/Syrah blends are excellent, but so are the Mediterranean blends), the rosés are delicious and prices are reasonable. Politics may intervene in the future, as it always seems to in Lebanon, but for now the wine industry is on a roll.