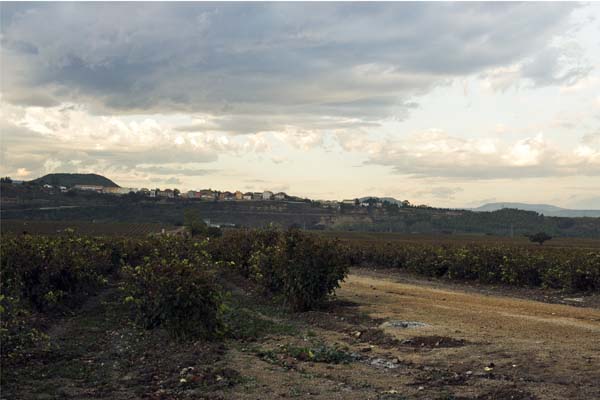 It’s probably scant consolation to château owners struggling to sell their wines en primeur right now, but Bordeaux wasn’t the only European region that had a difficult vintage in 2013. I was in Rioja last October and the harvest was wet and nail-bitingly late. The skies were some of the darkest I’ve ever seen in the region.

At Allende, Miguel Angel de Gregorio joked that the growing season had been so rainy that he’d considered a new sideline selling umbrellas. Over at Contino, where 90% of the crop was wiped out by hail in early September, Jesús Madrazo described it as “a very late harvest, which means it’s not ripe, while the combination of sunshine and rain are perfect for botrytis”.

I wasn’t around to see most of the grapes picked – some were three weeks away from maturity when I left – but most of the bodegas I visited were pessimistic about their eventual quality, despite a few comments about a return to traditional vintages. In short, it was a really poor vintage.

So imagine my surprise when Rioja’s DOCa Council released its official rating of 2013 last week. To describe it as “good” takes the use of euphemism to new lows. If that vintage was good, what does a bad one look like? If it was “a difficult year for grape growers”, why not reflect that in the rating?

Even more bizarrely, it turns out that good doesn’t really mean good after all. The Council only has five words to describe vintages in Rioja. In descending order of quality, these are “excellent”, “very good”, “good”, “satisfactory” and “average”. It’s an example of doublespeak that would have made George Orwell smile.

Is a terrible vintage like 1984 really only “average”? Appalling would be closer to the truth. You can imagine the four horsemen of the apocalypse rampaging through Rioja, trailing fire, hail, pestilence and botrytis in their wake only for their handwork to be lauded with a satisfactory rating.

Economy with the actualité, to use the term coined by the MP Alan Clark, isn’t restricted to Rioja. Just as Spain’s leading wine region hasn’t had a dire vintage (sorry, “average”) vintage since 1972, so Montalcino hasn’t had what it calls an “insufficient”, or one star harvest since 1984. In Rioja, the last ten vintages have been either “very good” or “excellent”. In Montalcino, the last eleven have been awarded four or five stars.

Anyone who understands either region will know that the official ratings are often farcical, but I’m sure there are consumers (and even members of the trade) who take them at face value. It’s slightly silly to sum up a whole area in one vintage classification – the Rioja Baja and the Rioja Alavesa are very different sub-regions, as are the northeast and southwest of Montalcino – but this is worse than that. Political considerations and a reluctance to offend producers whose levies help to keep the respective regulatory bodies in business are deemed to be more important than an accurate description of the vintage.

The Rioja Council takes a different point of view, of course. It claims that it arrived at its classification after “exhaustive” tests on tanks of wine maturing in the region’s bodegas. I haven’t tasted the wines, but you wonder how stringent the criteria are when you learn that only 103 of 3,973 samples were rejected.

This raises a broader point about appellations. It is often assumed that they guarantee a certain level of quality, when they are mostly focused on protecting origin, tradition and the interests of producers. If local regulatory bodies were serious about promoting the integrity and nobility of appellations, they would take a much tougher line on faulty wines.

Did anyone in a position of authority in parts of the Loire or Chablis notice that a huge percentage of the wines presented for authentication from the 2011 vintage were afflicted by an earthy, beetroot-like character caused by the organic compound geosmin? If only someone had and acted on it and declassified the most egregiously tainted examples.

A few years ago, the head of what was then called the Institut National des Appellations d’Origine and, since 2007, has been renamed the Institut National de l’origine et de la qualité (my italics) proposed a rugby union-style system of yellow and red cards. Make one really bad wine and you’d be given the former (and the help of a professional oenologist for your next vintage). Make two in a row and you’d be suspended from the appellation until you mended your ways.

Needless to say, it never happened. The agrément tasting system (and its equivalent in other appellations around the world) is supposed to guarantee a certain level of quality, but it’s a very rough cull indeed, partly because wines are judged by local tasters who don’t want to upset their colleagues. Faulty wines continue to slip through the net and onto the shelves. Like exaggerated official ratings of poor vintages, they undermine the confidence of the people who really matter to wine regions: consumers.

This article was originally published in Harpers