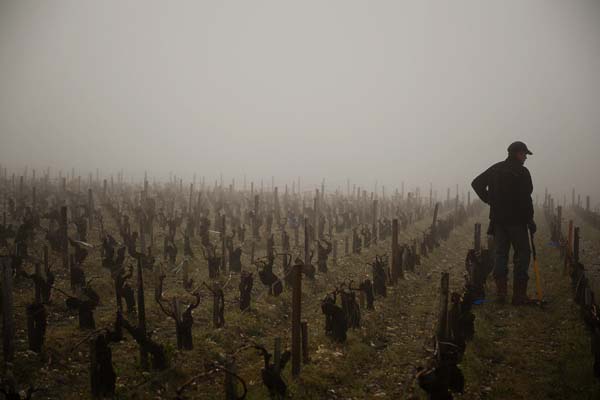 Here in Bordeaux, we’re Singin’ in the Rain over the wonderful 2013 Harvest. Many might compare 2013 to the magical vintage of 1984, a vintage memorialized by the great George Orwell, who borrowed doublethink from our legendary Bordeaux promotional materials. It may be too early to declare 2013 the Vintage of the Century, but Robert Parker, the influential American wine critic and recipient of France’s highest honor, the Jacques Pépin Medallions of Beef, has already said of the wines, “When it comes to mold, they broke it.”

We have Mother Nature to thank for the wonderful vintage. So often, as in the landmark vintages of 2009 and 2010, Mother Nature has been stingy with rainfall, refused to release even the tiniest amount of hail. It is only through the heroic work of winemakers and vineyard managers that a vintage without rain in the Spring or Fall can be turned into a great year in the winery. That wasn’t a problem in 2013. It’s simple botany to understand that vines require sunlight and water to ripen their grapes, and a vintage with only sunlight is, to phrase it simply, like sex without a partner. You do what you have to do, but it’s just not as good without a little wet. In that same vein, it is good to remember that a great harvest is also like sex without a partner — better done by hand than machine.

Mother Nature smiled on us with generous rain in May and June, as well as a final, post-coital, shower in October. The rain, and the cold that accompanied it, guaranteed a vintage of pure, sophisticated, light-bodied reds–a highly sought-after style that is difficult to achieve without luck, the blessing of perfect location, and cold fronts that rival Nancy Grace and Ann Coulter.

Wine collectors who have a cellar full of Bordeaux from 2009 and 2010 will want to make room for the 2013s. It is a measure of the success of the vintage that you won’t need to move those ‘09s and ‘10s. The wines from 2013 can be stored in the very front of your wine cellar, in easy reach, ready when you are. A truly great vintage doesn’t require you to have to consult a pesky vintage chart to know when it’s mature enough to drink. Genuine greatness is most often achieved in youth — think Mozart or Michael Jackson. Or Roman Polanski. The 2013 Bordeaux vintage is much like vintage Michael Jackson — not only great, but pleasingly less dark than the original.

In lesser vintages, prices for the wines of Bordeaux should be significantly less. That is, if there were any lesser vintages. We haven’t had a lesser vintage in more than fifty years. You can refer to the press releases and see that this is true. We have only greater vintages. 2013, for example, is even greater than 1984, which was greater than 1977, which was, remarkably, greater than 1942 — a vintage notable in its youth. Hitler Youth. One doesn’t purchase greatness cheaply. For example, have you seen how much it costs for an MW? Imagine, then, having to buy one. Well, in Bordeaux, we own several. And, candidly, we need to pass those costs onto the consumer.

We do promise, however, that, in the near future, we will have a lesser vintage in Bordeaux. It will just take us ten years to admit it.

The Bordeaux Growers Association would like to extend its sympathies to the unfortunate winegrowers in Burgundy and the Loire Valley. Where our rainfall was nourishing and revitalizing, theirs was catastrophic. While we were basking in the beauty of rainbow after rainbow, they sat and watched as their precious crop turned to one big moldy mess. Our hearts go out to them. But the cold reality is, lesser vintages belong to lesser varieties. That’s just a fact, don’t blame us. We didn’t create reality here in Bordeaux. We’re just the experts at distorting it.

We don’t expect you to take our word for 2013 being a great vintage. Though, seriously, why would we lie? Many knowledgeable wine critics have already weighed in on the 2013 vintage in Bordeaux. Here are some of their thoughts on this truly remarkable vintage:

“As in every previous legendary vintage of Bordeaux, I expect the wines will be put into barrels.” — Tim Atkin MW

“The grapes that I saw from the balcony of my suite at Château Margaux looked tiny and near-perfect, though I may have been looking through the wrong end of the binoculars.” — David Peppercorn MW

“The 2013s are wines that will be talked about in hushed tones–or you won’t be allowed to visit again.” — Michael Bettane

“2013 is the best vintage in my living memory. Now where the fuck are my car keys, and when is Winston Churchill coming to visit me?” — Michael Broadbent

Honestly, we wouldn’t feel the need to remark on the wondrous 2013 vintage if it weren’t for so much misinformation circulating around the harvest. No matter what you might read from sketchy “authorities,” the vintage was near perfect. If in only two months out of your life a little metaphorical rain fell, you’d call that near perfect, wouldn’t you? Of course. And, on top of that, modern winemaking has all kinds of tools at its disposal to fine tune even this near-perfect vintage. Many wineries utilize high-tech optical scanners to ensure that only clean, perfect grapes go into the fermentation tanks. This is the same technology that keeps our airplanes safe, and provides the Internet with endless upskirt photos. We have access to spinning cones that can magically lower the alcohol in our wines, but 2013 is such a fantastic vintage, we won’t even need them! Bordeaux didn’t have the ripeness that plagued other winegrowing regions. We’ll have made wine from grapes in 2013 the way God intended it—just as soon as they turned color!

Yes, 2013 was just another great vintage in a region overflowing with great vintages. The 21st Century has seen one fantastic, collectible vintage after another. Bordeaux is the envy of every appellation in the world, and we work hard at reminding everyone of it. You’ll want to stock up on the 2013s, and stock up quickly. But, be forewarned, leave room in your cellar.

2014 is a guaranteed Vintage of the Century!