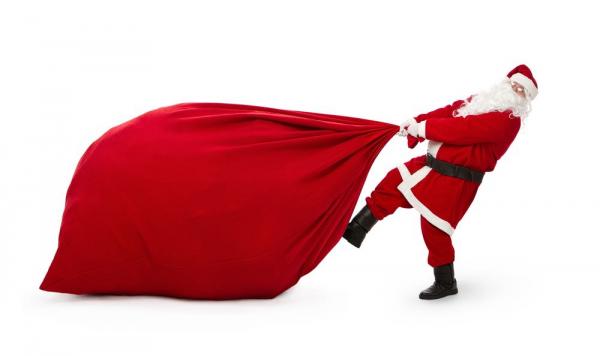 This Christmas, I don’t want anything for myself. I have everything I need, Santa. A cellar filled with the great wines of the world, and Oregon wines, too. A Roederer International Wine Writers Award that I bought online from an “A. Jefford.” I’ve even grown and implanted my own replacement Biodynamic liver using the latest stem cell technology, mixed with the manure of a lactating cow. I feel born again, and, as a bonus, my new set of horns is great for opening beer bottles! I’m very content. Soon I’ll have my own cheese! I really enjoy the milking. No, not like Harvey Weinstein.

No, Santa, I’m not writing for myself, I’m writing on behalf of the business I love — the wine business. Oh, Santa, it’s in a terrible state. So much bickering, so much fake news, so much jealousy and hate. Won’t you please help? If you don’t help, I don’t know who will. The whole wine world has gone to Hell, Santa, and you just sit there in your big red suit like some kind of low-rent Jean-Charles Boisset, exploiting those poor little elves like they’re Guest Workers from Mexico and you have fifty acres of Riesling to harvest before you call the immigration authorities. You’re using the Riesling to make the new California version of ICE-wine. Come on, Santa, we need your help.

If all the wines in the world were natural wines, Santa, there wouldn’t be any need for scores either. Scores are for fake wines. Like the “Wine Spectator” #1 Wine for 2017, the Duckhorn 2014 Three Palms Merlot. How can Duckhorn be the #1 wine of 2017? First of all, it’s Merlot. There is no second of all.

If all the wines in the world were natural wines, there wouldn’t have to be any more Top 100 lists! People who drink natural wines don’t care about scores. I think it’s obvious people who make natural wines don’t care about scores. That would be like suicide bombers caring about their wardrobe. I’d be so happy if next December there aren’t any Top 100 wines lists. I think everyone in the wine business agrees — except for the advertising departments of major wine publications. What would they do without scores, sell integrity? Yeah, right.

Santa, would it be possible for you to eliminate restaurant wine list awards, too? They’re just so stupid. And more and more of them are given away each year. It’s getting ridiculous. Owning a restaurant and getting an award for your wine list is like owning a funeral home and getting an award for your makeup. Though that is what sommeliers try to do — make the stiffs look better. Restaurant wine list awards are for the magazines that award them, not the restaurants. You have to pay money to be considered for a restaurant wine list award? What other awards do that? I don’t think the Nobel committee has a nominating fee, though you do have to be among the living, which leaves out most of the “Wine Spectator” critics. I’m pretty sure Michelin doesn’t expect you to buy a set of tires to be considered for a couple of stars. But if you own a restaurant, you send a copy of your wine list to “Wine Spectator” along with a check for $400 (yes, four hundred fucking dollars), and they grace you with a two dollar certificate validating your wine list’s quality. Remember, it’s not how much wine you sell that measures the success of your wine list, it’s that you have a Best of Award of Excellence, whatever that means. Isn’t that like a Best of Bronze in Synchronized Swimming?

We don’t need these scams in the wine business, Santa. We’ll never get rid of the suckers that think a great wine list is a huge wine list. Why, that’s like thinking the one who gets the most votes wins. It might seem logical, but it’s sadly untrue. So can we at least do away with the awards themselves? Thank you.

Santa, this is a touchy subject, but wouldn’t it make for a perfect Christmas if you ended sexual harassment in the wine business once and for all? It’s always been prevalent, but it’s time for it to stop. In fact, when I heard about Louis CK, I thought maybe “CK” was some sort of wine credential, like MS or CSW. But then I heard about how much he liked to stroke Mr. Microphone for young women, and I was sure of it. Using your sex for dominance is ancient primate behavior, but now that we have an orange-crested mandrill in the White House, isn’t it time we put an end to it? Misogyny has no place in the wine business. Misanthropy is far more efficient.

Maybe 2018 can be the year of reckoning for those old white males in charge of the wine business. You know the ones, Santa, we all do. Illustrious winemakers who think a good yield is the cute blonde in the tasting room. Old white men with initials after their name who “mentor” young women through the process, and think they’re owed something in return. They are the kind of stalking stuffers the world doesn’t need any more, Santa. And don’t we all know who they are? Why do we still respect them? Why do we protect them? Because they know about wine? That’s like protecting a man because he can read the news in a deep voice. And what about the way a sommelière’s life on the restaurant floor is so much tougher than a sommelier’s? How if a sommelier gets drunk he’s just a character, if a sommelière gets drunk she’s a target. So many idiots in the wine business, Santa, can’t we at least get rid of the predatory males? Imagine the thousands of jobs that would open up! It just might end the three-tier system in the United States because there’d be nobody left to run it…

I have a lot of other requests, Santa. Like why don’t we have two kinds of auctions for wines? One for the fake wines, and one for the real ones? Only don’t tell anyone which auction they’re attending. Oh, I guess we already have that. Never mind. And what about renaming the large format bottles? No one can remember the names of all those ancient Biblical kings like Rehoboam, Nebuchadnezzar, and Methuselah. Why don’t we name the large format bottles for famous singers instead? “Hey, do you make that in a Double Beyoncé?” “We bought that Rihanna of Cabernet at the Napa Valley Auction.” “You know, they age better in an Adele.” Way more fun! But I think I’ve asked for quite enough this Christmas, Santa. Thank you for making my wine dreams come true.