As you’d expect of a former actress, 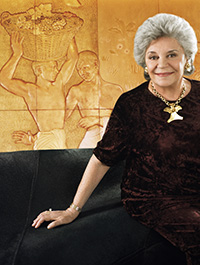 liked an audience. When Château Mouton-Rothschild hosted the Fête de la Fleur celebration at Vinexpo in June 2003, after guests had enjoyed liberal quantities of the legendary 1982 she took to the stage to thank the room. She had, she announced, invited a good friend along to sing to us. To the sound of the opening bars of the drinking song from Verdi’s La Traviata, a black curtain opened behind her to reveal none other than Placido Domingo. Most people would be upstaged by a world famous opera singer, but Philippine had star quality of her own.

It was a very different Baroness who welcomed the international press to Mouton in June last year for the opening of the château’s new cellars. The deep, thespian voice was still there, but she seemed distracted and fragile, stumbling over her lines and lost at the lectern. The speech contained flashes of her characteristic humour, but it was tinged with sadness. The event itself was every bit as stylish as that dinner in 2003, although there were no opera stars this time, but our host was far from her usual, attention-commanding self. 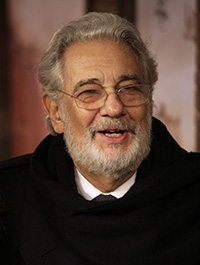 That was the last time I saw Philippine. She wasn’t at the château when I went to taste the 2013 vintage en primeur – a year that showed Mouton at its best in a tricky year – and she passed away aged 80 at the end of last month after complications following major surgery. Like most people who entered her orbit from time to time, I was charmed. Philippine was witty, intelligent, stylish, indiscreet, dynamic and ever so slightly flirtatious. Of all the first growth château owners, she was the one you would welcome sitting next to the most.

She was proud of her family business, and the role she had played in its development, but wine was far from her only subject of conversation. Literature, music and the theatre were all great passions, too. “I will get on much better with a journalist or a writer than I will with a man who deals with numbers and wears flashy clothes,” she once admitted. “I have discovered that you can do business without living with business people.”

On one occasion, I talked to her about what it was like being in Paris during the Occupation at a time of great danger. Despite the fact that she was a Catholic aristocrat, and not a Jew, the Baroness’ mother, Elisabeth Pelletier de Chambure, was arrested in 1944 and sent to Ravensbrück concentration camp where she died. Philippine herself was lucky to escape deportation.

Philippine Pascal, as she was known on stage and screen, was a successful actress. She graduated from the Conservatoire National Supérieur d’Art Dramatique and appeared at the Comédie Française, as well as in films such as Heartbeat, Harold et Maud and Swann in Love. But it was as a grande dame of wine rather than the arts that she truly found her métier.

Philippine joined Baron Philippe de Rothschild in the 1970s, shortly after Château Mouton-Rothschild had been elevated to a first growth. She was involved in the first ever exhibition of the property’s famous “artist labels” (a tradition that Baron Philippe started in 1945), but did not truly make her mark until after her father’s death in 1988. She was very much her own person, despite being the child of such a flamboyant parent.

If anything, Philippine was a better businessperson than Baron Philippe. The company she inherited sold 15.6 million bottles of wine; the one that she bequeaths to the next generation sells 22 million and is in robust health. She also oversaw an upturn in the reputation of the company’s three Bordeaux châteaux (Mouton-Rothschild, d’Armailhac and Clerc Milon).

Philippine introduced a second wine, Le Petit Mouton, at the first of this trio, but was not exclusively focused on the top end by any means. The production of Mouton Cadet, the Gironde’s most successful brand, also increased substantially under her leadership, contributing handsomely to the bottom line. Its less than sparkling image never seemed to tarnish the rest of the portfolio.

Outside Bordeaux, Philippine continued the pioneering work of her father. She, launched Almaviva, a joint venture with Concha y Toro in Chile in 1998, the same year that she and her two sons, Philippe and Julien, bought Domaine de Baron’arques in the Languedoc. In 2005, she negotiated the tricky transition in ownership from the Mondavis to Constellation at Opus One in California, a business that her father and Robert Mondavi had created in 1979.

I’m writing this on the day of her memorial service in Pauillac. I won’t be there, but I hope a big crowd turns up to pay tribute to one of the wine world’s great figures. Who knows, maybe Placido Domingo will be among them.