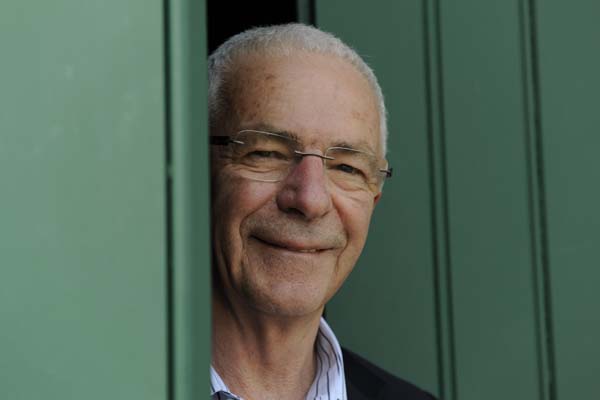 Is there such a thing as the New Zealand dream, a Kiwi equivalent of America’s fabled journey from poverty to prosperity? If so, Sir George Fistonich is surely its personification. Born the second son of Croatian immigrants, whose father came to the North Island to dig kauri gum in the 1920s, Fistonich left school at 15 without much in the way of qualifications or prospects. Today, he is the highly successful CEO of Villa Maria, New Zealand’s largest family-owned winery, and one of the most respected figures in the world of wine.

The transformation from apprentice carpenter to Knight of the Realm is a remarkable story, told in a new biography, The Winemaker, published to coincide with Villa Maria’s 50th vintage earlier this year. No silver spoons, just hard work, determination and a little luck. And yet everyone who meets Fistonich comments on his humility, his diffidence, his lack of braggadocio. In person, he’s remarkably shy, a mumbler who talks out of the side of his mouth and seems slightly uncomfortable discussing his achievements.

The beginnings of Villa Maria Wines, as it was known then, were so naïve as to be almost comical. Fistonich chose the name because “Villa made it sound European and Maria is the most international name on the planet”. The 21-year-old leased a one acre vineyard from his father in Mangere, borrowed a home-made grape crusher made out of an old mangle, and started making vino. Home winemaking was a family tradition and his uncle imported the stuff from South Africa, but otherwise, Fistonich was blissfully unprepared for his new career.

What he had, and retains, in abundance were diligence and a determination to succeed. “He started the business on the smell of an oily rag,” says the viticulturalist Steve Smith MW of Craggy Range, who worked for Fistonich for ten years. “He never had any money, so he had to think creatively.” With no transport of his own, he once borrowed a friend’s truck for the evening and, without telling him, drove the 75 miles to Te Kauwhata and back to pick up some grapes he’d bought. “He’s tenacious,” adds Smith. “When he believes in something, he will go to the nth degree to make it happen.”

The 1962 vintage at Villa Maria yielded 100 cases of “Port”, sweet “Sherry”, “Burgundy”, “claret” and “Hock”. The grapes that went into them were typical of New Zealand at the time: Seyval Blanc, Baco 22A and Albany Surprise. The dry wines were a hard sell in the 1960s, but Fistonich made customers buy one bottle for every flagon of Sherry or Port. That cussed streak again, combined with a vision of the future perhaps.

Another element of Fistonich’s success – his company’s ability to win unprecedented quantities of wine show medals – was established from the start. Fistonich entered some bottles into the 1962 Royal Easter Show and came second and third. Typically, he can’t remember who won. Even then, Fistonich cared about the grapes he was growing, and more often buying. “I had a natural instinct for choosing good raw material. I was quite fussy about when the grapes were picked and always used to leave them on the vine to get very ripe.”

The attachment to the land was inherited from his parents. “My family had five acres, two cows and a market garden. I used to milk the cows before I went to school. As a Croatian household, you worked bloody hard.” But Fistonich differs from his strict father in one very important respect. “My father was risk-averse,” he says. “That’s why he saw no future in winemaking.” His son, on the other hand, has a gambler’s love of risk, combined with steely business acumen.

Like a good Croatian immigrant, Fistonich began to acquire land and other wineries once his own operation started to succeed. The Villa group, as it’s loosely known, now includes Vidal (1976), Esk Valley (1987) and Te Awa (2012), as well as more than 900 acres of vineyards from Auckland to Marlborough. These include a series of single vineyard sites, bottled as such by Villa Maria: Waldron, Rutherford, Taylors Pass, Seddon and Maxwell (Marlborough), Ihumatao (Auckland) and Twyford Gravels, Keltern, Omahu Gravels and Waikahu (Hawkes Bay).

Fistonich didn’t take on his first full-time employee until 1968 – he and his wife, Gail, worked alone until then – but it was a shrewd appointment. Ross Spence worked for Villa Maria as its first salaried winemaker until 1973, before leaving to plant the first Sauvignon Blanc vines in Marlborough and found his own equally pioneering winery, Matua Valley.

Fistonich seems to inspire tremendous loyalty in his staff. “George is a very unusual person,” Ross Spence told Joelle Thomson in her recently published book on New Zealand wine, The Wild Bunch. “He has an uncanny way of getting the best out of people without them even knowing it.” Asked how he does it, Fistonich is characteristically modest: “I’ve got an easy-going, open style of communication, I listen to people and I let them be themselves.” The thing that he prizes above all, he says, is “passion” rather than university diplomas. “I don’t like what I call academic winemakers.”

Fistonich was actively involved in blending Villa’s wines until 2002, but has switched his focus since then. “I look at the finished styles, but I don’t get involved unless there is a change of winemaker. It’s very important that we keep consumers in mind, rather than catering to 0.05% of the population by making bone dry wines. We’ve always made wine to suit the consumer.” The fact that they win so many gongs implies that professionals like them too.

People who have worked for Fistonich say that he is fair as well as honourable, although he can be a little curt with employees who choose to leave the Villa fold. His sense of decency was evident in 1985, when the company went into voluntary receivership following a discounting war initiated by the big producers. He got the business out of trouble, drawing on the support of his staff and even calling the chairman of Villa’s lending bank at home on a Sunday night. By April 1986, he had paid back all his growers and creditors.

How did Villa survive? “It’s surprising what you will do when you’re under pressure. Everyone is surrounded by a little bit of luck, but you can create your own luck, too. If you’re really passionate about something, you’ll get there. By nature I’m an optimist. I believe things will turn out right.”

That doesn’t stop him speaking out when they don’t, mind you. Fistonich says he believes in “the law of common sense” and is prepared to fight for it. He was particularly critical of the oversupply of Marlborough Sauvignon Blanc in 2008. “The global multinationals had come in and planted thousands of acres because Sauvignon Blanc was regarded as an easy sell. There was no brand building or marketing. But that’s been sorted now and we’re back to a domestic shortage.”

Like a good poker player, Fistonich also trusts his hunches,. In September 2001, he switched Villa Maria’s production to screwcaps against the advice of his accountants and sales and marketing teams. “We had 8% cork taint on our wines and the oxidation rate on older bottles was 30%. I told them it was unacceptable and made an executive decision.” At first, the response from consumers was mixed and included a lot of abusive emails and letters, especially from the USA. Fistonich insisted that his staff reply to every communication, explaining the move. Doggedly, determinedly, he convinced the doubters.

Looking back over 50 years of winemaking, Fistonich thinks that New Zealand is on the right track today. It began by pulling out the hybrids and lesser grapes such as Müller-Thurgau and Seyval Blanc 25 years ago. This was followed by a phase of better site selection, replanting with superior clones and the development of new areas like Martinborough, Marlborough and Central Otago in the 1990s. After that, there was a stage when it was “all about 90-100% new wood, but in the last eight or so years our winemaking has achieved a new level of sophistication, especially with Pinot Noir, Chardonnay and Bordeaux blends”.

And what about Sauvignon Blanc, the grape that dominates New Zealand’s plantings as well as its image overseas? Fistonich believes that Sauvignon is unfairly dismissed as a commodity. “There’s a lot of regional individuality coming through,” he says. “We could hold a Sauvignon Blanc conference every three years, like we do a Pinot conference in New Zealand.”

Being Fistonich, he’s already thinking about the next step. He’s just released his first Arneis, having planted 30 acres in Hawkes Bay three years ago, and thinks that Verdelho, Grüner Veltliner and Tempranillo have potential too, as does Riesling from Waipara and, on a smaller scale, Syrah. “It’s a great grape in Hawkes Bay and on Waiheke Island, but you need very low yields, so it’s almost totally uneconomical.”

And the succession? The next generation of Fistonichs – in the shape of Sir George’s daughter, Karen – is on the board at Villa Maria, but she may not succeed him as CEO. In the mean time, he’s proud that Villa Maria is still family owned and a part of the Family of XII, a group of some of New Zealand’s leading independent wineries.

In any case, he’s fit, trim and doesn’t look like retiring any time soon. “He’s totally driven,” says Steve Smith MW. “He still wants to prove to everyone else that his vision for Villa Maria was right.” Family apart, Fistonich has few interests outside the office and is still dedicated to the company he created. The tyro winemaker who ran those first grapes through a mangle is still the same man 50 years on: focused, hard working, and viscerally attached to the land.

Employment: CEO of Villa Maria since 1961

Favourite wine styles: Italian, Washington State, anything made by the Family of XII