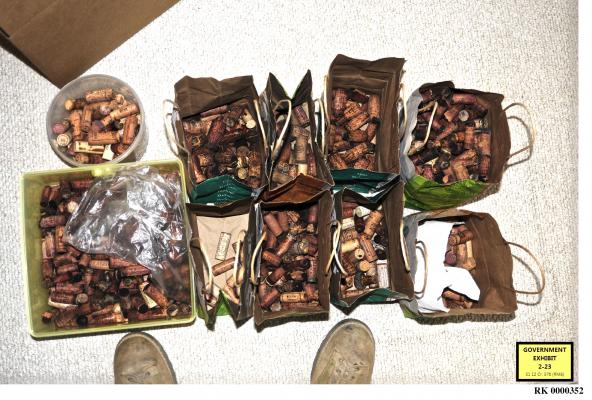 Before watching the documentary Sour Grapes, I had a mental image of American wine collectors as like the effete Crane brothers in Frasier. What I did not expect was what the novelist Jay McInerney describes as the “high-testosterone world of competitive oenophilia”. McInerney was affiliated with a bunch of high-rolling wine enthusiasts who styled themselves “The Angry Men”. Think of Patrick Bateman’s friends in American Psycho only with Grand Cru Burgundy. One of their number, wine auctioneer John Kapon, had the charming habit of referring to wines as “call girls” or “t&a” (tits and ass.)

More sympathetic was geeky Indonesian playboy Rudy Kurniawan who wowed The Angry Men with his astonishing ability at identifying wines blind. He seemed to be able to procure impossible-to-find wines with miraculous ease. Kurniawan became a regular fixture at wine auctions, where he aggressively bought up rare wines to add to his collection. In doing so he changed the fine wine market, making previously pricey wines stratospherically expensive. The documentary charts his dizzying rise and even more dramatic fall. Sadly Kurniawan couldn’t contribute because he’s currently serving ten years for fraud in a Californian prison. Those rare bottles really were too good to be true.

Sadly Kapon too declined to be interviewed, but Sour Grapes features an impressive cast of experts, super rich collectors, investigators and a couple of friends who remain touchingly loyal to Kurniawan. One of the only women in the cast is Maureen Downey, who worked for an American auction house. Unlike most of her peers, she was never taken in by Kurniawan and declined to sell the rare 1950s and 1960s Pomerols he offered her, as he couldn’t prove their provenance.

Other auction houses were allegedly less conscientious. Between 2002 and 2013 Kurniawan sold about $100 million worth of wine usually through John Kapon’s firm, Acker, Merrall & Condit. With Kurniawan’s help, John Kapon took this previously staid firm of New York wine merchants into the big league. Kapon organised rowdy auctions lubricated with large amounts of fine wine. In a climactic moment in the film a Burgundy producer, Laurent Ponsot, appears at a 2008 auction, like ‘Banquo’s Ghost’ in McInerney’s words, to point out that the wines purportedly from his domaine were fake. Kurniawan was offering a 1929 Clos de la Roche when the family firm didn’t start bottling their own wine until 1934.

The wines were withdrawn from sale. It was the beginning of the end for Kurniawan, though it wasn’t until 2012 that the FBI raided his LA mansion and found about 19,000 fake labels, empty bottles, corking machines and wax to seal bottles. They found recipes for the making wine. A rare vintage of Domaine de La Romanée Conti would be made from a $100 Californian Pinot Noir mixed with some humdrum old Burgundy.

The documentary is a colourful ride but asks more questions than it answers. Maureen Downey says that when she first met Rudy in 2001, he was drinking Californian Merlot yet a couple of years later he was able to impress some serious winos with his knowledge of Bordeaux and Burgundy. Kurniawan is a shadowy, Gatsby-esque figure. His name isn’t even Kurniawan, it’s Zheng Wang Huang. After the FBI went through his accounts it turns out he wasn’t a millionaire playboy. He lived a precarious existence on credit and advances from Acker, Merrall & Condit on projected auction revenues.

One expert reckoned it would have taken Kurniawan at least an hour to make each bottle of fake wine. He simply could not have perpetrated fraud on the scale alleged on his own. So either most of the wine he sold was genuine or he had accomplices. His brother and mother appear briefly in the film in a video shot in a restaurant. Investigators discovered that his mother’s brothers were major league criminals in Indonesia.

I spoke with Nick Bartman, an expert on counterfeit goods, and he told me that the “labels on his (Kurniawan’s) bottles were undoubtedly Chinese.” He suspected they came from Shenzhen, the capital of printing and packaging in China. There they have the skills to make even the most complex labels. As an illegal immigrant to the US, Kurniawan could not have left the country, so if Bartman is correct then it means Kurniawan must had at least one accomplice.

The Kurniawan case is not an isolated problem. One of the collectors severely stung by Kurniawan was billionaire Bill Koch who in the 1980s bought bottles of Lafite for $500,000, purportedly from Thomas Jefferson’s collection. They turned out to be fakes sold by Hardy Rodenstock. Laurent Ponsot alleges that 80% of pre-1980 Burgundies are not genuine. Unfortunately, the market for rare wines post-Kurniawan is stronger than ever so there’s always going to be an incentive for forgers.

The FBI now has a division devoted to counterfeit wines. According to Maureen Downey, most auction houses are now much more careful but wine merchants and brokers often aren’t as discerning. She has founded a website called Winefraud.com where merchants and collectors can research their wines for a fee. I spoke with Mark Solomon from American auction house Leland Little and he said that “as an auction house you have to do due diligence. If you don’t, it will hurt your reputation.” Acker, Merrall & Condit, meanwhile, go from strength to strength selling over $69 million worth of wine in 2015, though following a legal action from Bill Koch, they now accept returns on suspect goods.

While Kurniawan serves his time, those who profited from his fakes have escaped serious investigation. One character in Sour Grapes described it as like a game of musical chairs with Kurniawan as the last one left standing. At his trial he pleaded not guilty but oddly made little attempt to defend himself. Unless he comes clean with his version of events, we may never know whether he was just a geeky loner who craved acceptance or the scapegoat for a larger conspiracy. Whatever the truth, it would make a cracking a novel. Perhaps Jay McInerney could write it.

Sour Grapes can be seen at these cinemas in the UK