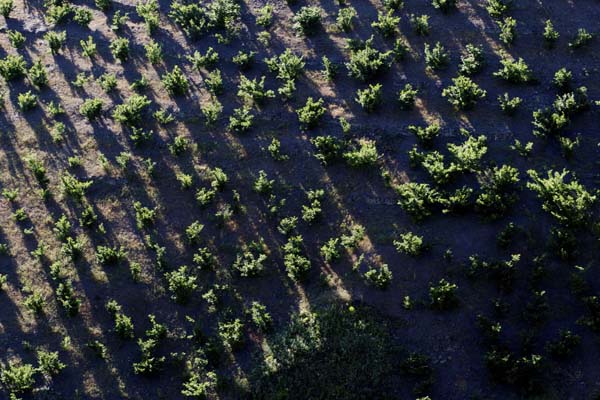 It doesn’t feature on many wine tours, but the village of Bellmunt del Priorat has its very own mining museum, a tribute to a time when lead was more important than grapes to the economy of this wild and isolated corner of Catalonia. The grimy-faced miners, who stopped digging as recently as the 1970s, would surely have felt an affinity with the people who have come here to grow grapes since the region was reborn in the late 1980s.

The latter work above ground rather than below it, yet it’s still a form of hard labour. Priorat is one of the most beautiful wine areas in the world – the hilly quintessence of the Mediterranean landscape – but it’s brutal too. The vines are grown close to the ground, the schist soils are hot and friable and the slopes are famously enervating and abrupt. The 14 kilometres of abandoned mining galleries have been replaced by 1,917 hectares of vineyards.

Priorat’s link with wine is much older than the industrial revolution, of course. The region’s first grapes were planted by Carthusian monks, who came to the area from Provence in the late 12th century, establishing the monastery of Scala Dei, whose ruins still act as the region’s spiritual and viticultural focus.

The area under vine boomed over the years, hand in hand with Priorat’s fame. By the end of the 18th century, it had 6,000 hectares and a reputation for producing powerful reds and rancio-style fortifieds that sometimes reached 28% alcohol. What devastated the region was the arrival of first oidium and then phylloxera; abandoned terraces are still a slightly forlorn feature of the landscape.

Priorat’s renaissance began in 1989, when a group of hippies, dreamers and one or two professional winemakers set up an informal co-operative under the leadership of René Barbier. Five of the original ten members are still producing wine in Priorat – Barbier himself at Clos Mogador, Daphne Glorian (Clos Erasmus), José Luis Peréz (Mas Martinet), Carles Pastrana (Clos de l’Obac) and, most famously of all, Alvaro Palacios of Finca Dofi.

The founding five have been joined by dozens of other winemakers from Spain and overseas, including Miguel Torres from the Penedés, Bernard Magrez from Bordeaux, Dominik Huber from Germany and Laurent Combier and Jean-Michel Guerin from the Rhône Valley. At the latest count, there are 102 cellars and 600 growers in Priorat, compared with a mere handful in 1989. In the space of 25 years, the region’s vineyards have increased nearly threefold.

Attendees at Espai Priorat, a conference held in the region for the third time last week, were asked to name other areas that had developed as quickly or had such a significant impact on the world of wine. No one mentioned Marlborough, although they should have, but the Swartland in South Africa came top of the list.

There are certainly similarities between the two regions – media excitement, dry farming, a significant percentage of old vines and a hot climate – but there are differences, too. Priorat generally sells its wines at higher prices (Alvaro Palacios’ Ermita is one of Spain’s costliest bottles) and has a much smaller vineyard area. You can find bottles of Priorat on supermarket shelves for €8 in Barcelona, but these are the rule-proving exceptions. It’s extremely expensive to grow grapes here, given the low yields and the cost of farming.

In terms of quality, Priorat is often compared with another Spanish region, but it is a very different proposition to Rioja. Priorat, where yields are three to ten times smaller, produces an average of 4 million bottles annually; Rioja makes 300 million. Economies of scale are hard to come by in Priorat. Alvaro Palacios comes close with an estimated 400,000 bottles made from purchased grapes and wine as well as his own vineyards, but most cellars in Priorat have no choice but to make small quantities of high-end wine.

Whether this is profitable is a pressing question for Priorat, another similarity it shares with the Swartland, where even the top growers are struggling to get sufficient prices for their grapes. The Englishman Christopher Cannan, who owns Clos Figueras and has a background in the international wine trade, says that his business just about makes money, thanks to an on-site restaurant and the rooms that he rents out to tourists as well as his excellent wines.

“Prices in Priorat will have to increase,” says Cannan. For the top wines from the likes of Clos Mogador, Mas Martinet, Ferrer Bobet, Alvaro Palacios, Cal Pla, Mas Alta, Terroir al Límit, Familia Nin Ortiz, Cellers Scala Dei, Cims de Porrera, Clos Erasmus, Franck Massard, L’Infernal, Marco Abella and Torres, this shouldn’t be difficult. These are excellent wines that are hard to secure and have a nuanced sense of place based on different soil types, altitudes, aspects and grape blends.

And yet Priorat can be annoyingly inconsistent too. It’s not just a question of vintage variation. A noteworthy number of the 100-odd wines I sampled at Espai Priorat were too oaky, too alcoholic, too pruney, or all three. Priorat has expanded rapidly in the last 25 years, but not all of the new ventures are of equal merit. As those miners would be the first to appreciate, making balanced wines in such a climate requires skill, dexterity and expertise as well as bravery.