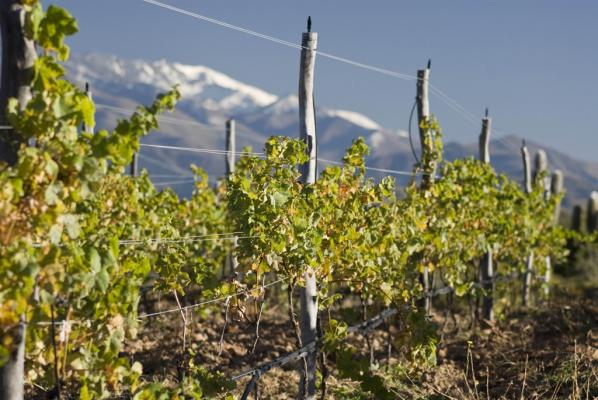 In his wonderful book “BAD: Or, the Dumbing of America”, the late Paul Fussell developed a theory about altitude: the higher the restaurant, the worse the food. It makes a lot of sense when you contemplate the reheated slop that’s served on airplanes these days, assuming you’re not flying at the pointy end of the 747.

Fussell’s law clearly doesn’t apply to wine, except possibly in reverse. There are obviously some good grapes grown at, or close to, sea level, but the majority of the world’s best vineyards are on slopes. As the ancient Roman poet Virgil put it in the Georgics over 2,000 years ago, Bacchus loves hillsides.

For all that, not many vineyards are planted above 1,000 metres. Outside Argentina, the country with the greatest concentration of high altitude sites, there are only a handful of them, in places as varied as Aosta, the Alto-Adige, Cederberg, the Canary Islands, the Elquí Valley and Bhutan, until recently the unlikely location of the world’s highest vines at a giddy 2,750 metres.

The most rarefied spots in Argentina are in the province of Salta, where almost everything is planted at 1,700 metres or above. But that’s nothing in absolute terms. The region is also home to Altura Máxima, the highest vineyard on the planet, at a lung-testing 3,011 metres.

The project would not exist without the drive, ambition and, it must be said, resources of the Swiss multi-millionaire, Donald Hess. He may have stepped down from the day-to-day management of Hess Family Estates, a portfolio that includes Mount Veeder in California, Glen Carlou in South Africa and Colomé (where Altura Máxima is made) in Molinos, but this remains a pet project. Born of an obsession, it will be his legacy.

How the vineyard came to be created is quite a story. Looking for vineyard land in the mid-1990s, Hess travelled north from Mendoza and ended up in the Salta, where he tasted an old wine made by Raúl Dávalos, called Colomé Tinto. He was so impressed by what he drank that he subsequently visited the estate and tried to buy it. The problem was that Dávalos had no intention of selling a property that had been in his family since the early 1800s.

Undeterred, Hess bought a piece of bare land in Payogasta, an hour’s drive from Colomé, convinced that he would find water on the property. Against the odds and local wisdom, he was right, and planted the first 12 hectares at El Arenal in 1999. These were at 2,600 metres and set a new record for Argentina. Hess was dismissed as “loco” (mad), but he wasn’t finished yet.

The man who sold him El Arenal told him about another property called Río Blanco, closer to the mountains and with plenty of irrigation water. The problem was that it was high. Very high. And no one else had ever planted grapes at such an altitude. But Hess took a punt that it would work and bought the land.

In the meantime, Raúl Dávalos had had a change of heart, or rather a change of financial circumstances. The Argentinean economy was in one of its periodic nose-dives and Dávalos took the painful decision to sell Colomé and relocate to nearby Taquil, another family property. His first act of defiance was to install a sign at the entrance to the estate, declaring that it was home to the world’s highest vineyard at 2,597 metres, nearly 300 metres above Colomé.

The unspoken rivalry between the eccentric Dávalos and Donald Hess – the Scott and Amundsen of high altitude viticulture – was one of things that encouraged the latter to plant Río Blanco, renamed Altúra Maxima to make a point, in 2004. Dávalos scoffed that Hess would never succeed in establishing a vineyard at 3,011 metres, but Hess is clearly a determined individual. He cleared a road through the scrubland and put two hectares of Pinot Noir, Chardonnay, Sauvignon Blanc, Merlot, Cabernet Sauvignon and Malbec in the ground.

Encouraged by the quality of the grapes, Hess expanded the vineyard to its current 25 hectares. By 2010, the new Colomé team had its first viable crop, but didn’t like the wines. They tried again in 2011, with the same result. But in 2012, it all came together, despite the fact that it was a difficult vintage. “That’s when we knew the site was special,” says vineyard manager, Xavier Grané.

I tasted three unbottled wines from the property a year ago – a Sauvignon Blanc, a Pinot Noir (both 2014s) and the 2012 Malbec that had convinced Hess, Grané and winemaker, Thibaut Delmotte, that Altura Máxima was going to work – and they were all very good indeed. The Malbec, in particular, is one of the finest examples of the grape I’ve ever tasted. And this from five-year-old vines.

The Malbec is being released in America this week. I bumped into Thibaut Delmotte again at Salta airport and he looked nervous. “Five tasting a day for a week in New York,” he told me. But he needn’t worry. The highest vineyard in the world is much more than a rich man’s ego trip. It’s a truly great site.