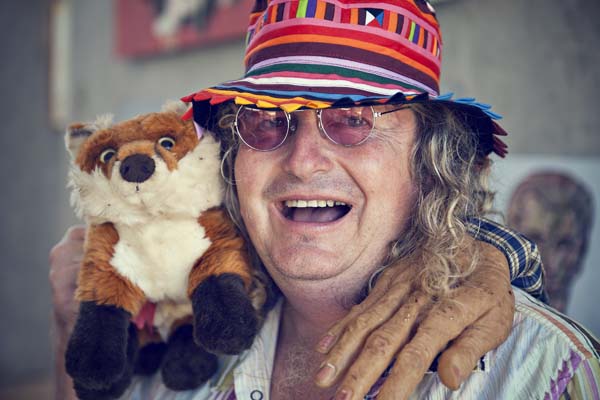 There can’t be many world-famous wineries founded by teetotalers, but d’Arenberg in McLaren Vale is one of them. Despite working in the industry as company secretary at Thomas Hardy & Sons for 30 years, Joseph Osborn hadn’t touched a drop of booze when he purchased an established South Australian vineyard in 1912. Even with access to his own wine, his abstinence didn’t waver.

The irony isn’t lost on Joseph’s grandson and great grandson, d’Arry and Chester Osborn, both of whom enjoy a drink as well as a joke. The more recent generation of Osborns sure know how to have fun. Every year they throw a bash for the growers who are such an important part of their business, widely touted as one of the best nights in the local social calendar. The party they held to celebrate their 100th anniversary was even more extravagant: it continued until 8am the next morning, fuelled by dozens of famous bottles from Chester’s cellar.

D’Arry and Chester are a winning duo. There are plenty of combustible father/son relationships in the wine trade, primed by jealousy and rivalry, but theirs is different The two genuinely seem to enjoy working together, combining their contrasting personalities: Chester a showman with a love of art and an aversion to detail, d’Arry more laconic, canny and business-minded. Watching them together is like observing a rock star and his exasperated, yet ultimately indulgent manager. “We don’t really fall out,” says d’Arry, “although we might disagree a bit. I’m a fairly easy going sort of guy, and so is Chester.”

Together, the two men have made d’Arenberg one of the leading family-owned wineries in Australia, a company that is innovative, creative and (that word again) a lot of fun. It’s not just the names of their wines: The Bamboo Scrub, The Fruit Bat, The Shipster’s Rapture, The Malaysian Swinger, The Feral Fox and so on. Nor is it just Chester’s clamorous shirts, unruly tresses and bag full of props. It’s an ethos that seems to permeate everything they do. “My wines are quite loud,” says Chester, “with plenty of character. And I love drinking all of them.” So, it should be said, do other people. At every level, D’Arenberg’s wines offer some of the best value in Australia.

To a casual observer, d’Arenberg’s success might seem fortuitous, but it’s based on tenacity and hard graft. D’Arry joined the business in his mid-teens, taking over from a father who had never recovered from the trauma of the First World War. By the time Frank Osborn died in 1957, the company was “struggling to make a crust”. Yet d’Arry turned the winery around, changing its name from Bundarra Vineyards to d’Arenberg (his mother’s maiden name) and bottling his own wines, rather than selling them off in “stone jars, kegs and barrels”.

It was d’Arry who created his legendary “Burgundy” (subsequently renamed d’Arry’s Original, but still a blend of Grenache and Shiraz) and came up with the red stripe that adorns the company’s multiple McLaren Vale labels to this day. He learnt how to run a business as well as make wines, working long days to achieve his goals. Even today, at 86, he describes himself as “only semi-retired” and still controls d’Arenberg’s finances. “I work six days a week now,” he laughs.

Like many fledgling Aussie winemakers at the time, d’Arry had no formal training. “I was selling some of my wines to Hardy’s and Angoves and they used to analyse them for me, even the ones they didn’t buy. And they would say ‘do this or do that’. Otherwise, I just got on with it.” The combination of empiricism and advice paid dividends. D’arry’s wines were popular and won awards, too, not least the Jimmy Watson Memorial Trophy, which is given each year to the best young red at the Melbourne Show, in 1969.

And yet the wines had begun to seem a little earthy, feral and old-fashioned by the early 1980s, just as Australians began to turn to more vibrant, fruit-forward styles. D’Arry had no hesitation in handing over the winemaking to Chester, who had studied at Roseworthy, Australia’s leading wine school. “It was crazy,” says Chester of his father. “He did everything by the seat of his pants. There was no lab in 1984, just a rusty pH meter that had never been used. The old guys measured temperature and sugar levels and that was it.”

Chester installed refrigeration, gentler crushers and a lab, but the change of style was not as radical as some people claimed at the time. “We’re still making wine exactly the same way dad did: same vineyards, no fertilizers, no cultivation,” Chester told Australia’s Wine Business Magazine in 2009. “We’re still using the open fermenters that were built in 1927; we still use foot treading and most reds are not racked, with no fining or filtering; and we still basket press every grape.”

For all that, the wines are much better and more reliable these days, partly because Chester is a trained winemaker, but also because he seems to have an innate flair for the job. He loves everything about it, from tasting the grapes in the vineyard to blending the finished wines, endlessly trying out new fractions and combinations like a boy with a new chemistry set. “When you taste the grapes, you’re looking for minerals, for acidity, for life and tannin structure, as much as sugar and fruit. You can see exactly what the wine is going to taste like. Wineries need personalities, but they also need good vineyards.”

Chester’s other great skill is marketing. Wine writers love him because he’s chatty, friendly and never short of a good sound bite, but so do consumers, who enjoy his exuberance and warmth as well as the quality of his wines. Under Chester, d’Arenberg has become a global brand, respected and talked about from Adelaide to Arizona, Hong Kong to London. To many people, he is d’Arenberg: among the most recognisable faces in the wine world. In time, one or more of his three daughters (Alisha, Ruby and Mia) will surely join the family business, but they are still at school for now and Chester is having way too much fun.

In fact, one persistent criticism is that he makes too many wines, putting his own amusement before the good of the company. Even Chester isn’t sure how many brands there are and admits he’d be bored if he produced only 20, instead of 60 or more. But to him, more is more, not less. “The more wines I make, the more fun it is and the more flexibility I have. More wines means more opportunities to make something great.”

Has he achieved greatness? Tasting through a range of the company’s wines, you’re impressed by the number of hits, despite the odd miss. Chester is best known for his reds, particularly The Dead Arm Shiraz and The Ironstone Pressings GSM blend, but he’s pretty adept with Chardonnay, Riesling and white Rhône blends, too. And yet there’s a sense that his and d’Arenberg’s best wines are still to come, quite possibly from the multiple, sub-regional Grenache parcels he is currently working with in McLaren Vale. One thing is for certain, though. When Chester Osborn makes something that he and d’Arry both adore, they’ll drink it. More to the point, they’ll share it too.

D’ARENBERG AT A GLANCE

Number of different labels: Over 60

1912 Joseph Osborn buys 49 acres of established vineyards in what is now McLaren Vale from the Milton family and installs his son, Frank, as winemaker

1928 Frank completes the construction of the winery’s first cellar, making dry red table and fortified wines under the Bundarra label

1957 d’Arry takes over the running of the business, launching his own label (d’Arenberg) two years later

This unoaked wine is all about freshness as well as depth of flavour. The temptation in the Mediterranean climate of McLaren Vale would be to produce something fat and oily, but this combines the subtle apricot notes of Viognier with the refreshing herbal tang of Marsanne. Skillfully blended.   Drink: 2013-2015 Alcohol: 13.1%

The wine that launched modern d’Arenberg, way back in the late 1950s, is as good now as it’s ever been, still delivering great value for money. It’s a typically soft, flavoursome red, with notes of liquorice, plum, blackberry and sweet spices. The oak is present, but it doesn’t dominate the fruit richness. Drink: 2013-2017 Alcohol: 14.4%

Cabernet is an under-rated wine in the d’Arenberg portfolio, showing structure and perfume as well as the winery’s characteristic abundance of flavour. The balance of this wine is impressive, with cassis and bramble fruit, attractive oak, supple, medium-weight tannins and refreshing acidity. Drink: 2013-2025 Alcohol: 14.5%

Made from Grenache, Shiraz and Mourvèdre were made for McLaren Vale, which is why this wine delivers on an annual basis. It’s a pretty serious blend, with plenty of concentration and firmer tannins than many d’Arenberg reds, but the spicy, incense and black fruit flavours add flesh to the bones. Drink: 2013-2025 Alcohol: 14.5%

Dead Arm is consistently Chester’s best wine, and this is a typical example of its old vine concentration. Sweet, dense and rich, but somehow poised and refreshing at the same time, with integrated oak, a hint of grilled meat and bright violet, plum and blackberry fruit. As good as the brilliant 2006. Drink: 2013-25 Alcohol: 15%