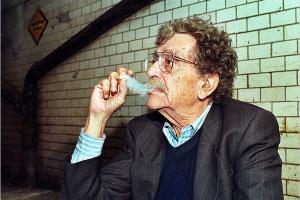 One of my favourite cuttings, passed on to me by my father more than a decade ago, first appeared in an unlikely place: Inc. Technology magazine. It’s an interview with the late Kurt Vonnegut, best known for the satirical novel Slaughterhouse 5, about living in an increasingly digital world. The piece is pinned to the noticeboard beside my desk, providing me with a sense of perspective about what matters in life.

Vonnegut describes why he liked to use a typewriter rather than a computer, choosing to send his articles by post. Each time he would stroll across the street to buy a single envelope, chatting to the people waiting in line to purchase magazines, lottery tickets and stationery. Then he would go to the post office on the corner of 47th street and 2nd Avenue, where he was “secretly in love with the woman behind the counter”. He would stamp the envelope, put it in the post box and walk home, having had “a hell of a good time”.

I thought about Mr Vonnegut more than once during last week’s rash of Burgundy tastings in London. I managed to attend 14 of these in five days, partly because it’s my job (I’m working on a report about the 2010s to be published on this site next month), but also because they were so pleasurable. 2010 is a very good vintage and the tastings were a chance to chat to some of the greatest winemakers on the planet while I sampled their wines. Given the choice, I’d rather spend an hour in their cellars or vineyards, but London is fun too.

Burgundy is such a complicated region – try differentiating between all the branches of the Morey or Rossignol families or remembering the number of vineyards called Clos du Roi – that the best way to pick your way through its intricate, filigree web is to ask questions. What’s the soil type here? Where are your vines on the slope? How late were the malolactic fermenations? Any whole bunch this year?

Some of these queries stray into geek territory, but that’s only half the point. I enjoy shooting the breeze with Burgundian winemakers because, in most cases, I like their company. Understanding them helps me understand their wines a little better. To get to know someone like Sylvain Cathiard, one of the region’s superstars, takes time. He’s shy, self-deprecating and has a slight stutter. I had the good fortune to taste his wines in Burgundy in early January, but I bumped into him five further times last week. I’ve always loved his Pinots, but the more I learn about him, his vineyards and family history, the better they get. Burgundy, arguably more than any other wine region, is all about people, which is ironic given that it’s famous for its terroirs.

I had lots of great conversations last week. At the Corney & Barrow tasting I talked to Adèle and Elsa Matrot, two sisters who are taking over the family domaine in Blagny. We chatted about their dad, a man I’ve known for more than 20 years, about their sister, Eléonore, who’s running Le Chevreuil hotel and restaurant in Meursault, about the style of their wines and about the nuances of the Blagny appellation: if it’s red, it’s Blagny, if it’s white it’s Meursault Blagny. Like Kurt Vonnegut, I was having a hell of a good time, but I was also gleaning valuable information.

Indeed, that combination is why I became a journalist. I like asking questions, but I’m also gregarious. It’s the human stories that make wine come alive for me, that relationship between men and women and the vineyards they own and work. Of course, it’s the liquid in the glass, too, but the one is informed by the other. Is it a coincidence that I tend to enjoy wines made by people I like? I don’t think so.

Something else made me think about Kurt Vonnegut last week: computers. No professional tasting is complete these days without the tick, tick, tick of one or more wine hacks tappping notes into a laptop. I don’t have a problem with this – people have websites to update, subscribers to satisfy – but sometimes I feel the endless compilers of notes have missed the point of tasting and assessing wine, let alone enjoying it. Many of them would learn more from a five minute conversation with the Matrot sisters or Sylvain Cathiard than from sipping and describing their 150th wine of the day.

This rather literal emphasis on the wine in the bottle, generally at the expense of people and places, used to be largely American, but it’s gone international. Jay Miller, until recently the Wine Advocate‘s critic for the wines of Argentina, once told a vineyard manager who asked if he’d like to see some new plantings that “I don’t do vineyards”. At least Miller went to Argentina to taste. All too often these days, wine critics don’t see the need to travel at all.

Where will it all end? In the future, perhaps someone will develop a programmable computer with a funnel attached. All you will have to do is pour in the wine and it will craft a tasting note in the style of the individual journalist. Part of me thinks that Vonnegut, who wrote good science fiction, would have found the idea amusing. But another bit thinks he’d have been appalled by what’s happening to wine writing. It’s time we stopped tapping and started talking again.