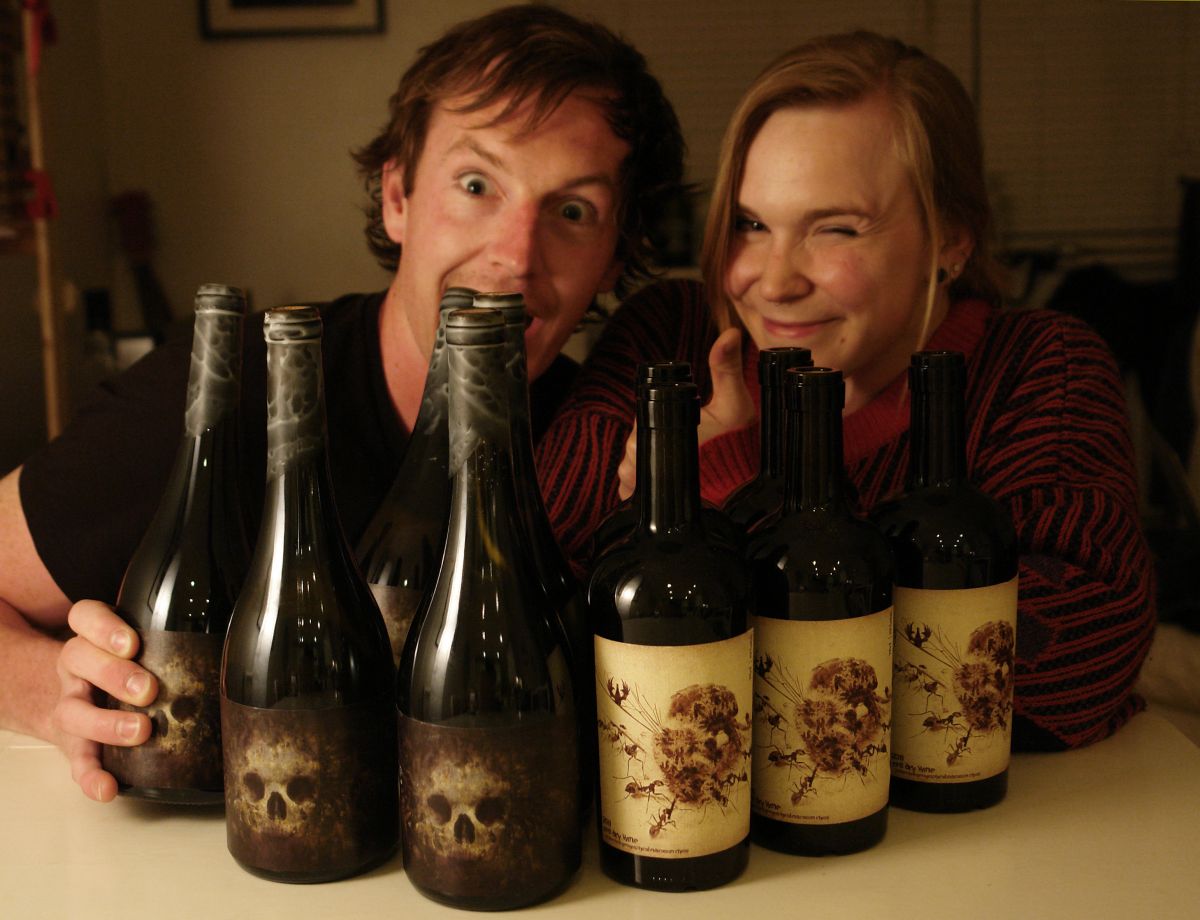 One wine, in one place, for one year only. It’s hard enough making wine in the same place each year, so as winemaking philosophies go it doesn’t get much more ambitious. But since graduating three years ago with degrees in winemaking Nick Jones and Leah de Felice Renton have stuck to it. As a result, their output is unusually disparate; so far the range of wines that they bottle under their Wine of Momentary Destination (WMD) label contains a Roussillon Syrah, a Mosel Riesling, an Istrian Cabernet Sauvignon (and even a gin). They control everything; they buy the fruit, make the wine, design the labels and sell the finished product. Each year presents a unique set of challenges; poor weather, shysters – even poltergeists. But so far the results have more than justified the means.

Nick’s current work is making mead in Peckham. It sounds like the most hipster job imaginable, but that’s not their style. Sampling their wines outside a bar in south London felt more like chatting to new-found friends at a festival. Nick and Leah met at an Oddbins staff training course in 2009. Soon after, they decided to take their love of wine to the next level, and enrolled on viticulture and oenology degrees at Plumpton College in Sussex, UK. Graduating in 2012, they took temporary winemaking positions at a small domaine in the Roussillon, southwest France. While they were there, Leah inherited a sum of money; she decided the best way to invest it was to buy some grapes and make their own wine in their spare time.

They put the word out at a busy café in a nearby village that they were looking to buy some fruit. After much whispering and backward glances from the locals, the pair of English twentysomethings were approached by a local man who smilingly shepherded them to a knackered vineyard and offered them some sorry-looking grapes. They gave him a second chance and this time he came up with a more convincing proposition, so they rented tanks and equipment at nearby Domaine Vella Frontera in order to make the wine. The result was Fuse – 777 bottles of Vin de Pays des Côtes Catalanes made from 100% Syrah. It went down well back home, and within a few months they’d sold the lot.

They decided to plough the proceeds into another wine the following year but on a larger scale. Although they had never worked with Riesling before, this time they found themselves in the Mosel in Germany. For Leah “the challenges were huge, but it really stretched us as winemakers”. Nick adds that “you really have to think on your feet,” but working in this way is possible thanks to a mix of different ingredients: winemaking degrees, previous experience, a lot of reading and a bit of instinct. “Follow the instructions and it will all be fine!” states Nick, with a slightly nervous grin.

But there are some eventualities you can’t plan for. The tasting room at the winery where they were renting space to make their Riesling had some unusual decorations; a human skull and two leg bones over the door. They were ploughed up by the owner’s grandfather in the 1970s who previously kept them on his bedside table as good luck charms. Nick and Leah held a party in the tasting room for friends that came to help them harvest the grapes; towards the end of the party things took a turn for the weird. An internal window started gradually opening and closing of its own accord; when they tried to open it themselves it wouldn’t budge. They tried to calm themselves down with various rational explanations; but that wasn’t so easy when cupboard doors started bursting open. Leah didn’t believe in ghosts before; “I do now”. They named the wine The Spectre in its honour.

Working with new varieties in different regions each year has given them plenty of other stories; the Istrian Malvasia/Chardonnay that they worked on last summer is called The Will to Live “because we nearly lost the will to live” says Nick. The weather was so awful while he was there he had to switch plans; he ended up making an Istrian Cabernet Sauvignon instead. This is one benefit of their modus operandi; “you can be flexible… you’re not at the mercy of Mother Nature” to the same degree as owning a specific vineyard plot. “We have the option to pull the plug or look elsewhere if we need to.”

The Istrian deluge prompted them to make a back-up wine just in case all was lost. It was too late to make something from scratch so they decided to create a second label, Birds & Bats, for wines that they’ve sourced and blended but didn’t actually make themselves. This time they found themselves on the Greek island of Chios near the coast of Turkey. Their first release is Three Years Down, a blend of two grapes indigenous to Chios (Chiotiko Krassero and Ayanittis – no, me neither) that spent three years on oak; two in French barriques followed by a third in Bulgarian puncheons.

Producing wines with big consumer followings clearly isn’t their number one concern, but unusual bottle shapes, distinctive handmade labels and strong branding all help the wines to stand out. They also detail all the ingredients and equipment they use for each wine on their website which gives you a unique insight into the winemaking process and the decisions they took along the way. This year they are opening up their Wines of Momentary Destination project to some old Plumpton classmates; 2015 destinations will be Priorat and Slovenia. The regions that they choose are often dictated by where they happen to be working that year, but Nick’s dream destinations would include Mallorca, Yarra Valley and Georgia; Leah would choose the Pfalz, Willamette Valley and English sparkling.

There is a certain satisfaction in following the wines of an old, established estate. You look back down the years and sense the lineage, the experience amassed through generations, the gradual honing of a style. Above all, you know what to expect. Clearly this isn’t something you enjoy when following WMD: rather than looking back, this is a young winemaking outfit that is always looking forward. Buy a bottle from them and it could contain anything imaginable. What you can rely on, however, is a well-made, characterful wine made in a small batch by a pair of committed wine lovers in a transparent fashion. The UK wine industry has long looked outside its own borders towards the best from other countries; so perhaps it’s not surprising that some of our home-grown winemaking talent is doing the same thing.

Birds & Bats ‘Three Years Down’ 2011 (Chios, Greece; 13%)
DVine Cellars, £27.00
A blend of Chiotiko Krassero and Ayanittis, tannic grapes that need long wood ageing. Crunchy cranberry and black cherry fruit with a distinctly floral (violet and iris) element, some bergamot and cinnamon spice. Grippy, no-nonsense tannins, firm acid and a savoury finish. Very drinkable and refreshing with lots of angles and detail. A blend of the floral, the earthy and the tannic that appealed to the Nebbiolo-lover in me. 91 points.