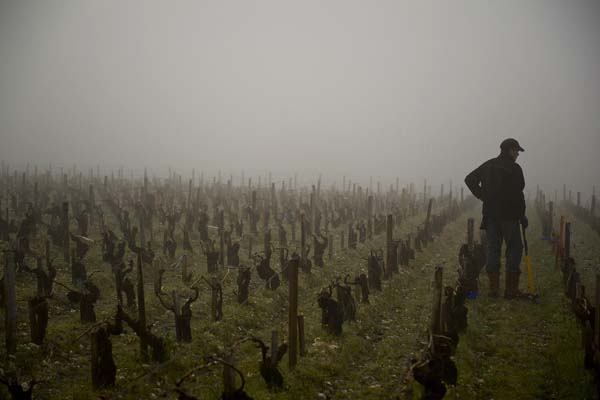 Moaning about the weather is practically a national sport in England. There’s a bit of me that thinks that we enjoy being grumpy, “coveting disappointment” as the comedian Bill Bailey once put it. And yet the last 12 months have been anything but enjoyable. The rain, the snow and the lack of sunshine would have tested the optimism of Voltaire’s Dr Pangloss, who famously declared in Candide that, “all is for the best in the best of all possible worlds”.

Has this been a blip, a set of seasons to delete from the collective memory bank? Or has our notoriously fickle climate become even less reliable? The second possibility is much scarier, and not just for people who work in the tourism, leisure and agricultural industries. If what we have experienced is the new reality, then emigration beckons.

I’m no climatologist but we are not the only ones suffering from unpredictable weather patterns. I’ve just returned from a wet and chilly week in Bordeaux tasting the 2012 vintage en primeur. Two years ago, the temperature gauge hit 38°C in early April; this year it struggled to reach 18°C as we shivered in scarves and coats. If the 2013 growing season continues like this, châteaux will be picking Cabernet Sauvignon in December.

Globally, the long-term climatic trend looks considerably more predictable, undermining my anecdotal evidence. To put it bluntly, the planet is getting warmer. And as “Climate change, wine, and conservation”, a paper published in the Proceedings of the National Academy of Sciences last week, makes clear, “the impacts of climate change on viticultural suitability are substantial”.

The report is mercifully short – we non-scientists can only take so much talk about impact pathways, multifactor models and freshwater impact indexes before our eyes glaze over – but it makes some important, and potentially alarming, predictions about the future of the wine world.

If the scientists are correct, huge swathes of land that are currently suitable for grapes – and produce many of the planet’s best wines in areas such as California, Australia, South Africa and Mediterranean Europe – will see sharp falls in production. By 2050, Mediterranean Europe and the hotter parts of Australia could lose as much as 68% and 73% of their grape growing areas, respectively, to hotter growing season temperatures and lower rainfall.

The findings are based on 17 climate models (I’ll spare you the details) that measured the impact of global warming on nine major wine-producing areas, using an increase in average temperatures between 2.5°C (the best we can hope for) and 4.7°C (the worst case scenario). All predictions, however well researched, have an element of uncertainty, but these look credible to me.

Interviewed by The Guardian’s Suzanne Goldenberg, Lee Hannah, one of the report’s authors, argued that, “climate change will lead to a huge shakeup in the geographic distribution of wine production. It will be harder and harder to grow those varieties currently growing in places in Europe. It doesn’t necessarily mean that they can’t be grown there, but it will require irrigation and special inputs to make it work.” Cue mass investment in reverse osmosis machines…

Inevitably, some cooler and more marginal grape growing areas will benefit from climate change, New Zealand and northern Europe being a case in point. The American authors make a case for new areas, too, such as the Rocky Mountains between Yellowstone National Park and Canada’s Yukon Territory. I’ve seen previous studies talk about Denmark and Ireland as possible future wine areas.

How urgent is all this? The authors say that, in some regions, it should be a “high priority”, as much for the increased pressure on water resources as for the impact on traditional grape-growing areas. And then there are the possible environmental consequences for as yet undeveloped regions.

The surprising thing is how little attention the wine trade is paying to all this, preferring to stick its head in the sand, clay, limestone or schist than confront reality. Who is planting vineyards at altitude or on cooler slopes (north- or south-facing, depending on the hemisphere in question)? Who is developing drought resistant rootstocks? Who is looking at dry farming in irrigated areas? Such research might sound alarmist, but 40 years is not a very long time in viticultural terms, given that it takes 15 years to establish a half-decent vineyard.

We should also be considering what the scientists call a “managed retreat” to other varieties. As temperatures rise, Tempranillo might be ideal for Bordeaux, Syrah for Burgundy, Merlot for Marlborough, Chardonnay for the Mosel and so on. Traditional grapes will still be grown in these regions, albeit at extra cost and effort, but the new varieties could invigorate the wine business. And then there’s the prospect of cuvées from Denmark and Yellowstone Park. The future of the wine business may be uncertain, but it definitely won’t be boring.