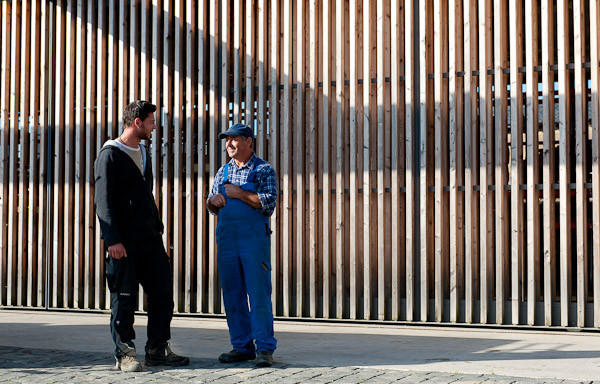 Question: which country is the world’s third biggest producer of Pinot Noir? I’d always imagined the top five would be France (Champagne boosts the numbers), the USA, Australia, New Zealand and Chile. But on a visit to Germany earlier this year, Steffen Schindler of the German Wine Institute put me right. The answer, believe it or not, is Germany, behind France and the USA.

That wasn’t the only thing that surprised me about German Pinot Noir. The other, more important thing was the impressive quality of the top wines. The words world class are over-used. But these Pinots were just that. Why don’t we see more of them in the UK, I asked the winemakers? “Germans drink them,” was one response. “You can’t afford them,” another.

Hamish Anderson, the head sommelier of The Tate and my travelling companion, and I came up with a suggestion. Why didn’t the German Wine Institute put on a blind tasting of German Pinots in London and pit the best of Germany against some of the world’s top Pinots? To their credit, the Germans agreed.

Hamish and I went back to the Rheingau in September to blind taste nearly 400 samples with five German colleagues. After a day of hard tasting, we came up with 20 wines to represent the best of German Pinot. To our amazement, one producer (Weingut Ziereisen) had three wines in our selection. The man is a superstar, whose Pinots are up there with the very best.

Our next job was to come up with a list of international competitors. I’d just been to the International Pinot Noir Celebration in Oregon, so I had a number of names in mind. We wrote to all of them asking for samples, making it quite clear that the idea was to blind taste German Pinot against the best Pinots from elsewhere. Everyone said yes, which tells you a lot about the wider Pinot community.

How did we make the selection? To reflect the balance of power in the Pinot world, we chose three each from New Zealand, California, Oregon and Australia and one from Chile, Argentina, Austria, Switzerland and South Africa. In most cases, I tried to choose wineries with a track record. The exception was Oregon, where I picked one wine (Antica Terra) that really impressed me at IPNC.

This left the three Burgundies. Here, producers and importers were less keen to help. What was in it for them, they wanted to know? There was also the matter of vintage. The 2008s are on the lean side (less likely to show well in a blind tasting), while the vastly superior 2009s are too young. That’s why we picked 2007, a lighter, more approachable vintage. In the end, we were given wines by OW Loeb and Flint Wines and bought a third at cost from Howard Ripley. Our three domains, all excellent, were Dujac, Hudellot-Noëllat and Fourrier.

We tasted the wines in five flights of eight. (To be strictly accurate, one of the German wines – the 2009 Weingut Schumacher Herxheimer Himmelreich Spätburgunder – didn’t arrive, so we only tasted 39 wines.) Based on over average scores, 13 wines went through to the final round. Some of my top scoring wines didn’t make it (I’ve listed my first round scores for the wines that weren’t selected below). But the overall quality was very high.

We then retasted our top 13 and each ranked them in order of preference. After the scores had been totted up, we unveiled the winners. (I’ve included my scores for the winning wines from both rounds.)

It’s no exaggeration to say that the results were a revelation to the group. The wine that came top – the brilliant 2009 Antica Terra – was our overall favourite in both rounds. Our second wine was from Au Bon Climat in California, which I preferred (from a different bottle) in round two, followed by the 2008 Winzerhof Thörle Spätburgunder Hölle and four other German wines. Overall, there were seven German Pinots in our top 13, including two from Weingut Ziereisen, the revelation of the pre-tasting in the Rheingau.

Germany outscored New Zealand, Australia, Burgundy, Oregon, Austria and California combined. As I’ve said, there were some other wines that deserved to be in the final enclosure, at least in my view, but it wouldn’t have changed the overall result. Many of my favourite (non-shortlisted) wines were German, too.

What does this say about German Pinot Noir? Well, it proves what Hamish and I thought when we tasted some top examples earlier this year. They really are world class. If only the Germans didn’t keep most of them to themselves.

THE WINNERS (including my scores from rounds one and two)

We also tasted (my scores in brackets)