In the Wine And Novelty Corp. boardroom, the atmosphere was tense. Behind Warner Biggereturne III, the company president, the chart on the electronic whiteboard said it all: wine division sales had dropped for the third consecutive quarter. Worse still, so had profits. Across the big shiny table, sales manager, Des Parate, was trying to deflect his boss’s wrath. “The trouble is that we no longer have the products consumers want” he said. “And that’s true for the Fruits, the Newts and the the Cutes”.

Like most big wine companies, since 2012, WANC had divided its products and their buyers into three sectors. As their name suggested, the Fruits focused on wines with obvious flavours such as pineapple, peach and boysenberry that resulted from being made from grapes like Sauvignon Blanc, Chardonnay, Zinfandel and Cabernet Sauvignon. Newts were the “Neutrals” mostly produced from Pinot Grigio, though with a growing trend towards other flavourless Italian and Spanish varieties. As for the Cutes, these were the unashamedly, female-focused sweet wines that competed with brands like Apothic, Menage a Trois, Little Black Dress, FlipFlop and Cupcake.

“We’ve tried almost everything” Parate continued. “We’ve used every clone of every variety that’s currently obtainable; we experimented with over 1000 flavour-enhancing fermentation yeasts and enzymes; we’ve roto-fermented, flashed, egged, we’ve added gum arabic, gum chinese and gum latvian; Mega Purple, Mega Red and Mega Tartan. I don’t know what else we can do.”

Biggereturne glared at the dozen or so other executives around the table daring them to speak. Finally, a ginger-haired intern called Ivor Nidea standing at the back of the room hesitantly cleared his throat, “What…” the young man stuttered, “… if… we… took a more… radical… step?”

Realising that he had the audience’s attention, Nidea continued. “When you look at what most of our customers are buying – strawberryish pink Zin, sweet, grapey Moscato, watery white, sugary red… it really looks as though they really don’t like stuff that tastes like wine… So, maybe we should… begin to move away from all this focus on… grapes”

“What are you suggesting?” asked Massy Ration, the production chief.

“Well…” said Nidea, “I’ve looked at costs, and I reckon we could largely switch from grapes to fruit juice, fruit flavouring and water. We’d save lots of money and we’d give our customers stuff they’d actually prefer”

“Okay… but what do we do about the Newts?”

“Oh, that’s easy. We just add water. I’ve even come up with a promotional plan. We could sell it as being L’Eau Calorie and L’Eau Alcohol…. And for the Cutes, we just add more sugar.

A thousand miles away, the owners of Château de Fence-Dafficher were facing a similar crisis. “It is all the fault of Sarkozy, Hollande, Merckel, les Americains, les Anglais… fumed Henri Grette-Beau-Coup We are finished! At the rate we are going, we will be bankrupt by the end of the year. Our family has been making wine in the Cotes d’Arrogant-et-Chauvin appellation since 1176 but we’re struggling even to get €2 for a bottle. When the government stops giving us €0.50 in July, we’ll be making a loss of €0.49.”

It was then that little Marie-Mee the quiet spinster daughter who spoke in Franglais because she was a Poste-Moderne kind of fille, finally plucked up the courage to speak. “Papa” she said. “I have une idée”.

“If we look back”, she said, “some of our most profitable millésimes have been ones like 2011 when we have produced large quantités of wines that were franchement not very nice. And then, think back to that Expo where we presented nos vins last year. The critiques who tasted them seemed to be much more seduced by Domaine Goutdelamerde”.

“Domaine Goutdelamerde!” spluttered the old man, “but those wines are… disgusting. Their white wines are cloudy and orange and their reds smell of pigsties!”

“Précisement”, said the girl. “It’s because they’re ‘naturel’. People seem to like them – and pay higher prices for them. Maybe we should do the same, but possibly going even further.”

“Well, instead of fermenting in silly clay pots like they do, I was thinking that we could maybe simply dig a hole in la terre. We could be les premiers to introduce the ‘open-top-mud-fermenter’. Just think of the terroir character we could talk about if the juice was actually in contact with the same clay and chalk as the vines. It would also help to make it cloudier. The critiques like that, and they’d like it even more if the cloudiness came from real earth!”

“And,” she went on, “for our ‘Super-Naturel’ wines, I think we could be very clever about le packaging… After all, what is ‘naturel’ about glass bottles? I think we should revive the tradition of selling wine in sheep-stomachs, what the Spanish call ‘bota’. If we really work at it, we can remove all the fruity character and replace it with the intense vinegary shittiness that the critiques so admire.”

Both WANC and Château de Fence-Dafficher did so well from these ideas that Ivor and Marie became superstars of the global wine industry. Inevitably one day, they ended up speaking at the same conference. The moment Ivor, who was (as you’ll have guessed) now owner and CEO of WANC, saw the young – well not so young really – Frenchwoman, he was bowled over. Within weeks, the two were married and their businesses merged and everybody lived happily ever after.

All this is of course a fairy story, but within it, you may find just a few grains of truth. The concept of Fruits, Newts & Cutes may be a figment of my fevered imagination, but Apothic, Menage a Trois, Little Black Dress, FlipFlop and Cupcake are all highly successful brands in the US. Similarly, on January 4, 2013 there was a real merger between two very different wine companies when Winery Exchange announced that it had bought Orleans Hill. Winery Exchange, for those who are unfamiliar with the name, describes itself as “the only full-service, national and corporate brand, beverage alcohol company that sources beer, wine and spirits from the finest regions worldwide… founded with the intent of blending extensive industry expertise with cutting-edge business practices. The result is a dynamic, fast-growing company poised to take advantage of new trends in the beverage alcohol industry.” Its brands include Ogio, Mrs Beachley’s Mulled Wine and Dune Buggy Moscato.

According to the Orleans Hill website, Tony Norskog the winemaker aims to “hand craft wines with distinct characteristics, all the while eschewing chemicals and preservatives”. Unlike Marie-Mee, he currently seems to be focusing on “delicious and approachable” wines under brands such as “Daily Red”, but if the market for more “challenging” styles grows as rapidly as some sommeliers hope, I am confident that Winery Exchange will well be ready to supply the demand. 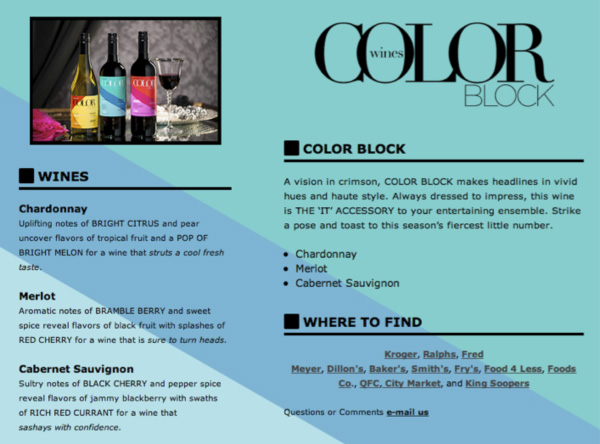 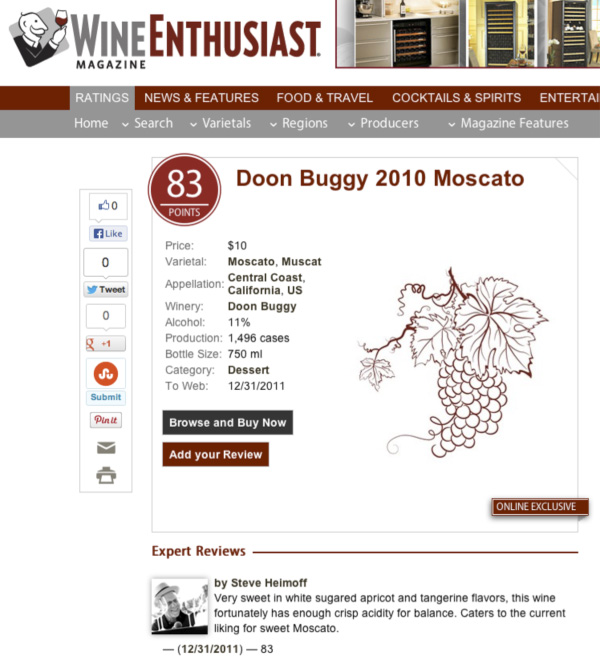 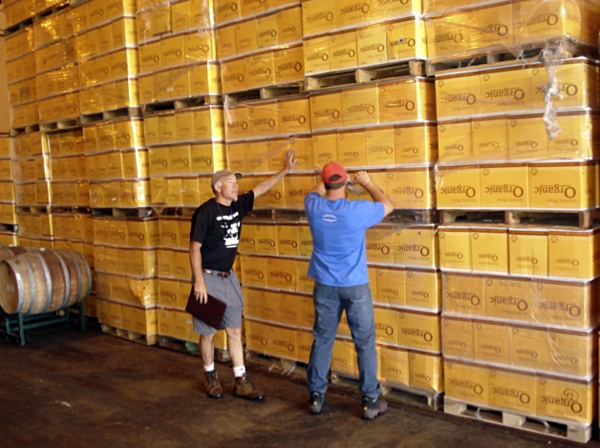 Tony Norskog of Orleans Hill with some of the 150,000 cases of organic wine he produces every year. 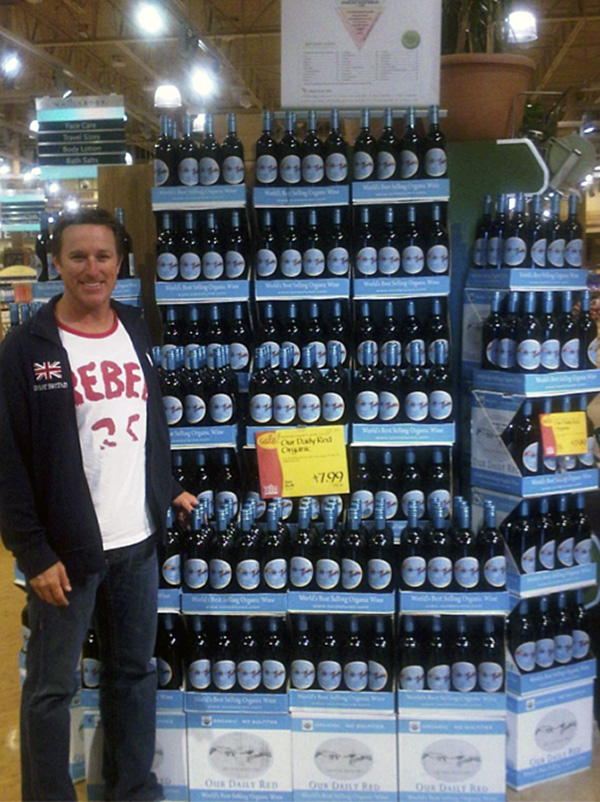 Our Daily Red Organic, piled high in a US supermarket