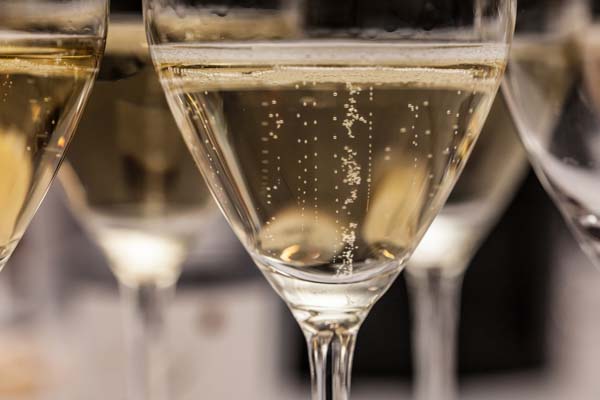 With some big names in sparkling wine on five continents billed to speak at Denbies for this, the third and largest yet ISWS, the gathering mood was of course one of ….Great Expectations! Viewed soberly post-Christmas, this conference did have mighty peaks, though there were deep troughs as well.

Essi Avellan, the Finnish MW, began with a tasting of 16 of her favourite wines worldwide, all made sparkling by the traditional method. My wobbly faith in Cava was restored by an upright Cordorníu Gran Reserva Chardonnay 2007 from high Costers del Segre. The admired Schloss Gobelsberg Brut Réserve, Kamptal, Austria was everything it should have been – full, rich, firm Grüner Veltlinger (55%) given the electric verve of added Riesling and supple poise of Pinot Noir in a perpetual reserve (solera).

By the South Seas, Torres’ Chilean Estaldo NV, 100% Pais, was a fresh clean as a whistle rosé, a lifestyle wine. More serious, still intensely pleasurable, Graham Beck’s blue chip Cap Classique 2009 Rosé ticked every box – a mouthful of strawberry loveliness. I’d rather drink this than the shown Rosé de Saignée Les Riceys from the Reims house of Henri Abelé: Riceys rosés can be spectacular, but you need to buy them from a trader who deals direct with one of the top growers in this stunning village. Burgundy beckons.

Honour was restored with two great wines – the Roederer Estate L’Ermitage 2004, Anderson Valley, spoke supreme tension and elegance fostered by a long growing season and the estate’s nearness to the cold Pacific; then, the magnificent Ca’ del Bosco Cuvée Anna Maria Clemente, also 2004, was mainly top-flight Chardonnay from the highest vineyard in Franciacorta, plus a magic touch of Pinot Bianco for perfumed finesse.

My main criticism is that there was no Prosecco Superiore, the real thing from the Trevisan hills north of Venice between Valdobbiadene and Conegliano. Surely it was a mistake not to include one of the best cuvées from a master like Ruggeri, Bisol or Nino Franco, presumably on the pedantic grounds that these are made by the Martinetti/Charmat tank method. So what? In the glass, such wines are fine, pure, delicate and can also be aged. These stand-outs, with a flick of sweetness, are also great pairings with spicy Asian cuisine, appreciated by sophisticated palates in shirtsleeve moments. The Prosecco international phenomenon is not just about giving consumers what they want at an easy price: in its classic pre-Alpine homeland , Prosecco’s soils and climate are as complex as the Marne’s; the attention to picking times and sorting the best fruit is endemic – often shaming the high volume mind set of too many Champenois.

This begged the supplementary, what is cool? Smart’s citing of annual sun days across the world was telling: from 720 for North West England ( no Cuvée Cumbria, folks!) and 840 for the Downs of Sussex and Hampshire up to the warmth of Franciacorta on1740 and the heat of Catalonia, Cava at 2200. Champagne and Central Otago were near identical on 900/920 sun hours, emboldening Smart to predict exciting sparkling prospects for this special piece of Pinot earth on South Island.

As a peep into the future, Dr Smart finished with a slow-ticking time bomb – Trunk Disease. This malady is now more widespread in the world’s vineyards than phylloxera –“spread by grapevine nurseries, mostly in denial or ignorance.” Insidious, it kills more slowly than phylloxera, especially in cool & wet regions. There is presently no known control.

In a pointer to what makes a distinguished fizz, Ed Carr, group winemaker for Accolade wines, answered Smart’s questions in a dazzling presentation of Tasmanian cuvées: his was a thoroughly convincing case that these are now probably Australia’s finest sparkling wines, fleet of foot and long-lived.

It was all encapsulated in the model Jansz Estate in the clement heart of the Pipers River on red basalt soils (like Soave Classico’s?) and the cooling influence of the Bass Strait. Add an exceptional winemaker in Nathalie Fryar, who was hooked from age 12 after meeting a friend of her father’s, who was a winemaker in Kaiser Stuhl, Barossa. Nathalie in a distinguished career since has crafted some world class wines based on classic precepts –an intimate relationship with her fruit (allowed to ripen slowly) careful use of five to 10 year oak, and long aging. Glorious successes are the late- disgorged vintage cuvée, eight years on lees, all nectarines, lemon and poached pears; and the Tasmanian Vintage Rosé, rosewater and strawberries, presaging ethereal truffles, harmonized by a seductive creaminess.

And so to the nitty gritty of potential profit, Richard Halstead of Wine Intelligence gave us a detailed intro to the world’s new sparkling wine drinkers. Despite the brake of recession, sparkling retains strong growth in most major consumption markets of the world. In many countries, it is proving a most successful recruiting sergeant for new consumers, particularly among the younger “millennial” generation in Australia, the USA and UK. Over 20% of sparkling wine drinkers now enjoy bubbles for informal at-home occasions. Women particularly think sparkling is good for socialising and enjoy its taste more than men, says Halstead. One might gently qualify this by suggesting that sparkling as a wine of welcome is liked by both sexes. Witness in hard times the success of Prosecco at even formal receptions like Christie’s. No one is complaining.

On the downside, one event notoriously fell far short of expectations for delegates, who had paid good money to attend the symposium. This was a debate about what role terroir plays in the making of sparkling wine? The motion should have included the keyword distinguished wine. Due to jokey inept chairmanship and a complete lack of intellectual rigour, the session degenerated into a seaside Punch & Judy show by the anti-terroir iconoclasts, made worse by inarticulate floundering from the pro camp who, understandably enough, were not speaking in their own language. For wines that matter, everything starts with provenance, climate, altitude and aspect – terroir by another name.

Luckily, my last attended session was a joy: Maurizio Zanella, President of the Franciacorta Consorzio talking about his grape washing machine at Ca’ del Bosco, a benchmark of high technology being the handmaid of perfectionism at this sui generis estate. When asked how Franciacorta sees international prospects, the great man replied, “well, we’ve fixed Milan, now we’re exporting to Rome.”

Italy it seems is still not one country for bella figura Italians – it’s part of their charm.