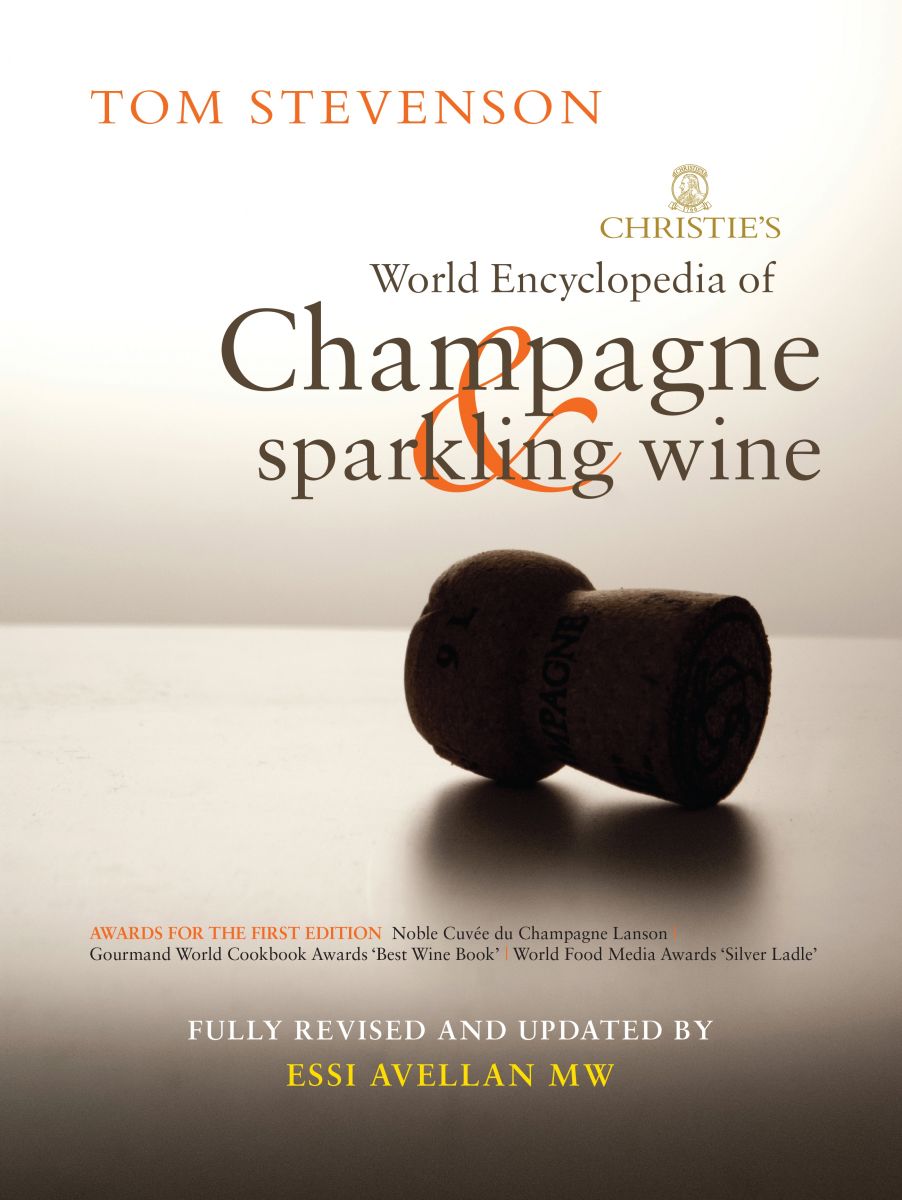 Although certainly a fully revised and updated edition of Tom Stevenson’s standard reference work on Champagne and all things effervescent, this opus is more than that- it’s very much Essi Avelan’s book. Given Tom’s Olympian blessing – “the best champagne taster I have seen” – Essi shows her prowess in comprehensive, precise and jargon-free tasting notes that are very largely up to the moment. Then, delightful surprise, you sense her authority and influence in the 50-page introduction that is an assured step-by-step guide to the traditional method, matters of terroir and the elusive quality of Champagne and beyond.

“There is no evidence …that this is an intrinsically inferior method. When produced from the finest base wines and given a long slow fermentation and extended time of lees, it could well be indistinguishable from the real thing.” This is a new and welcome voice, fair-minded, thoughtful and quite without pretension.

One thing though which did make me grind my teeth was the reheating of a mouldy old dish from previous editions – viz. that the English “invented” Champagne before the Champenois in the early 17th century. More by luck than design, yes, we were the first to use coal rather than wood to fire stronger glass in the 1620s – which later, during the Stuart Restoration, was the prototype for bottles robust enough to withstand the turmoil of the sealed second bubble-making fermentation. It was then. of course, all hit-and-miss: in truth, the development of the champagne method was an evolutionary, not a revolutionary, process that took place over 200 years. Talk of ‘invention’ is an abuse of language, not the stuff of serious scholarship.

The profiles and tasting notes which cover an encyclopedic range of sparkling wines from 40 countries begin naturally with Champagne, the largest section. Here the author has been greatly aided by her colleague, Amanda Regan, an Australian and fluent French speaker who spends much of the year in Paris, when she is not tasting in Champagne and Burgundy. One is keely aware that in this edition the gate has been thrown wide open to God’s own acre, the world of the independent vigneron(ne), giving a whole new dimension to Champagne in its diversity and variety.

Yet the great houses are given equally thorough and sympathetic treatment. There is no attempt to drive a wedge between the négoce and the vignoble: in the complex interrelationship of the Champenois partnership, the best producers in both camps share the same values, whatever the malcontents may say.

Delving into the detail, I find myself nodding in admiring approval at the author’s scrupulous fairness towards champagnes that may not be among her palate preferences but which deserve proper appraisal. The Argonne oaked wines in the range of Claude Giraud come to mind, though I wonder when she last tasted here. Giraud’s famous Fût de Chêne, in response to customer demand, is now a multi- vintage and better balanced and less woody as a result.

Always professionally even handed, the author nonetheless has her likes and dislikes, thank goodness- her writing coming alive with her favourites. Her analysis of the elegant and pure-fruited style of Taittinger is a masterpiece, as much on the quality of the straight vintages as about the fabled Comtes de Champagne itself – the supreme aperitif style.

From Rheims’ mansions to village cellars on the Montagne, her profiles of growers Arnaud Margaine for distinctive Chardonnay and Raphael Bérèche for singing Pinot Noir and Meunier are as good as it gets. In Le Mesnil on the Cote, Essi rightly recognises the two great growers in Pierre Peters and Christophe Constant (Vergnon), who make better wine, more regularly, at gentler prices than the cult wine that is Salon – so variable, the ’99 is a disappointment, the ’83 still glorious.

One slip-up in the book’s coverage of Le Mesnil is to include the once very great grower Alain Robert who sold his vineyards some years ago and is now fully retired.

These are minor grumbles. For in the sweep of producers so sensitively profiled worldwide, it’s clear that great sparkling wines are being made on at least four continents. They taste different from Champagne because their soils, climate and winemaking approach set them apart from the real thing and from each other – as much in the Cape, Tasmania, Anderson Valley, Franciacorta and the little apple in everyone’s eye – Trento Doc. Pretenders to the throne do keep the Champenois on their toes.

This book will have a prime place on my bookshelf. One never stops learning about the most intricate and manipulated wine in the world.