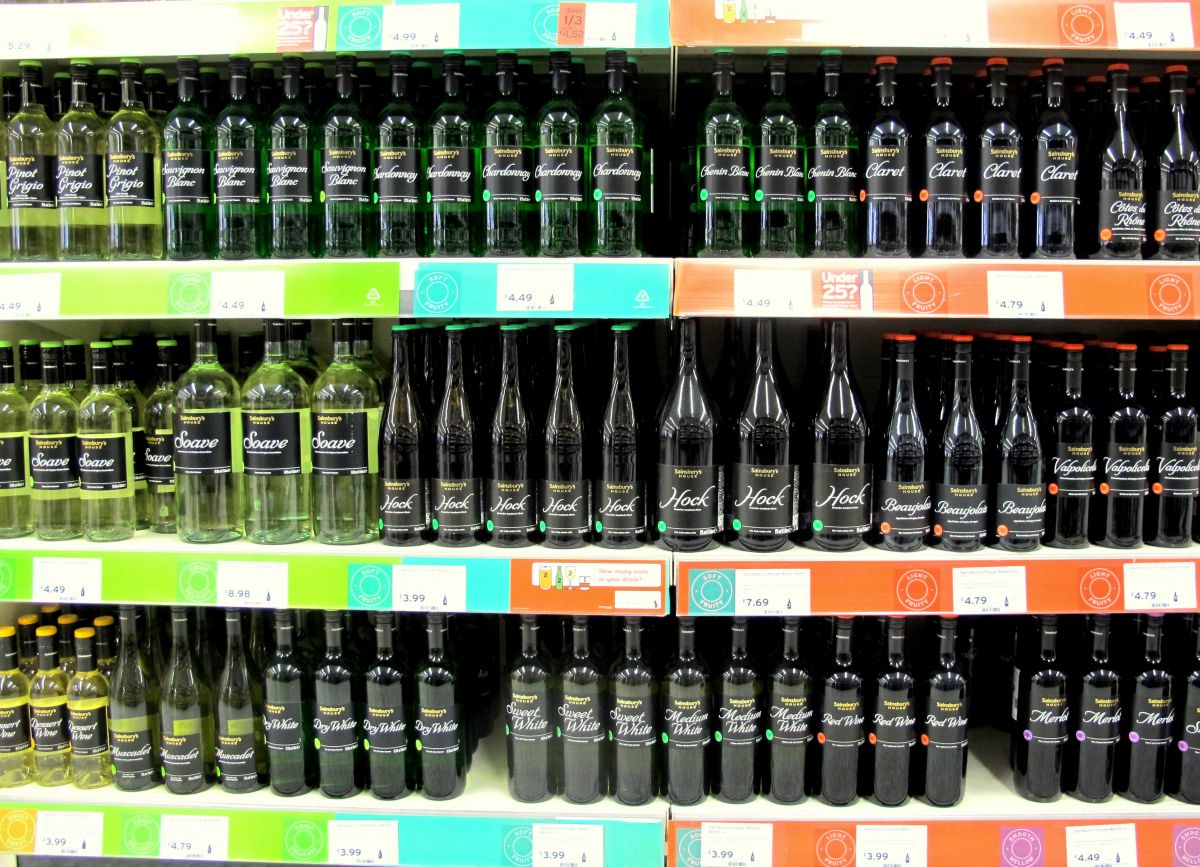 Lined up against the wall in my hallway, they stood quietly like forlorn commuters queuing for a bus. These were not bottles to make a taster salivate. Why didn’t I suggest a tasting of vintage Champagnes instead, I wondered? But this is the sharp end of the market: a collection of 92 supermarket value wines that represents much of what we actually drink here in the UK. There was no turning back. I approached the tasting with an open mind, and began the business of mass unscrewing.

According to Accolade Wines’ Wine Nation Report 2012, 81% of wine bought for home consumption in the UK comes from supermarkets. The average retail price of a bottle of wine stands at £5.06. Tesco, the UK’s largest supermarket, alone sells on average 5 million bottles of wine every week. Supermarket own-label wines are making up an increasing proportion of sales. But they rarely proactively show all these wines, that they sell in huge volumes, to journalists.

I gathered them together from four UK supermarkets: Tesco, Sainsbury’s, Asda and relative UK newcomer Aldi. All but three of the wines were priced from £3.89 to £5.99 – around a pound either side of the UK average. For Sainsbury’s and Tesco, this was the bottom tier of their own-label ranges (House and Simply respectively), and corresponding slices of Asda Wine Selection and Aldi’s own-label selections. Most were still whites and reds, but it also included seven rosés and three sparkling wines.

Since the wines I tasted are at the cheapest end of what is possible to produce, I was expecting some mediocre wines. Mediocre quality is acceptable if it is still fair value for money. Dreadful wine is not. I found both. I also found some gems.

What can you expect from a wine priced at £3.99? Well £2.56 is tax, so just £1.43 worth of wine for a start: and this needs to include all the packaging, shipping, handling, storage and delivery. So you can’t really expect mind-bending rapture in a glass. As with all consumer goods, you get what you pay for. But it’s reasonable to expect the following quality criteria at a minimum:

• The wine is free from serious technical faults.

• It tastes like what it claims to be (grape variety and region/country).

• It is enjoyable to drink.

Mediocre and poor quality exists as with any food and drink product. Quality-minded small wine shop chains have a tough time sourcing wine that is less than £6.00 a bottle that they are proud to put on their shelves. The cheapest wine at Oddbins is £5.50; Tanners, £5.75; Lea & Sandeman, £5.95; Corks Out, £6.50.

Unsurprisingly, with own-label wines price remains a strong indicator of quality – a pound at this level makes a huge difference to what you can source as a supermarket buyer. But there is a far from direct correlation: the cheapest wine was not the worst and the most expensive wine was not the best.

I judged each wine for value for money as well as quality, and found that on average the wines were just shy of fair value. Though over a quarter (27 wines) were good value or very good value, 40 wines were either not great or poor value.

The reds, on the whole, fared better than the whites. The rosés fared worst of all; two of the dry rosés were just about OK, but all of the sweeter styles were very bad indeed. The Sainsbury’s House Zinfandel Rosé NV is a strange drink. I like strawberry ice lollies as much as the next man, but I wouldn’t like drinking melted ones mixed with cheap vodka for enjoyment. Of the sparkling wines I tasted, only one was good quality – Tesco Simply Prosecco NV.

Other styles to avoid are Bordeaux and Pinot Grigio, all of which showed really badly (with the exception of Aldi Bordeaux Supérieur 2011). And if a wine doesn’t state either a grape variety or a region on the label, walk away and don’t look back. Chenin Blancs tended to disappoint especially at the cheaper end; and all wines from the USA were uniformly awful. All of these styles of wines can be excellent: just not the ones I tasted here.

If you’re looking for safe bets, some styles were more reliable. Both Australian wines and Spanish wines were often some of the top performers. A pleasant surprise was the Chiantis on offer: it can be pretty thin, mean and tannic in the wrong hands, but all three were of an acceptable or good quality and fair to good value.

So out of the four supermarkets, who were the most impressive? Wines were marked out of 100 for quality, and out of 5 for value. Wines were tasted ‘supplier blind’ and with the packaging covered up.

Aldi (average price £4.92; average quality 84.1, average value 3.8) were the outright winners in terms of both quality and value, despite not being the most expensive. Only one of their wines was unacceptable in terms of the quality criteria above, fewer than any other supplier. They had the highest proportion of wines scoring 85 points or above. This result is all the more surprising since they are the smallest of the four, and positioned as a discount supermarket.

Asda (£4.97, 82.1, 3.0) put in a solid performance. All their wines were taken from the £3.98 to £5.98 segment of their Wine Selection own-label range. The wines were fairly priced and well presented. Three of their wines didn’t make the grade, but none were extremely bad.

Tesco (£4.95, 81.4, 2.5) supplied their Simply range. In terms of quality and value, they weren’t quite up to the standard of Aldi or Asda, but not far off. Six from the range weren’t up to scratch; three of these were very bad (two from California, one Portuguese rosé) but none of them were inexcusably awful. A quarter of their wines scored 85 or above, a hit rate only bettered by Aldi.

Sainsbury’s (£4.38, 79.7, 2.3) fared the least well, though it’s important to point out that the House range that they put forward are priced considerably lower than the other three supermarkets. These wines are priced at £4.38 on average, compared to the other suppliers whose wines were priced closer to £4.95 on average. So unsurprisingly the quality tended to be lower; so was the value amongst these cheaper wines. All their wines were priced between £3.99 and £4.99. But only two of these scored 85 or above, whereas Tesco had five wines that scored 85 or above at £4.99 or less per bottle. So upper limit of price isn’t the only factor in play here. And four from the Sainsbury’s House range were shockingly bad.

(Morrisons were also keen to take part but they are part-way through a revision of their entire own-label range, to be unveiled this autumn.)

It’s not uncommon in the wine trade press to read references to ‘the consumer’; how they need ‘educating’ about wine. But looking at the numbers, I’d say the average drinker seems to know what he or she is doing. Amongst what I tasted, quality is pretty shaky until you hit £4.98, at which point quality becomes much more reliable. Spending the current average of £5.06 per bottle in the supermarkets might not guarantee you something brilliant; but it greatly increases your chances of avoiding the worst offenders.

A reasonably good bottle is satisfactory for many people that aren’t that into wine; a bit like me with coffee, I know a reasonably good one when I taste it, and that’s OK for me. I don’t care enough about it to spend a fortune on the best. I probably wouldn’t notice if it was incredible quality. But I would notice if it was rubbish. There are still some bad wines to be found amongst supermarket own-label ranges; but there are some gems to be plucked out too. Below are some of the best – and the worst.

Five best whites (details on region and producer where available)

2011 Aldi Exquisite Collection Gavi (12%, £4.99)
Lemon pith and almond with a (slightly overdone) layer of spicy oak on top. Smooth mouthfeel, good intensity of flavour with a slightly creamy yet dry and crisp finish. This is an enjoyable wine, and identifiably Gavi. 87 points, very good value.

2012 Asda Wine Selection Margaret River Semillon Sauvignon Blanc (13%, £5.98)
Spicy nectarine nose with a bit of spice. Full-bodied, but with juicy fruit and enough acidity to keep it standing up. Reasonable length of fruit and quite clean. 86 points, good value.

NV Sainsbury’s House Hock (9%, £3.99)
Not much on the nose apart from something confected, like a whiff of penny sweets. And the faint smell of watered-down bitters – fennel and aniseed. Medium sweet, with no fruit to speak off, though it is essentially balanced. Dilute and short. The ghost of a wine, that was unhappy in life. 68 points, poor value.

NV Sainsbury’s House Sweet White (Tierra de Castilla, 10.5%, £3.99)
The sweet sickly smell of an ill man holding overripe peaches in a kidney ward. But not without some passable peach and apricot flavour. Nearly makes amends on the finish, with enough acidity to throw it out the door. 70 points, poor value.

NV Tesco Simply Californian Chardonnay (13%, £4.79)
It smells of tinned peaches. It has the texture of their syrup. It finished with a cruel acidity like licking the sharpened tin. And at £4.79 it’s hardly even that cheap. 71 points, poor value.

NV Sainsbury’s House Red Wine (France, 12%, £3.99)
The faint aroma of spicy red fruit given off still manages to be aggressive. Mean and short, with little on the finish but acid and scratchy tannin. Moody. 74 points, poor value.

NV Tesco Simply Zinfandel (13%, £4.79)
Ever have those strawberry ‘shoe lace’ sweets as a child? That’s what it smells like. Off dry, with confected strawberry fruit, then some naked acidity suddenly jumps up and streaks through the finish. This is silly. 75 points, poor value.

2011 Asda Wine Selection French Syrah (Pays d’Oc, 13%, £4.48)
The Syrah tries to assert a bit of its smoky character, but it gets barged out of the way by unwelcome bananas. Some juicy, quite concentrated red and black fruits, but it doesn’t come together as a whole, and tastes disjointed. A delinquent phase? 80 points, not great value.