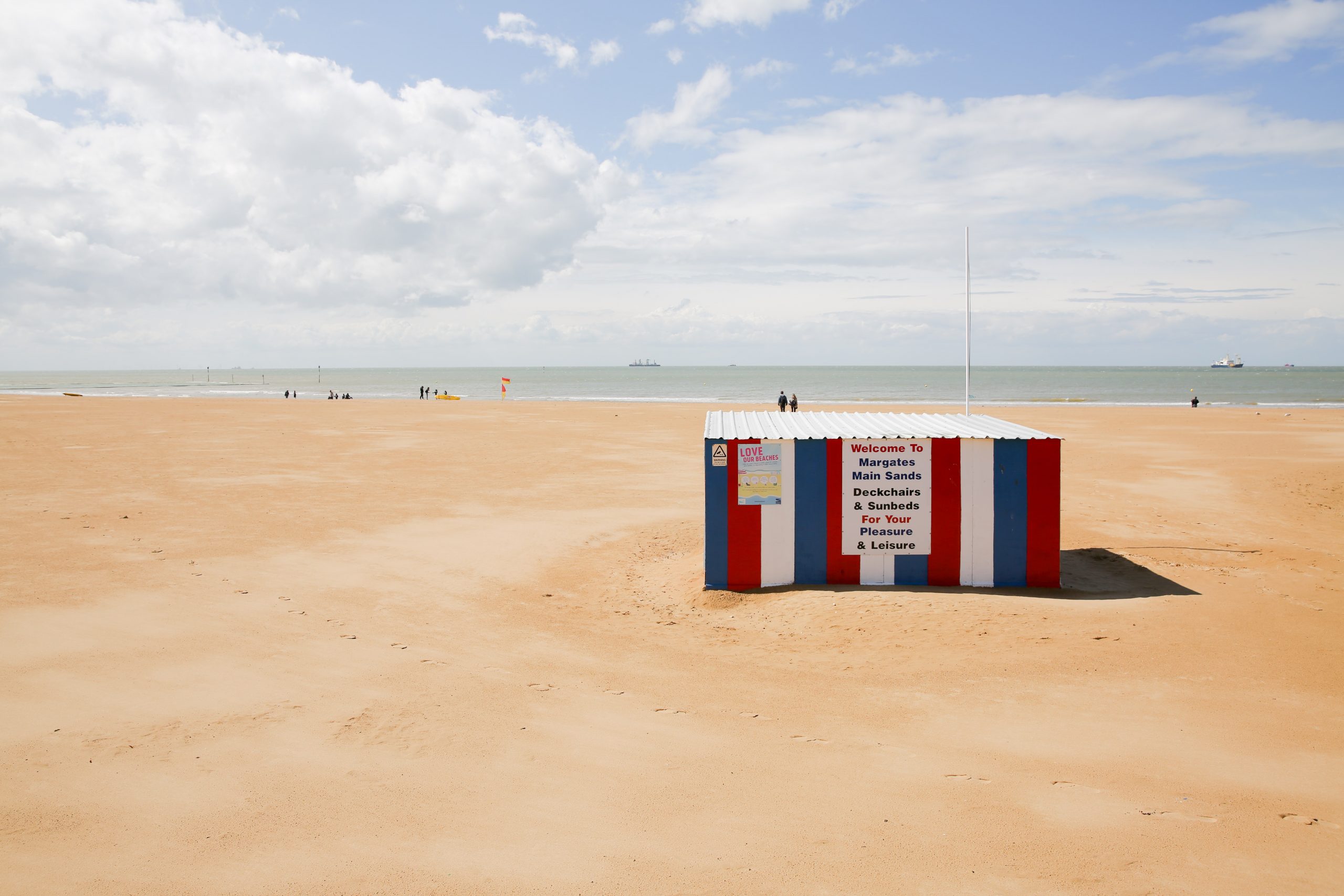 The closer we get to the Turner Contemporary, the smaller it seems. From across the bay its modernist, factory-like form stands like a monument to industriousness next to Margate’s grungy-chic idling (Italy has a heel, but Kent’s Easternmost outpost is England’s toenail, complete with all the fluff and scuzz and bloom). As we walk towards the gallery, it slowly shrinks into a row of plasticky-looking sheds. Once inside, we wonder where it all is. There are just a few rooms of installations and miniatures, heavily themed – climate change, race, history, violence. Statement art.

The work is good, the messages land – but we leave a little undernourished. I find a book of essays by the American writer Susan Sontag in a small bookshop. The secret with dense, intellectual books about which one knows very little is to pick them up decisively, placing them upon the counter with an assured smile that says just what I was looking for. Leafing cautiously is a sure way to invite the PhD student sitting behind the till to dismantle this self-delusionary moment with a deft question – do you need any help…?

It turns out to be the perfect book for the day. “A work of art encountered as a work of art is an experience, not a statement or an answer to a question”, she writes. “Art is not only about something; it is something”. I read one of her best-known pieces: Notes On Camp. This is a word whose primary meaning has shifted over time, moon and planet having traded places such that its modern usage is un-untangleable from what were previously only orbital notions of sexuality. The original aesthetic, Sontag maintains, can be found in mannerist painting, the Art Nouveau, 19th century opera; places where the separation of content and style is essential, where the world is seen “not in terms of beauty, but in terms of the degree of artifice, of stylization”. Margate, which invites you to spend your winnings from the Dumbo slot machines in the Nordic homewares boutique next door, seems to fit the bill.

That evening we eat in a confidently-hip fish restaurant, the North Sea breeze carrying wisps of karaoke and decomposing seaweed through the narrow streets on the western side of the harbour. The cooking is serious, fine, full of relish. I look at the wines by the glass and order something that I am almost certain will not be very nice. It arrives, slightly pissy, all rapeseed and Muscat, sagging with fruit both genetically and climatically disadvantaged. My wife, a practised and merciless tormentor, is laughing. I find myself not minding too much – in fact I am almost enjoying the experience. I know the wine. I know the producer. I know the label. I have a certain affection towards the style – or what Sontag would call stylism – that is being referenced. “In naïve, or pure, Camp, the essential element is seriousness, a seriousness that fails”.

The wine is not natural by any widely-held definition, but it is naturalistic (a word I find myself using more and more) – it makes a statement about its intention, visual and verbal, the force of which outweighs the presence of the wine itself. There is a herd mentality at play when terms such as respectful, regenerative, and minimal-intervention become ubiquitous, all passwords into a huddle originally formed by worthier beasts. I find myself wondering what I would have made of the same wine had it been totally unknown to me, poured from a drab, generic bottle? Would it have been sent back?

Last summer a friend brought a magnum of a very buzzy, du moment Pét Nat to a party. The crown cap was eased off in silence. There were no bubbles. It was quite badly oxidised. I found this very funny. There seemed to be no question of going back to the shop for a refund, though – the relationship between certain wine retailers in London and their devoted customers appears to resemble that of street dealers and theirs – so the bottle just sat there, periodically re-tested much as a hapless baker returns to a sunken cake. The label was very beautiful, though.

If the ostentatiously naturalistic promises to whisk us away from all the grubby, cynical meddling of human hands, then there is some irony in the fact that such wines often taste the most of people – of unpredictability, of humour, failure and serendipity. After enough laps of the track, the hunt for new wines breeds a certain wariness of any such promises, though, whether of pastoral bliss, or importance, or luxuriation. Instead, those bottles whose labels are formed of simple print on good, plain paper start to hold an irresistible appeal. Those whose back labels say hardly anything at all. This book has no foreword – just an afterword. Consume, then reason.

As you leave the Turner and walk back around the bay past the graffiti that takes a swaggering shot at ironically-bad taste (and misses), the gallery slowly expands. By the time you reach the juddering concrete fascia of the Dreamland arcade, looming over the beach like a geriatric Death Star, it is almost back at its original size. There’s a café next door where you can sit drinking a local pale ale, listening to the roars of souped-up hatchbacks tackling pointless roundabouts. The sunset is magisterial. And you can dream, again, of a place where things are not only about something, but are something.

Photo by Max Letek and Unsplash