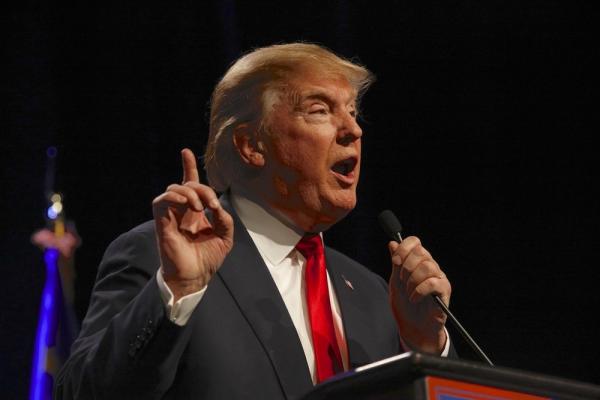 What is it with you people that you want to know what I think about wine all the time? When I became the new Emperor of Wine, and, really, I’m doing a fantastic job, just fantastic, I didn’t know I’d have to spend all my time educating all of you on wine. I have people for that. Great people, the best people. I only work with the greatest people. I mean, look at Mike Pence, my Vice President. Nobody had heard of him before I hornswaggled him to run with me, and, I guarantee this, folks, no one will ever hear from him again.

OK, so I’m going to tell you a little bit about a lot of different places where wines are made. Did you know that every country in the world makes wine? Yes. That’s right. Every country in the world makes wine. That’s amazing. That’s fantastic. Except Mexico, which is ironic because Mexicans pick most of the wine grapes in the world. Mexicans pick 98% of all the grapes in the world. 98%! The other 2% are picked by machine. That’s crazy, folks. And the Mexicans release more gas into the atmosphere than the machines! There’s your climate change. That’s what’s warming the planet. The Mexicans are crossing all our borders and warming the planet with their bean farts. I’m telling you, people, there’s a war coming. A jumping jihad, a Latin frijole war. The first thing we have to do is make sure that from now on all wine is mechanically harvested and climate change is over. Completely done, like Ted Cruz and Bernie Sanders, who are both Mexican, I’m pretty sure.

Wine? OK. Let’s talk about wines from different parts of the world.

There are too many different grapes in Italy. Too many. You don’t need that many different grapes. Why do you need 1,400 different grapes? That’s crazy. They just do it to make it hard to understand their wines. That’s just how Italians are. I mean, they talk with their hands. Who talks with their hands? What are they, ventriloquists? That’s crazy. You don’t need to know anything about Italian wines except this — not even Italians drink them. Not even Italians drink them. Not even the DOCs. Which I don’t know what that means, DOC. What is DOC? Another Italian cover up. Next time I’m in Italy, and my wife will tell you I’ve got Roman hands, I’m just going to ask them. I’m just going to ask, “Wop’s up, DOC?”

I know what you’re thinking. Why would I drink South African wine? Wines made by Africans? Let me tell you, it turns out that most of the people who make wine there are white people. Yes! There are white people in Africa! White Africans. A lot of people don’t know this. What’s amazing is that when they brought slaves to the United States from Africa, they didn’t bring any white ones! That’s just prejudice, folks. Only the lucky black ones got to come to America. So there are still a lot of white Africans in South Africa making wine. So that sure worked out for the South African wine business. The white Africans got left behind to make the wines. Could have been a catastrophe if they’d brought the white ones to America.

How are the wines? Pretty good. Pretty good. They have some confusing names for their grapes, though, that you’ll have to get used to. They call Syrah “Shiraz” down there. Nobody knows why. Some kind of ghetto thing, I guess. And they call Merlot, “Merlaz,” and Cabernet Sauvignon they call, “Cabernaz.” Basically, it’s like the grapes have rap names in South Africa. Fershizzle.

And a lot of people think this is a myth, but, no, I can tell you for a fact it’s true. The South Africans have Yuge Pinotages. I’ve put a lot of them in my mouth, and I can tell you. YUGE!

People talk about Riesling like it’s great. It’s not great. It’s not great. And that’s all they make in Germany. Riesling! Come on, Germany, make some real wine. Nobody buys Riesling. You can make all the Riesling you want, but if nobody buys it, what do you have? You have Yahoo stock, that’s what you have. Riesling is like Yahoo. Everyone’s heard of it, a few people have tried it, but everybody just moves on. Don’t get me wrong. I love the Germans. If it weren’t for the Germans, we’d never have won World War II, and that saved the world. So the fact that they make lousy, boring Riesling is just too bad. If I ran Germany instead of that crazy woman who’s running it now, that Angela Merkin, or whatever her name is, I’d tear out all the Riesling vines. And you know what I’d plant instead? Spätlese. Now that’s good wine.

California is the worst state in the country for wine. The absolute worst. You know what they make great in California? Homosexuals. The LGBTIQED community. Whatever. Wine? There isn’t one place in California that makes great wine. Not one. Napa Valley used to be great. Really. There used to be great wines in Napa Valley. Really great Cabernaz. Now it’s mostly caves. That’s all they talk about. Caves! Napa Valley is just a bunch of guys and their caves. It’s like “The Flintstones” of wine. They’re just cartoons of wine.

And the rest of the state is even worse. Sonoma? The only place in Sonoma that makes great wines is the Russian River, which was named for people from Russia. Look it up. It’s true. People from Russia are called Russians. The only place in California that makes great wine is named after Russians. It’s not the French River, or the Spanish River, or the Crimea River. Oh, I cried a River over you. It’s the Russian River. If it were up to me, and it probably will be soon, I’d turn over the entire wine world to those Russians’ River. Fershizzle.