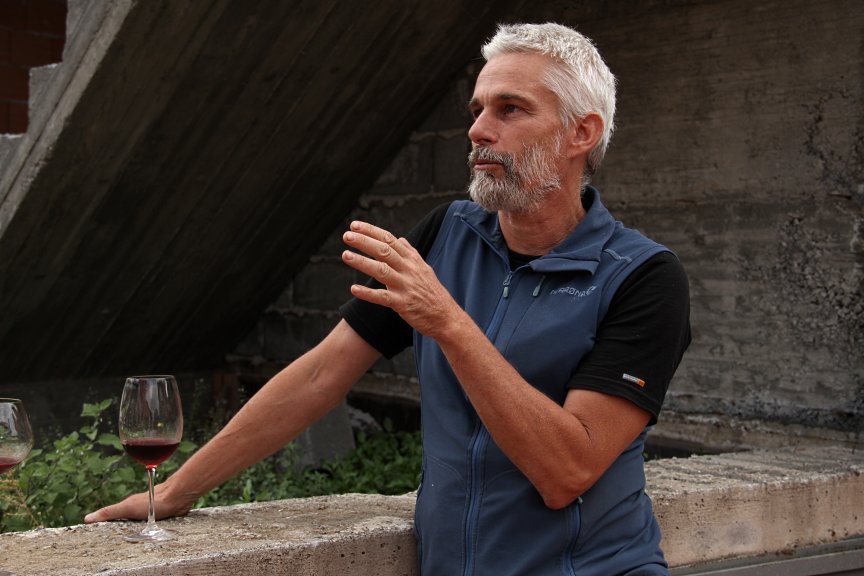 Mount Etna’s most controversial winemaker, Frank Cornelissen, is a hard man to track down.

After a first failed meet up (my tardiness partially to blame) and a number of vague follow up phone calls, a second rendezvous also starts to go pearshaped. His registered address appears to be fictitious. More phone calls follow, and we both finally pull up outside Solicchiata’s wonderful pizza and natural wine bar Cave Ox. I introduce myself to a white haired Belgian who looks weary, if not decidedly apprehensive at having a precious afternoon wasted by a journalist. Perfectly understandable as we’re right in the middle of harvest.

We drive to a half-built concrete structure, the basement of which turns out to be the winery. It becomes clear that Frank has no intention of wasting the time. He applies himself energetically to pigeage of a large plastic open-top fermenter, throwing down a mix of scientific and philosophical gauntlets as he goes.

Cornelissen doesn’t come from a winemaking background, and is essentially self-taught. Originally an importer with a penchant for fine wines from Bordeaux and Burgundy, he became convinced that wine could be made in a less manipulated, less industrial way. A trip to Georgia in the 1990s was pivotal: “Georgia really touched my soul – I visited before there was really any tourist infrastructure. I remember drinking wine straight from a qvevri and it was magical”. He began the search for the right location to put his ideas into practice. Why Etna? “Because I ruled out everywhere else” comes the deadpan answer. 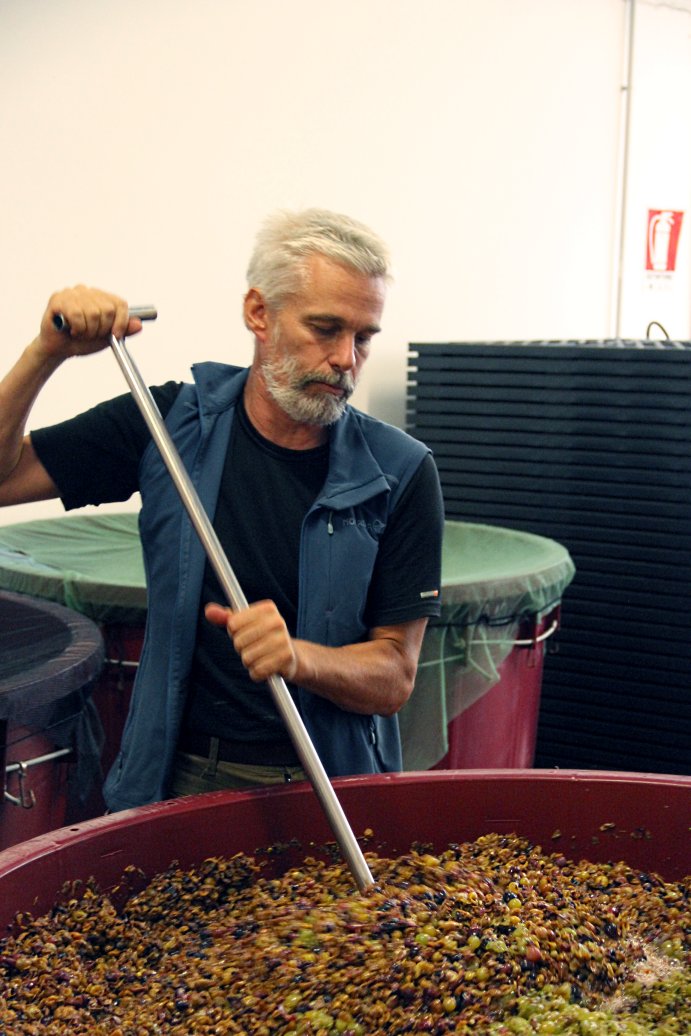 Whilst believing passionately in Etna’s extraordinary volcanic terroir, Cornelissen does not follow traditions slavishly. I ask why he doesn’t grow any Carricante – generally accepted as the region’s highest quality white variety. “If I want acidity, I’ll suck on a lemon,” he says. Views on ageing wine in oak are similarly disparaging: “I love forests – I prefer to leave the wood where it belongs”. And on grafting: “Going ungrafted is worth the risk here – the quality’s higher, and I notice a lower pH (generally more acidity) in our ungrafted vines”.

Cornelissen arrived in 2000, when most Etna producers had given up tending their vineyards and there were barely 10 serious estates left in the region. 13 years later, there’s been a sea-change – Etna is one of Italy’s most up and coming regions. Frank believes there’s still a way to go: “Give us a generation to put this place back on the map – the contradas (single vineyard sites) are key, and we need to understand them much better”.

If there’s one thing that defines Cornelissen’s style above all else, it’s his insistence on vinifying and bottling wines with absolutely no added sulphur dioxide ( SO2). Even in the context of the “natural wine” boom, this is an extreme position. SO2 is considered so vital to avoid premature oxidation and ensure stability, that most winemakers routinely add at least a few grams at bottling. To the vast majority of producers, eschewing sulphur is madness.

Stories abound about unstable, or oxidised wines – Robert Joseph famously likened the experience of uncorking a youthful Cornelissen to “watching a child die”. There are even rumours of exploding bottles.

By his own admission, Frank has made mistakes over the years. I’ve tasted some: white wines that were unattractively oxidative, and the 2005/06 Munjabel – a wine with all the charm of a rustic “Vin de Table”, but a £30 price point. The bottle I tried in 2013 had clearly refermented, lending an unexpected if not unpleasant pétillance.

What is the response to critics who insist that good, stable wines can’t be made without SO2? “The problem is that we’ve lost the knowledge and the skills to make wine in this way. We have to relearn them, which is what I’ve been doing over the last decade”.

Cornelissen seems hellbent on learning his craft the hard way, through trial, error and – some would say – sheer bloody-mindedness. “When I first started, I didn’t even know when to bottle the wines”, he concedes. “I gave my friend Emmanuel Houillon in Jura a call and admitted that I had all this wine sitting here in tanks but no idea what comes next. Really I was just a gardener for the first few years.”

Making mistakes is acceptable if you learn from them. And Cornelissen has certainly done that. He seems almost restless in his desire continually to improve and refine production methods. Stainless steel vats are a no-no – “They encourage reduction. Titanium would be ideal if I could afford it.” Even the beloved amphorae (Spanish and epoxy-lined, after earlier experiments with unlined amphorae proved unsatisfactory) are due to be scrapped in favour of larger and more neutral concrete eggs.

The blending across vintages for the mid-priced Munjabel is also being abandoned – from 2012 Munjabel will be produced from a single vintage. “It’s too risky to blend if I’m using no sulphur – I noticed that volatile acidity levels sometimes increased when I did so”. 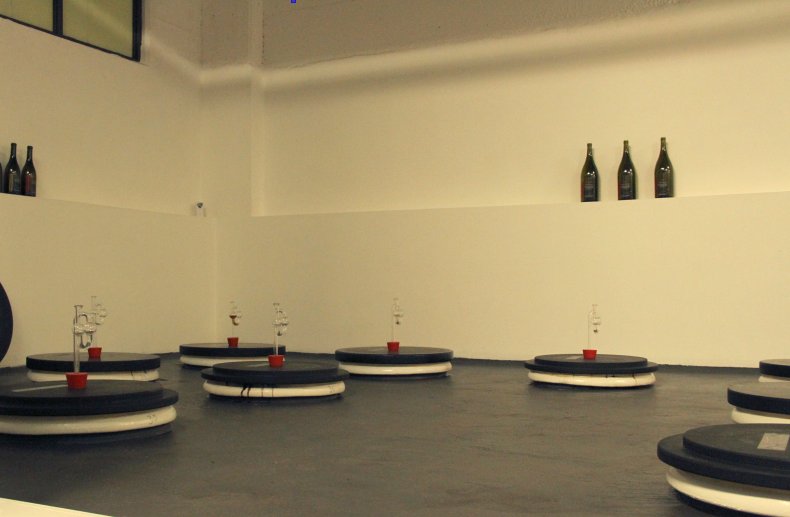 Cornelissen’s approach is increasingly precise. The winery is spotlessly clean, and replete with technology to monitor and stabilise the environment. Not happy being merely organically certified, Frank has now embarked on various ISO certification programmes to further substantiate his drive for quality and hygiene.

This precision is evident in recent vintages. We taste some monolithic 2012 reds (Munjabel and Monte Colla), which are impressively dense, if young and slightly unresolved. I ask if we can compare and contrast with 2011, a more classic vintage producing lighter wines. Frank disappears into a storeroom for a few minutes, returning with a bottle of the top cuvée, “Magma”.

I eye the bottle with concern, wondering if I’ll witness my own Robert Joseph moment. Frank has other ideas: “Let’s go outside and get away from these flies” (fruit flies are an unavoidable hazard in wineries at this time of year).

We decamp to sit on a rough stone wall overlooking the partially built new winery, and spend two hours savouring the rest of the bottle al fresco. It’s utterly delicious -and stable – down to the last sip. By the end, I’m absolutely sure that Cornelissen not only has the potential to make exceptional wines that reflect Etna’s terroir – he is already doing it.

I have a final question. What is Frank’s stance on the almost equally controversial natural wine category? “I don’t make natural wine, I just make wine with nothing added”. 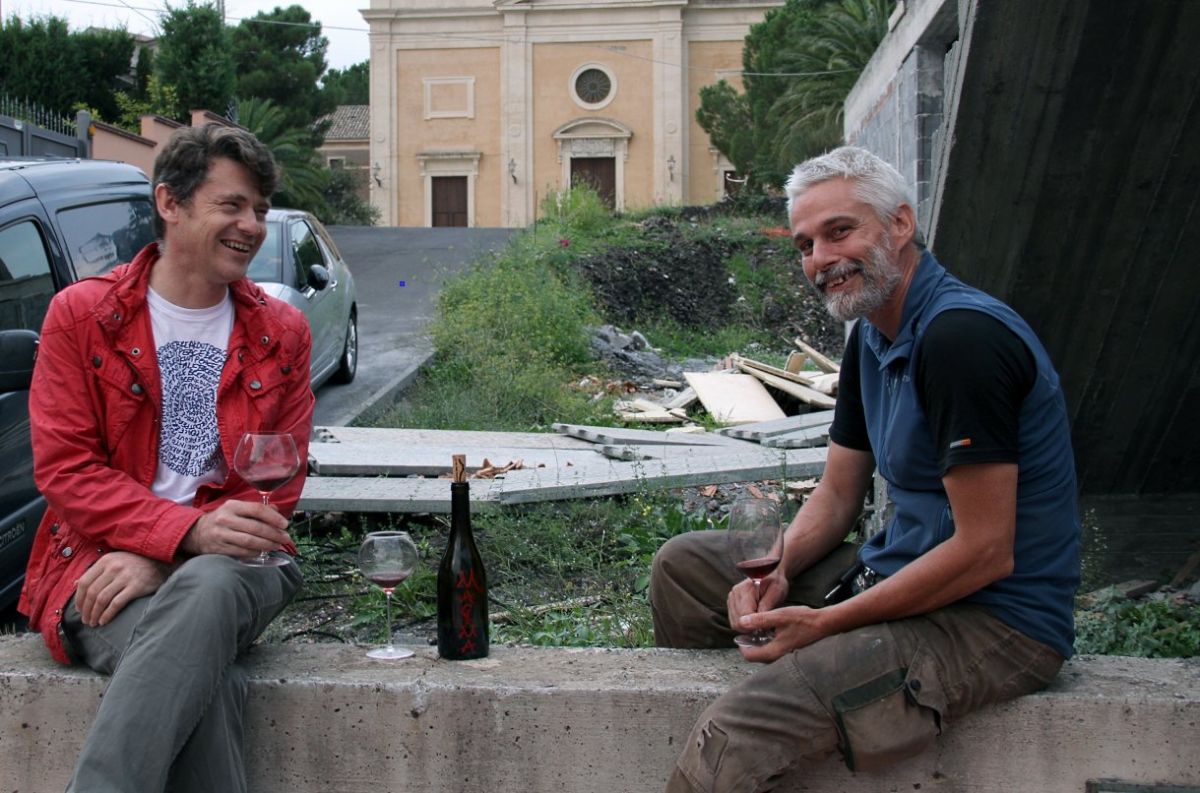 Frank Cornelissen’s wines are available in the UK from Raeburn Fine Wines.