To understand how, in 2014, one man with a grudge managed to bring down some of the highest and mightiest in Bordeaux, you have to know a little about the background. The man in question was a Russian oligarch called Mischa Vious, the 187th wealthiest man in the world, according to a 2013 report in The Sunday Times.

Traditionally a vodka drinker, Vious had been introduced to wine by his third wife, an aspiring young flautist called Ella Fantine whose parents owned a pretty little Pauillac estate close to the village of St Laurent between Châteaux Mouton and Lafite-Rothschild. Château Oublié had belonged to the Fantines for generations, but its grapes had, until the1970s, been delivered to the Pauillac cooperative to be crushed and sold under the co-op’s La Rose Pauillac label. When Serge Fantine, Ella’s father, inherited the vines, he resigned from the cooperative and joined the association of Crus Artisans which was made up of estates that took pride in being humbler than the Crus Bourgeois.

Well-informed local professionals were well aware of the quality of the 2.5ha of Oublié terroir, and especially of the fact that its vines sat close to the hamlet of Milon on a small moutte – or hill – of the kind from which Mouton Rothschild had taken its name. The Fantines were not great winemakers and they could not afford high quality equipment, but their land was special enough and the price sufficiently modest for those in the know to buy the wine almost every vintage.

When Monsieur and Madame Fantine died after their insufficiently protected ski-lift was hit by lightning, their only daughter and her wealthy Russian husband had to decide whether to sell the estate or invest in it. The first option was made very appealing by the number of approaches they received from owners of neighbouring châteaux. It was said that their prime slice of old Cabernet Sauvignon and Merlot in Pauillac could usefully be swallowed into the Lafite or Mouton estates.

Unlike Burgundy whose grands crus can only come from vineyards that have been recognised as grands crus, Bordeaux classifications are based on brands. A second-growth château could legally sell all of its vineyards and replace them with cru bourgeois vines without losing its second-growth status. And Cru Artisan vines could legally be transformed into first growth vines as soon they are bought by a first growth château.

Top experts were flown in and millions spent on improving the drainage, replacing ailing and dead vines and creating a state-of-the-art winery, complete with the latest concrete eggs and barrels. By the time the 2009, the first vintage, was released, Château Oublié was acknowledged by the select number of critics who had visited the estate to be one of the most painstakingly produced wines in the world. The 2009 went almost unnoticed when it was released, but when it was included in a major blind tasting in 2013, it came third only to Margaux and Lynch Bages. The 2011 was one of Robert Parker’s few 100 point wines.

Despite the evident quality of its wine – selling for 50% more than any Cru Bourgeois, and more than many crus classés – Château Oublié’s application to become a Cru Bourgeois was, however, shunned. The château apparently failed to fill several criteria, but Vious was reassured that, in time,  promotion would not be out of the question. Be patient, an official said. In another ten or twenty years… Vious felt slighted – and angry. “It is just because I am Russian man not French”, he thundered. “It is like 1855. Rothschild was only second growth because owners were Jewish.”

“In any case”, he growled, “I no longer want to be member of Cru Bourgeois or even Crus Classés. It is not clubs I need to join. My wine is too good for them…”

Meanwhile, another battle was quietly simmering in Bordeaux. The decision by François Pinault to withdraw Château Latour from the en primeur system had angered a number of prominent Bordelais. After much lobbying, in March 2014, an ultimatum was issued: Latour had to rejoin the system or it would be expelled from the Union des Grands Crus.

It was at this time that, by coincidence, Pinault and Vious happened to meet. Both had had tough childhoods; the Frenchman had been sent to a tough school in the mountains where he had been made to wear clogs and learn carpentry, while the Russian had grown up in the rigorous conditions of Siberia. Neither stood fools or unnecessary pretension easily and the conversation inevitably turned to the challenges they were both facing. After several bottles of Latour and some of Vious’s best vodka, the two men had come up with a bold plan.

The announcement was made in Le Monde. For an initial ten years (there would be a renewable lease), Château Latour would cooperate with Château Oublié to produce limited volumes of an entirely new unclassified wine called Chateau Latour Oublié whose price- despite its lack of classification – would be 15% above that of Latour. Distribution would be handled by Château Latour and the wine, like Latour, would be sold when it was ready to drink.

Château Latour was apparently totally reconciled to its expulsion from the Union des Grands Crus. Latour, wrote the Le Monde journalist, was already above classifications and Unions, in the same way that the Louvre was above other museums and Versailles above other palaces. (And, as the writer continued, Pomerol’s unclassified Pétrus was above most of the region’s classified wines.)

That writer was one of a set of carefully briefed high-profile journalists in France, the UK, US and China, all of whom penned articles posing the same question. If the new top wine of the Médoc was no longer to be a Grand Cru Classé, surely the notion of an application for UNESCO world heritage status for the 1855 classification was out of the question.

The British blogger Sam Nutkin MW wrote a widely-read piece on his website demolishing the “immutable” quality of the 1855 Classification that was so vaunted by those seeking the UNESCO recognition. Until 1952, he revealed, Château Lascombes had only 15ha of vines. Today it has over 80. What relation did the current estate have to the one that was classified in 1855? To agree to requests for heritage status for the vineyards of Burgundy and the cellars of Champagne made sense, he argued: after all, the Burgundian boundaries were established by law and after centuries of experience and the crayères of Reims were dug by the Romans 2000 years ago. In this trio, only the 1855 Classification was a comparatively recent human conceit – a list of brands – whose internal shape has shifted ever since its creation.

Perhaps inevitably, the 1855 Classification not only failed in its application, but became the subject of much negative publicity in the crucially important Chinese market. UNESCO snubbed the Bordelais even more firmly by giving the Burgundians and Champenois the recognition they sought. Mischa Vious is still owner of Château Oublié and joint director of Latour Oublié. Both wines continue to sell at their super-premium prices to people who care more about their quality and/or prestige than their status as crus classsés, bourgeois or artisans. Mr Vious is not a particularly welcome guest at many black tie Bordeaux events. 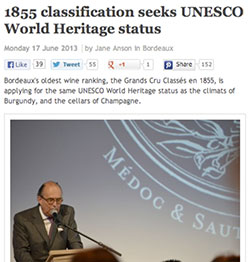 The facts behind this month’s whimsy: the 1855 classification is seeking UNESCO World Heritage status – along with the “climats” of Burgundy and the cellars of Champagne. While there is no such estate as Château Oublié, there is a Cru Artisan in Pauillac called Château Béhèré, situated next to Château Mouton-Rothschild which has under 5ha of vines and produces 33,000 bottles of wine that sells for under £15 apiece. In May 2013, the estate was sold to property magnate Jacky Lorenzetti who, according to Decanter outbid a first growth to get it.  Its grapes were previously sold to the Pauillac cooperative.

There is a respected theory that anti-semitism lay behind Mouton Rothschild originally being classed as a second growth. The recent revival of the Cru Bourgeois syndicate has been plagued with legal efforts questioning the way inclusion in its membership is decided. François Pinault’s decision to withdraw Château Latour from the en primeur system was greeted with anger by many in Bordeaux and with predictions that his move to selling his wines when they were ready to drink would fail. The first release sold out immediately, however – and at high prices.  Pétrus, like several of its unclassified neighbours in Pomerol, continue to sell for higher prices than many Médoc châteaux that were classified in 1855.