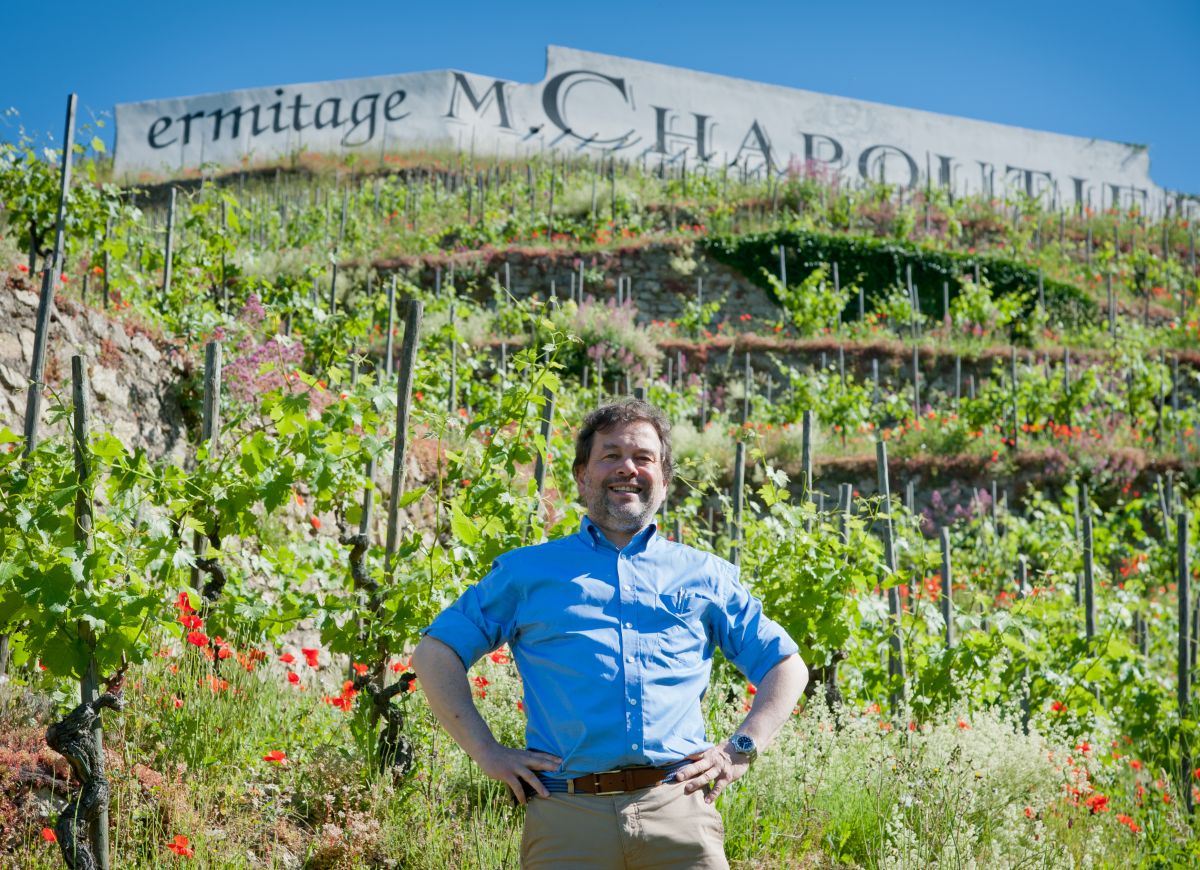 If the majority of the press surrounding the 2013 vintage in Bordeaux is to be believed, most en primeur samples should have been gathered up, put in a sack and drowned in the Gironde like so many sickly, malformed kittens. Bordeaux is always the earliest serious wine style to land on the market, and the character of its vintage often imprints itself on the minds of drinkers as speaking for the entirety of France. But a disappointing vintage in Bordeaux can be exceptional elsewhere.

It’s around this time every year that Rhône ringmaster Michel Chapoutier travels the globe presenting the new vintage of his top single vineyard wines or Sélections Parcellaires as he calls them – on this occasion it’s the 2013s. His first stop is always London. He releases his wines a good six to twelve months before most other Rhône producers, so it provides a tantalising early glimpse of what we might expect from the vintage. It would appear that ‘13 isn’t unlucky for everyone.

Chapoutier owns around a third of the hill of Hermitage, and his top wines are often amongst the most profoundly delicious to be found in the Rhône. But this year his opening gambit felt like a veiled apology. “There are some vintages that are judged very highly when they when they are young,” he said, “and some that are judged more severely. When I was in school I always remember who was first in the class and who was last. If we would have decided at this time who will be a president and who will be a tramp, we would be wrong quite a lot of the time. It’s probably the same thing for wine.”

Compared to previous vintages, this line up did indeed feel relatively gawky and immature; there was acne and awkwardness. Young, unfinished wines are never easy to taste, but this selection was going through a particularly difficult phase. Underneath the dodgy haircuts and moodiness, however, some of the wines had real potential.

The weather was infuriating in 2013. The winter was very wet. It was so cold in spring that vegetation was three to four weeks late to start. This led to coulure (when flowers fail to turn into grapes). Up to 35% of some of his plots in the north were affected, and, since Grenache is particularly susceptible, up to 80% of others in the south. This led to low yields. Chapoutier’s Châteauneufs are 100% Grenache, but since it is the major constituent in many producers’ blends, we are likely to see a good number of wines bulked out with Syrah and Mourvèdre this year, which will lead to some atypical wines.

Coulure wasn’t the last of Chapoutier’s problems. “After that, we had secondary buds… but these buds are not interesting. We were obliged to take off these second generation grapes. That was hard work.” Thankfully the weather picked up towards the end of the growing season. But the harvest was still very late, into October for some appellations, which was “what we were used to 25 years ago”. Fermentations were thankfully straightforward, and the wines are now quietly maturing in barrel.

For Chapoutier “it was a vintage with a good level of acidity, with not a high level of alcohol. In certain terms in made me think of the vintage ’91.” Looking forward to how the wines will age, he said “there is large enough structure – it reminds me of ‘83”. In other words, the tannins could be “quite hard” and would take time to soften.

In producing a new vintage, Chapoutier described himself as a parent behind a child that is learning to ride a bicycle; he doesn’t hold the child, he just helps push it off then follows along behind. 2013 is off to a shaky start, but some of the class is showing unexpectedly strong characters – at least in the Northern Rhône. I’ll be visiting the region this summer and autumn for a full report on this unusual vintage.

All tasted at The Westbury Hotel, London, 31st April 2014. They were at a particularly difficult stage in their development, so scores are given in a range. I intend to retaste later in the year when the wines have had more time to develop.

2013 Chapoutier Ermitage Blanc ‘Le Méal’
2 ha, 100% Marsanne, 50+ year old vines on alluvial deposits and large stones.
Deeper gold, with some struck match oak and celery on the nose. Michel’s note of “tomato leaf” aroma is spot on. Very full and rich, with tons of glycerol and body. Intense, and mineral. Good pure fruits on the finish and balanced acidity. Firm finish, with a touch of honey. Lacks a bit of thrust at present, but will no doubt take on bulk as it develops. Just 13.7% alcohol. 93-95 points.

2013 Chapoutier Ermitage Blanc ‘De L’Orée’
3.5 ha, 100% Marsanne, from Les Murets. 70 year old vines on pebbles and sand.
Uniform gold colour, with plenty of apricot and peach on the nose. Very full bodied, with a slow-moving opulence. Seems a little fat on the mid-palate, then its acidity, alcohol, and some classic Marsanne bitterness all come in on the finish to hold it up. Some marzipan on the long finish. 94-96 points.

2013 Chapoutier Ermitage Blanc ‘L’Ermite’
0.5 ha, 100% Marsanne, 100+ year old vines on the top of the hill of Hermitage behind the chapel on granitic soils.
Deep gold, with an assertive earthy nose. Very full bodied, very concentrated, with a firm mineral finish which holds the palate down. Keen, straight, very long. Great purity and intensity, with extraordinary length – it seems to block out your other senses when you taste it. Serious stuff. 96-98 points.

2013 Chapoutier Condrieu ‘Coteau de Chéry’
100% Viognier, old vines grown on granitic soils and mica-schists.
Lovely nose, with lifted and perfumed peach aromatics. Very full in body with just about balanced acidity. Rich, with some mineral glints on the finish. Lots of extract, and just a tiny bit of alcohol currently showing on the finish. Pure and long. 93-95 points.

2013 Chapoutier Côte-Rôtie ‘La Mordorée’
3 ha, 100% Syrah, 70 year old vines on steep terraces of mica-schist in loess on the border of the Côte Blonde.
Perfumed red fruits and liquorice. Good lift and purity of expression with some distinctly savoury black olive notes. Peppery. Nicely balanced, but tannins on the dry side. A bit clunky at the time of tasting, but time should help focus all the elements. 91-93 points.

2013 Chapoutier Ermitage ‘Les Greffieux’
3.5 ha, 100% Syrah, 50 year old vines at the foot of the hill grown on alluvial deposits, shingle and clay.
Olive, herb oils and smokiness on the nose. Savoury on the palate too, but laced with some ripe blackberry fruits. Mouth-coating, chunky, slightly grainy tannins and good acidity. Very full, intense and long. Very good, but slightly lacking in charm for now. 92-94 points.

2013 Chapoutier Ermitage ‘Le Méal’
2.2 ha, 100% Syrah, 50+ year old vines on high terraces of shingle and clay.
More intense fruitiness on the nose than the Greffieux, richer, with a vein of rosemary running through it. Full, smooth, lovely texture. Lots of blackberry and bacon fat. Long, intense, fresh and fine. 94-96 points.

2013 Chapoutier Ermitage ‘L’Ermite’
3 ha, 100% Syrah, 80+ year old vines at the top of the hill around the chapel on loess over granite.
Very closed, but all the elements are there swirling round like a whirlwind at night. Some lighter fragrance can be coaxed out along with crispy bacon and dark berry fruits. Full but not massive, but with layer upon layer of extract and a sharp, high toned spiciness. Very savoury on the palate, very long. Tannins coat the mouth, but young and raw still – a bit more time in oak will soften the edges. 96-98 points.