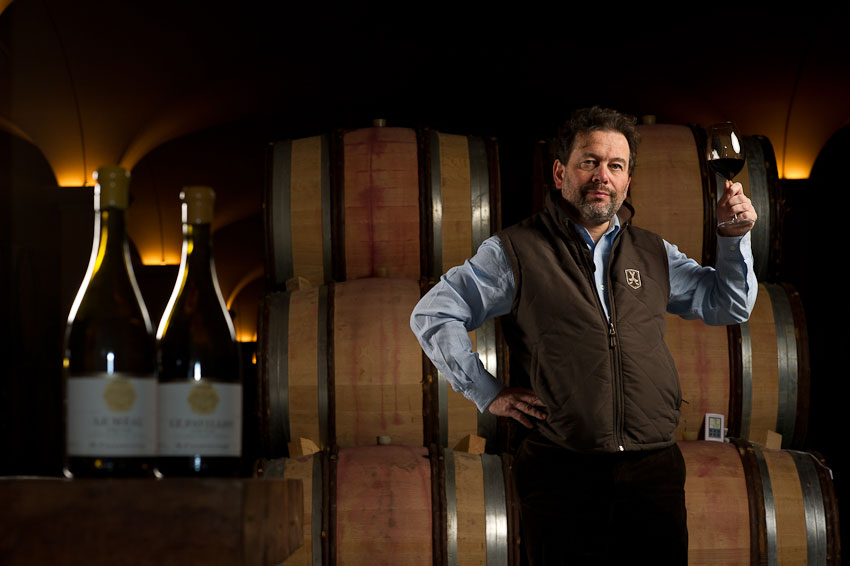 Every spring, Rhône ringleader Michel Chapoutier comes to London to unveil the new vintage of his top single vineyard wines, the Sélections Parcellaires. It’s a hotly anticipated tasting for a number of reasons. Firstly, because Chapoutier’s wines are consistently among the best in the region. Secondly, because he shows his new vintage six months in advance of most other winemakers, so it’s a tantalising glimpse of what’s to come. And thirdly, because Michel is such an entertaining, outspoken and provocative performer.

This year however, despite being an extraordinary vintage, a trim and well-groomed Michel had less to say than normal – and was even prone to the occasional understatement. In difficult vintages, there is a story to tell – challenges, battles, disasters averted. But 2015 wasn’t difficult: quite the contrary. It is, he said, “probably the best vintage since 1990.” He went on to mention a recent conversation he had with renowned Côte-Rôtie winemaker Marcel Guigal, who suggested it could be the equal of legendary vintages such as 1961 or even 1947. As the 2015 Bordeaux en primeur carousel creaks into action, you might want to save some of your wine budget for the Rhône this year.

Michel began by describing 2015 as “a warm year”, a slight understatement that could do with elaborating. After a humid spring, mid-June to mid-August was sweltering, with temperatures regularly topping 37°C (99°F). Regional marketing body InterRhone describes 2015 as “one of the hottest seasons of the last few decades.” It was also unusually dry.

Thanks to ample rain during the previous winter and spring however, according to InterRhone there were no reported symptoms of drought. There were some thundery storms during the harvest in late August and September, but, they say, these caused no ill-effects to the grapes thanks to the thickness of their skins. There was certainly no sign of rot or dilution in what I encountered at this tasting.

Michel doesn’t use Roussanne for his white wines, so the four we tasted – one Saint-Joseph and three Hermitages – were pure Marsanne. Generally speaking they have impressive concentration and a sense of easy opulence. These are invariably very good wines, but 2015 appears to be a vintage for those who value richness over tension in their whites.

The two Southern Rhône wines in the line-up were also single varietals, Grenache this time – and are two of the best Châteauneufs I have tasted to date from this producer. The fruit was fresh, defined and intense but what really impressed was the structure – fine acidity matched with some enjoyably emphatic tannins.

Unsurprisingly for a holder of large positions of Hermitage, it was the Syrahs that stole the show. The Saint-Josephs were impressive, but the top Hermitage wines were exceptional even by Chapoutier’s high standards. Despite the heat, the wines have retained a sense of freshness and avoided any jamminess. “The level of acidity everywhere is quite high,” says Michel, “you don’t feel the heat like in 2000 or 2003… What amazes me in 2015 is the minerality. We were sure to have richness, but we [didn’t] expect to have the minerality of a cold vintage.”

A defining trait of these 2015 Syrahs is the character and intensity of their tannins. Michel described how the winemaking team discussed the “fresh, slightly biting tannins” (understatement number two) and how to handle them. They considered extended barrel ageing, but in the end Michel decided “we don’t correct the vintage… no, we must capture them.” It was a bold decision. These lupine, saw-toothed tannins have delivered some thrillingly textured wines.

Nonetheless these Syrahs are well balanced, and have everything they need for long term ageing. And they’re going to need it: it will take time for these wines to soften, but it will be worth the wait. “After this tasting you will have a black tongue,” he said. And I did.

The tireless Michel has a suite of new projects every year, and he shared some of them with us at the tasting. Although famous for his single vineyard approach to making Hermitage, he is producing a limited number of magnums of blended Hermitage for special occasions such as auctions.

Combining his love-affair with Australia and Portugal, Michel is planting some Touriga Nacional in the Pyrennes region of Victoria, south-east Australia.

We also tasted the first release of Chrysopée, a Grenache Gris/Blanc Collioure under his Domaine de Bila-Haut label. It’s distinctly rich and opulent, but is an impressive example considering the fairly young vine age. One to watch.

One thing however not to expect any time soon is a Carignan. “Carignan – it tastes of Carignan – horrible! You put in 10% it kills the wine,” he pronounced. I knew the new understated Michel wouldn’t last.

Is this the best vintage since 1990? We’ll have to wait until the wines are bottled to be certain. But on the back of this tasting, I wouldn’t rule it out.

Barrel samples tasted at Home House, London on 18th April 2016. Prices will vary between merchants, the below are given as a guide.

2015 Chapoutier Ermitage Blanc ‘Le Méal’
£588.00 in bond per 6 bottles, Fine+Rare Wines
2 ha, 100% Marsanne, 50+ year old vines on alluvial deposits and large stones.
Beautiful mango, rhubarb and raw cream aromas. Very full in body. Good intensity of fruit, weighty but fresh and well balanced – a relatively opulent and easy-going vintage for this cuvée. Very complete and relaxed in its own skin, with mineral detail on the finish. 95-97 points, 2017 to 2033.

2015 Chapoutier Ermitage Blanc ‘De L’Orée’
£622.00 in bond per 6 bottles, Fine+Rare Wines
3.5 ha, 100% Marsanne, from Les Murets. 70 year old vines on pebbles and sand.
Immediately richer on the nose than the Méal, with almond milk and poached peach. Very full, very opulent in flavour and texture, with good persistence. This has good intensity, but perhaps without the liveliness of cooler years. The mineral finish neatens everything up however and lengthens the overall impression. 95-97 points, 2017 to 2030.

2015 Chapoutier Ermitage Blanc ‘L’Ermite’
£1444.00 in bond per 6 bottles, Fine+Rare Wines
0.5 ha, 100% Marsanne, 100+ year old vines on the top of the hill of Hermitage behind the chapel on granitic soils.
Aniseed, lime skin, fleur du sel and a touch of struck-match spicy oak on the nose. Medium- to full-bodied with an intense impression on the palate, incredible intensity of flavour and crystalline fruit. Limey acidity, incredible lift and purity. Long, straight style, saturated with minerality. Tremulous, vibrating finish. A very serious wine. 97-100 points, 2019 to 2045.

2015 Chapoutier Châteauneuf-du-Pape ‘Croix de Bois’
£183.00 in bond per 6 bottles, Fine+Rare Wines
5 ha, 100% Grenache from Bédarrides, 45 year old vines grown on large pebbles and sandy red clay.
Lively, fresh and perfumed red berry fruit, all very open and transparent. Well integrated spicy oak and a touch of liquorice. The palate is fairly full-bodied and rounded with creamy fruit, but is balanced with good tannic crunch, lovely acidity and vibrancy. Medium length. One of the best Croix de Bois yet. 91-93 points, 2016 to 2023.

2015 Chapoutier Châteauneuf-du-Pape ‘Barbe Rac’
£199.00 in bond per 6 bottles, Fine+Rare Wines
4 ha, 100% Grenache grown on galets over red clay and sand, 90 year old vines.
Richer on the nose than the Croix de Bois, with darker brambly fruit. Good definition and clarity to the aromas. Full-bodied, saturated with rich plum and blackberry fruit, but with ample brisk acidity and firm tannins. Good length of fruit into the finish. The alcohol is just a little noticeable at this stage, but it doesn’t detract from what is a successful, rich and succulent Châteauneuf. 92-94 points, 2017 to 2025.

2015 Chapoutier Crozes-Ermitage ‘Les Varonniers’
£131.00 in bond per 6 bottles, Fine+Rare Wines
3.2 ha, 100% Syrah, 60+ year old vines grown on west-facing granite slopes.
Dense, reticent nose with pure brambly fruits. Full, intense and ripe on the palate with slightly powdery tannins. Inky concentration, full extraction. The tannins are a little gruff at this stage, so it would be good to retaste once in bottle. 89-91 points, 2019 to 2024.

2015 Chapoutier Saint-Joseph ‘Le Clos’
£480.00 in bond per 6 bottles, Millesima
<1 ha, 100% Syrah, 15 year old vines on granitic soil.
Darker and denser than the Granits, with some raw beef on the nose alongside violets, liquorice and fresh herbs. A different tannic register to the Granits: massy, thick and sumptuous tannins. The acid level is on the low side but essentially balanced, and it has a good sense of straightness and purity. A pleasing earthiness on the finish. This will be good, and highly complex I suspect, with sufficient time. An ambitious, modern and well-crafted Saint-Joseph. 93-95 points, 2021 to 2029.

2015 Chapoutier Côte-Rôtie ‘La Mordorée’
£348.00 in bond per 6 bottles, Fine+Rare Wines
3 ha, 100% Syrah, 70 year old vines on steep terraces of mica-schist in loess on the border of the Côte Blonde and Côte Brune.
Very much on the fruit here, not so much in the way of herbal or sylvan register. A touch of black olive tapenade underneath. Full-bodied, and packed with ripe, thick, earthy tannins. Long, very dry finish. It will take a while for the oak to fully integrate and the tannins to soften, but this is a good Mordorée. 91-93 points, 2019 to 2027.

2015 Chapoutier Ermitage ‘Les Greffieux’
£582.00 in bond per 6 bottles, Millesima
3.5 ha, 100% Syrah, 50+ year old vines at the foot of the hill grown on alluvial deposits, shingle and clay.
Fresh, perfumed blackberry fruit with some integral dark chocolate and kirsch. Full-bodied, powerful, very fresh and lively, with crisp, assertive tannins and a long finish. Very well balanced, more complete and harmonious than usual. A step up for this cuvée, it feels effortless this year. 94-96 points, 2023 to 2037.

2015 Chapoutier Ermitage ‘Le Pavillon’
£898.00 in bond per 6 bottles, Fine+Rare Wines
4 ha, 100% Syrah, 65 year old vines on granitic soils from Les Bessards.
Deeper, slightly meatier than the Méal, but less effusive in fragrance – smells like bottled ink, blackberry juice and fresh herbs. Easy, smooth and svelte on the palate but it harbours a considerable weight of super-fine tannin, all perfectly ripe and not overdone. Wonderfully intense expression of pure lively fruit on the palate. It has a elegant mouthfeel, and really builds in power to a very long finish. Plenty of acid, very saline, highly mineral – an athletic wine. 97-100 points, 2025 to 2050.

2015 Chapoutier Ermitage ‘L’Ermite’
£1000.00 in bond per 6 bottles, Fine+Rare Wines
3 ha, 100% Syrah, 80+ year old vines at the top of the hill around the chapel on loess over granite.
Dark, deep, brooding. Aromatically this veers towards the mineral; petrichor and fleur du sel. Sublime freshness, almost like sea air. Full-bodied, but strapped in with tannin. The quality of the tannin is very impressive; highly assertive, almost saw-toothed. But crucially they are ripe and elegant. This is incredibly long and pure. It will take time to come around, but will be superlative. Straight, long, as smart as a whip. 98-100 points 2027 to 2060.