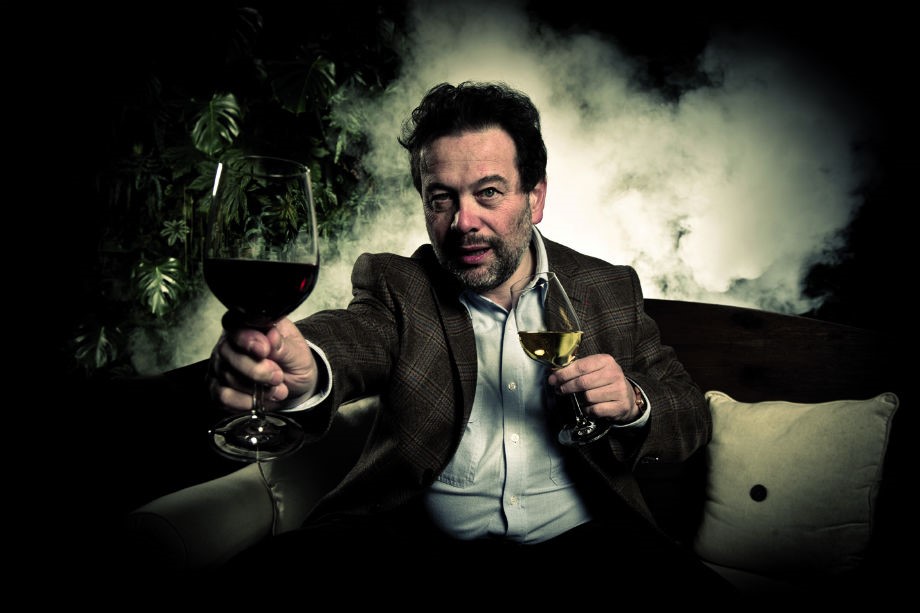 I moved to London in August 2003 on one of the hottest days in living memory. Not the ideal conditions for shifting furniture up flights of stairs. Not brilliant for making balanced wines either; 2003 is remembered across Europe as The Hot One. In England it turns out we had it relatively easy; in France the temperature peaked in the Southern Rhône at 42.6°C. The heat was actually killing people; there were 15,000 more deaths in August 2003 compared to an average month.

To begin with, Rhône magnate Michel Chapoutier thought 2014 might be another 2003. The winter was warm, and so was the spring, resulting in a vegetative cycle that was three to four weeks in advance of a normal year. May and June continued in the same fashion, coupled with precious little rain. “There was drought, drought, drought – with stress showing on the leaves even earlier than in 2003,” he noticed. But after June, the comparisons stop. “In July, the rain and cold weather arrived – and it was very challenging.”

Much of the summer was cold and very wet. The rain brought with it the threat of disease, particularly mildew, which is difficult to treat for winemakers like Chapoutier who farm biodynamically. Thankfully most of his best sites are on steep slopes, so the rain drained away without causing serious issues. On 25th August, a new weather front took hold which resulted in warm, dry weather that was more normal for the time of year.

In 2003, he harvested his Méal vineyard on the hill of Hermitage on 14th August at 15.5% potential alcohol. In 2014, he started harvesting the same vineyard on 8th September. So the grapes had an extra four weeks on the vine in 2014 compared to 2003, which Michel sees as a big benefit: “one month more to prepare the baby during the pregnancy.”

Though the work in the vineyards in 2014 was challenging, in the cellar things were more straightforward; “the aim is a long, slow fermentation – as long and slow as possible – and that is what we observed” which has led to “a natural selection of subtle, stable tannins.” For Michel, 2014 was “a vintage for lazy winemakers, but sharp winegrowers.”

Powerful Rhône wines from hot years are often lauded by critics upon release; 2003 certainly was, as was 2005 and 2009. Undoubtedly some great wines were made in all three of these vintages, but many lack definition and freshness. Hot, dry vintages can deliver wines that are aromatically blurred, as if tasting through a heat haze – particularly with Grenache in the Southern Rhône, whose propensity to excess alcohol can make matters worse. You taste plenty of ripe fruit and sun in years like these, but the individual site is less clearly defined.

I was worried that the 2014s might disappoint due to such a weak summer. I experienced the weather first-hand; I spent a week in St Joseph in late July when it barely stopped raining (and I had tonsillitis: it was a terrible holiday). But going by this line-up, 2014 is looking stronger than I anticipated.

At a recent tasting in London, Chapoutier showed barrel samples of his top single vineyard 2014s, the Sélections Parcellaires. The Northern Rhône whites were impressive; they had definition and relief, svelte rather than lean, with restrained power. The Northern Rhône reds were also very good, speaking eloquently of their origins, displaying both power and finesse. The two Châteauneufs were good if showing a little lighter than some years at this early stage. Full notes are below.

Michel announced three new wines that will soon be available. The first is a sparkling St Péray made from 100% Marsanne grown on granite called La Muse de Wagner. (Apparently Richard Wagner used to order sparkling St Péray from Chapoutier’s forefathers, but Wagner never actually paid for it. His debt was finally settled by Franz Joseph Strauss, governor of Bavaria, by sending them some beer to compensate.)

Next year we can look forward to a new addition to the Sélection Parcellaire line-up, a new Côte-Rôtie from a recently acquired two hectare southwest-facing vineyard in Neve, Ampuis. We can also expect a new Crozes-Hermitage in the near future, as Michel has just bought a small plot of east-facing vines there.

Future releases are likely to be grown on granite: “a big part of my future will be searching for granite all over the world” he says, even suggesting that granite vineyards in the UK “could be more interesting than limestone”. So can we expect new single vineyard wine from Dartmoor sometime soon? It’s unlikely… but as always with the unpredictable Michel Chapoutier, you shouldn’t rule anything out.

Barrel samples tasted at Home House, London on 19th May 2015. Prices will vary between merchants, but the below are taken from H2Vin as a guide.

2014 Chapoutier Ermitage Blanc ‘Le Méal’
£435 for 6 bottles in bond
2 ha, 100% Marsanne, 50+ year old vines on alluvial deposits and large stones.
Rich in peach and apricot fruit but not overly ripe, alongside hazelnut and a touch of honey. Michel always finds tomato. Very full and rounded, regal almost. Powerfully flavoured, burgeoning complexity. Powerful, long, glittering with minerals and a saline finish. Like a pop-up book of the hill of Hermitage; plenty of angles, lots of relief. 2018 to 2044. 96-97 points.

2014 Chapoutier Ermitage Blanc ‘De L’Orée’
£475 for 6 bottles in bond
3.5 ha, 100% Marsanne, from Les Murets. 70 year old vines on pebbles and sand.
Ripe peach with a squeeze of pineapple. Very round, rich and generous in body. As always with this cuvée, it has a wonderfully expansive mid palate. Silky on the finish, and the buried acidity rides in to deliver a tapered finish. Long in flavour with a slightly nutty finish. 2018 to 2040. 96-97 points.

2014 Chapoutier Ermitage Blanc ‘L’Ermite’
£1150 for 6 bottles in bond
0.5 ha, 100% Marsanne, 100+ year old vines on the top of the hill of Hermitage behind the chapel on granitic soils.
Still some carbonic gas in this sample. Straight, currently quite closed on the nose, but underlying citrus pith and fleur du sel can be discerned. Rounded on the palate, full and powerful with plenty of energy. Touch of rhubarb flavour. Very intense and mineral all the way through. Very long. Honeycomb texture. Power, and length of power. 2022 to 2055. 98-100 points.

2014 Chapoutier Châteauneuf-du-Pape ‘Croix de Bois’
£170 for 6 bottles in bond
5 ha, 100% Grenache from Bédarrides, 45 year old vines grown on large pebbles and sandy red clay.
Rounded and full, lots of juicy Grenache strawberry fruit on the palate but currently relatively reticent on the nose. Plenty of body, but perhaps lacks the concentration of fruit of top years. 2016 to 2020. 89-91 points.

2014 Chapoutier Crozes-Ermitage ‘Les Varonniers’
£125 for 6 bottles in bond
3.2 ha, 100% Syrah, 60+ year old vines grown on southeast-facing granite slopes.
Blackberries on the nose, mostly ripe, some slightly under. Good generosity of fruit on the palate however coupled with a dry, assertive tannic structure. A little raw still but this should resolve. Good intensity and impact for the appellation. It has length and balance. 2017 to 2022. 90-92 points.

2014 Chapoutier Saint-Joseph ‘Les Granits’
£145 for 6 bottles in bond
2.5 ha, 100% Syrah, very old vines on stony granitic soil.
Liquorice and just-ripe blackberry fruit with a touch of meat jus. Dynamic, powerful, mineral and intense on the palate – clearly a very good year for this cuvée. Very long, really makes an intense impact on the palate. It has all the structural markers of a granite-born wine. 2018 to 2028. 94-96 points.

2014 Chapoutier Côte-Rôtie ‘La Mordorée’
£285 for 6 bottles in bond
3 ha, 100% Syrah, 70 year old vines on steep terraces of mica-schist in loess on the border of the Côte Blonde and Côte Brune.
Fairly closed but characteristically sylvan, with black olive and rosemary. Good fruit, but no excess fat. Very smooth, wonderful tannins that grip but are smooth as silk. Good acid line, overall very well balanced. Not terribly long but nonetheless very good. 2016 to 2018. 91-93 points.

2014 Chapoutier Ermitage ‘Les Greffieux’
£350 for 6 bottles in bond
3.5 ha, 100% Syrah, 50 year old vines at the foot of the hill grown on alluvial deposits, shingle and clay.
Aromatically a little unresolved at the time of tasting, but I’ve no doubt it will harmonise in time; liquorice dominates, some vanilla and black olive. Well worked tannins, powerful on the palate. Good acidity, a relatively lean style of Hermitage. There is length, and the final impression is of structure and mineral drive. 2018 to 2034. 92-94 points.

2014 Chapoutier Ermitage ‘Le Pavillon’
£695 for 6 bottles in bond
4 ha, 100% Syrah, 65 year old vines on granite from Les Bessards.
Characteristically inky, herbal and straight in profile. Very full and round, juicy and packed with fruit. Very intense, really injects the palate with dynamic fruit, acid, fine tannins and minerals. Layer upon layer of texture and flavour. Very long indeed, more powerful and saline than recent vintages. Some spice on the finish. 2022 to 2054. 98-99 points.

2014 Chapoutier Ermitage ‘L’Ermite’
£800 for 6 bottles in bond
3 ha, 100% Syrah, 80+ year old vines at the top of the hill around the chapel on loess over granite.
Balsamic, spice, mineral. Very rounded on entry thanks to its wealth of fruit, primarily blackcurrant. Then narrows like an arrow, very straight and mineral. Packed full of fruit, with fine acidity and an endless finish. 2020 to 2054. 98-100 points.