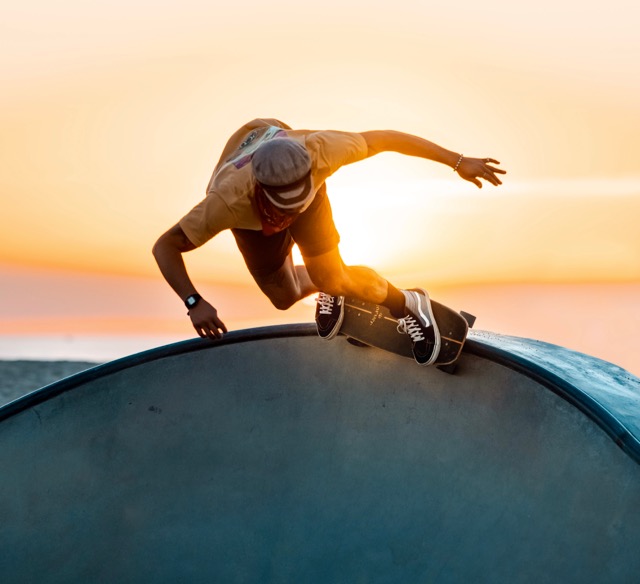 Are some Olympic sports more serious than others? To listen to purists, harrumphing about the inclusion of skateboarding, surfing and BMX freestyle in the Tokyo games, you’d conclude that there’s an established hierarchy. Those that take place on the track sit at the top, partly because of Olympic history perhaps, dating back to 776BC and Korobois’ triumph in the 190-metre stadion sprint. These are closely followed by field events, swimming and gymnastics, all of which are deemed to be “proper” disciplines. It’s no coincidence that Aussies love to mock Team GB’s prowess at “sitting down sports”.

But who gets to decide what is and isn’t worthy of respect? If you think skateboarding doesn’t deserve to be an Olympic sport – and I loved watching every minute of it – what about Basque pelota or ballooning, both of which featured in the Paris games of 1900? My feeling is that pretty much anything qualifies, with the exception of live pigeon shooting (Paris again, as a one off, thank goodness). I even enjoy equestrian dressage.

The Olympics has its faults, but homogeneity is not one of them. At their best, the games really are a celebration of that famous motto – “faster, higher, stronger” – which could be expanded to include the words braver and more skilful. It’s a thrill to watch people with dexterity and dedication excel at different sports.

I think we can draw a parallel between the Olympics and the wine world. Like those so-called proper sports, certain wine regions are deemed to be worthy of greater reverence. For all the changes that have taken place in the last 30 years – the rise and rise of the New World and the ease with which winemakers and their ideas have crossed the globe – the pinnacle of wine quality is still French to most people. Collectors feel the same way. For all the noise about the high prices of a bottle of 1951 Penfolds Grange at auction recently or new releases of Napa Cabernets, they are dwarfed by those paid for top Burgundy or Bordeaux.

That perception needs challenging. Like the idea that terroir is historic and only occurs in certain hallowed places, such as, say, Barolo, the Médoc, the Mosel or the Côte d’Or, the notion that traditional European wine regions, most notably those in France, have no peers elsewhere is ludicrous. The top Chardonnays from Australia, New Zealand and South Africa can rival Burgundian Grands Crus, just as the best Bordeaux style red blends from the Maipo Valley, Margaret River and Stellenbosch can go toe to toe with Médoc Crus Classés.

It may still be true that, at least in some circles, New World producers need to provide twice the quality at half the price to beat the French at their own game, yet anyone who tastes globally will know that parity was reached some time ago. Blind tastings, starting with Steven Spurrier’s 1976 Judgment of Paris, have proved that time and again. Prices may not reflect this, but that often has more to do with snobbery and ignorance than reality.

It’s not just the New World that has challenged the old order. The thrilling improvements that have occurred in countries like Austria, Croatia, Georgia, Greece, Italy, Portugal and Spain have introduced us to new aromas, flavours and grape varieties. It might be a bit of a stretch to call an Assrytiko from Santorini, a Kisi from Kakheti or a Baga from Bairrada the wine world’s equivalent of Olympic skateboarding and surfing, but those styles, among others, have brought thrilling diversity and excitement to the table.

Pessimists may complain that too many wines taste the same these days, but the opposite is true. Who know if climate change will bring it to an end, but for now we are living through a golden age. Great wine from so many different places has never been better. And, in most cases, it’s comparatively affordable, which is not something you can say of most top French wines.

I’m missing the Tokyo Olympics now they’re over. No more handball, no more table tennis, no more BMX freestyle to keep me awake at two o’clock in the morning. But the spirit of these games – defiantly successful in the teeth of the pandemic – will live on. For what’s left of summer, I’m going to celebrate that by drinking as many different wines, from as many different countries, as I feasibly can.

Originally published in Harpers; photo by Ash Edmonds and Unsplash