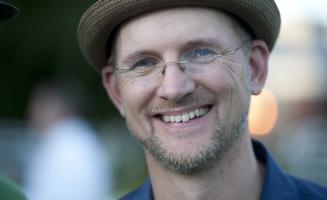 What would a neo-Prohibitionist make of the International Pinot Noir Celebration in McMinnville, Oregon? There’s enough wine consumed over the course of the three day festival to stock a chain of off-licences. And then some. At the communal dinners that are a key feature of the event, Pinotphiles wander from table to table exchanging rare bottles.  “I’ll swap you a Lafarge for a Lafon,” I heard one reveller tell another.

Rightly described as the grandfather of American wine festivals, the IPNC has just celebrated its 25th birthday. Each July a cuvée of 800 winemakers, sommeliers, retailers, importers, journalists and consumers head to the manicured grounds of Linfield College to talk, taste and above all drink Pinot Noir. Nothing in the world of wine can quite match its combination of relaxed camaraderie, informed discussion and great food and vino.

The day before the IPNC began, Eyrie Vineyards hosted a once-in-a-lifetime vertical tasting of its South Block Pinot Noir. It was an appropriate moment to remember its creator, David Lett, who was one of the pioneers of the Oregon wine industry. Lett died in 2008 and South Block was his proudest achievement. We tasted 29 vintages in all, ranging from the 1975 (the first) to 2007 (the last), skipping 1977, 1978, 1979 and 1984, when no wine was made.

The event was a moving tribute to Papa Pinot’s passion, vision and talent. Many of the wines had aged brilliantly, fully justifying Lett’s belief (forcefully communicated to anyone who doubted him) that at its best Oregon Pinot could compete with great Burgundy. The 1993, in particular, is one of the most nuanced New World wines I have ever tasted.

When Lett planted his first vines in the late 1960s, McMinnville was known as the turkey capital of the United States and had a population of 7,000 people. Today it is known as the heart of the increasingly impressive Oregon wine industry and has a population of 35,000, many of whom work directly or indirectly in the business.

McMinnville is also the home of IPNC, whose development has mirrored that of the town. To launch the initial celebration in 1987 a group of little known Oregonian winemakers, including Lett, Dick Ponzi and David Adelsheim, persuaded some eminent Burgundian vignerons to fly to what, according to Adelsheim, “must have seemed like Indian country to someone from Beaune “. He needn’t have worried. Robert Drouhin, one of those French visitors, was so impressed that he established his own winery, Domaine Drouhin Oregon, the following year and famous Burgundians have been coming back ever since, happy to share their wines and winemaking techniques.

Attending  IPNC provides you with a snapshot of  Oregon Pinot Noir’s progress. It also shows you how it stacks up against the rest of the Pinot-producing world. At the two al fresco tastings, Oregon winemakers poured their 2008s and 2009s alongside colleagues from New Zealand, Australia, Italy, Canada, Chile, Champagne, California, Austria, Washington State and, of course, Burgundy. Significantly, many of my most exciting finds this year were from Oregon.

Not everyone gets, or wants, to participate in the IPNC tastings. There were 35 featured Oregonian  wineries this year, out of a total of 400 in the state. The line up included many of the top names, such as  Adelsheim, Amalie Robert, Antica Terra, Archery Summit, Bethel Heights, Clawson Creek, Domaine Drouhin, Elk Cove, Evening Land, Eyrie, Montinore Estate, Penner-Ash, Ponzi, Soter, Stoller, Twelve and Willakenzie Estate. To that list I’d add Chehalem, Bergstrom, Beaux Frères, Saint Innocent and Cristom, whose cellars I visited while I was in Oregon.

The average quality of the local Pinots has improved dramatically since my first visit to IPNC in 2000 and moved up a notch since my second in 2005. New players have entered the market, the vineyards are getting older, the clones more diverse and the winemakers more experienced. Over-oaking is less of a problem than it was and the best wines really are world class. More importantly, they cover a variety of styles, based on differences of soil type, climate and winemaking.

Producing Pinot is never cheap, in Oregon and elsewhere. It was one of the subjects discussed during a fascinating “Grand Seminar” and tasting featuring Véronique Drouhin of Domaine Drouhin, Jim Clendenen of Au Bon Climat, Dominique Lafon of Domaine des Comtes Lafon and Larry McKenna of Escarpment Vineyards. “Just do the maths,” said Clendenen. “New French barrels cost $1200 each and good Pinot has to be made from low yields. You can produce Pinot under $20, but making world class Pinot is all about attention to detail. And that costs money.”

Whether it’s Pinot Noir, Pinot Gris, Chardonnay or Riesling, Oregon is never going to produce wines that appeal to the mass market, The economies of scale aren’t there, the climate can be tricky (2011 is set to be the latest vintage ever) and yields are often small. But what it lacks in size, it increasingly makes up for in quality. Like the IPNC, the wine industry has come a long way in 25 years.