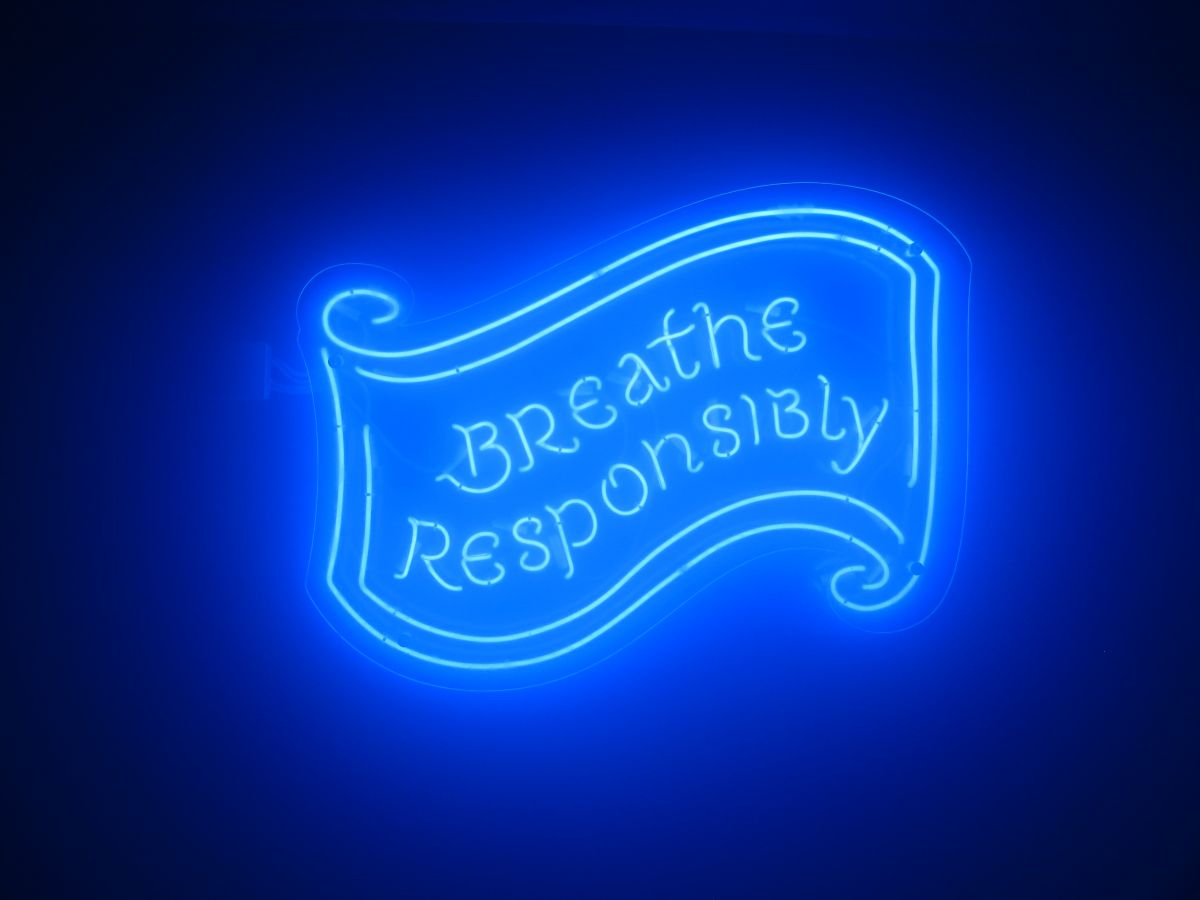 Like most kids of my generation, I was obsessed with Star Wars. My favourite scene was the Mos Eisley Cantina, where Luke Skywalker meets Han Solo in a violent dive bar teeming with various rubber-headed aliens drinking bubbling concoctions and inhaling noxious vapours. So the idea of inhaling a drink rather than actually drinking it still feels excitingly futuristic to me. But this brave new world of breathable drinks is already at hand. I tried a selection of sprays, mists and vaporisers to see if this really is the future of drinking. The WA|HH Quantum Sensations spray is a collaboration between designer Philippe Starck (he of the tripod lemon squeezer) and Harvard professor David Edwards. It holds 2ml of alcohol and delivers just 0.075ml per spray, which is designed to deliver a fleeting feeling of light-headedness with a lingering flavour.

It takes the form of an engraved metal tube the size of a lipstick, into which you insert one of two plastic pods: Fresh Flash or Spicy Demon.

After some vigorous pumping, it coughed a small spray onto my tongue. Any perception of alcohol was overcome by a burning sensation that lasted for several minutes before gradually fading. It didn’t taste great; cheap vodka, or cheap vodka with Szechuan pepper for the spicy version. Like a fancy breath freshener with added fire, I’m not quite sure when or why I would use this. I can’t see it catching on. 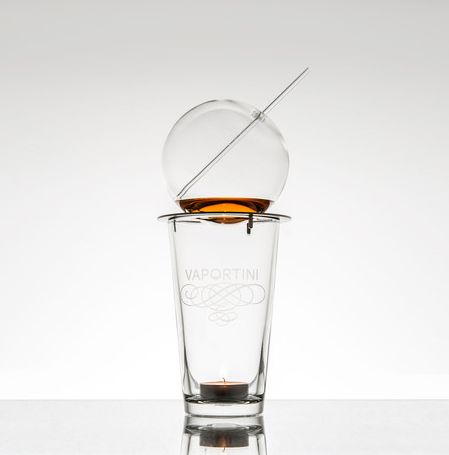 Anything denounced by a hysterical Daily Mail article tends to be worth trying, so I was intrigued to get my hands on the Vaportini. It consists of a glass sphere with a hole into which you pour your choice of spirit. The sphere sits on a stand that fits over a pint glass, with a candle at the bottom. Once the spirit starts to evaporate, you suck up the vapours with a metal straw. Detractors claim it is potentially dangerous, pointing out that because the alcohol bypasses your stomach, natural ways of regulating your intake such as vomiting aren’t available. Jack Faller, COO of Vaportini, counters that “fear media sells… We have sold 50,000 units in the last three years. There hasn’t been even a hospital visit because of the use of a Vaportini.”

It’s actually a simple and elegantly designed contraption, but you wouldn’t want your mum to walk in while you’re using it; if feels like some sort of bong for booze. I tried it with a shot of Edinburgh Gin. The vapours were pleasantly warm, smooth and aromatic, and did reflect the gin, though the higher-toned floral and spice I could pick up by smelling a glass of it were less apparent. Though the flavour hit was frustratingly brief it did deliver a light-headed sensation from the alcohol. For all the hysteria, using the Vaportini is hardly dramatic; but while staring at the thin glass globe filled with warm spirits sitting above a lit candle, it wasn’t hard to imagine how this could quickly change. The Vaportini undoubtedly works, but I found it made me thirsty. So I made myself a G&T, which, I must admit, was rather more enjoyable. 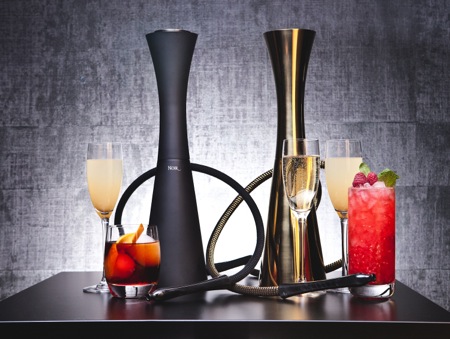 French military helicopter pilot Eric Gormand discovered smoking shisha pipes whilst on a tour of duty. After 10 years in the army he left to develop his own range of high-end pipes called Airdiems. Unlike shisha pipes they don’t use tobacco; instead they vaporise any liquid that is placed in the bowl by heating it with charcoal. To try the Airdiem I visited Noir, a cocktail bar near Bond Street in London, which has been granted UK exclusivity. Bar manager Monika Mak gave me a demonstration, explaining “we tried to smoke everything when we started – coffee, chocolate, mascarpone cheese… you can smoke anything that is natural and can be turned into a liquid.”

Mostly, however, they vaporise cocktails: I tried a blend of Cointreau, Solerno blood orange liqueur and a drop of lemon essence oil. The result was enjoyably fresh and citrusy, like smoking a clean, alcoholic cigar but with a lighter-bodied mouthfeel. The flavour is fleeting but when served alongside a Kiss Me Deadly cocktail in conventional liquid form (mandarin and lavender shrub, gin, champagne) the two complemented each other nicely. Although my experiment in vaporising Chianti was less successful, my only regret was organising the meeting first thing on a Monday morning. You can’t spit vapours like you can with a liquid, so it put a rather interesting slant on the rest of my day. 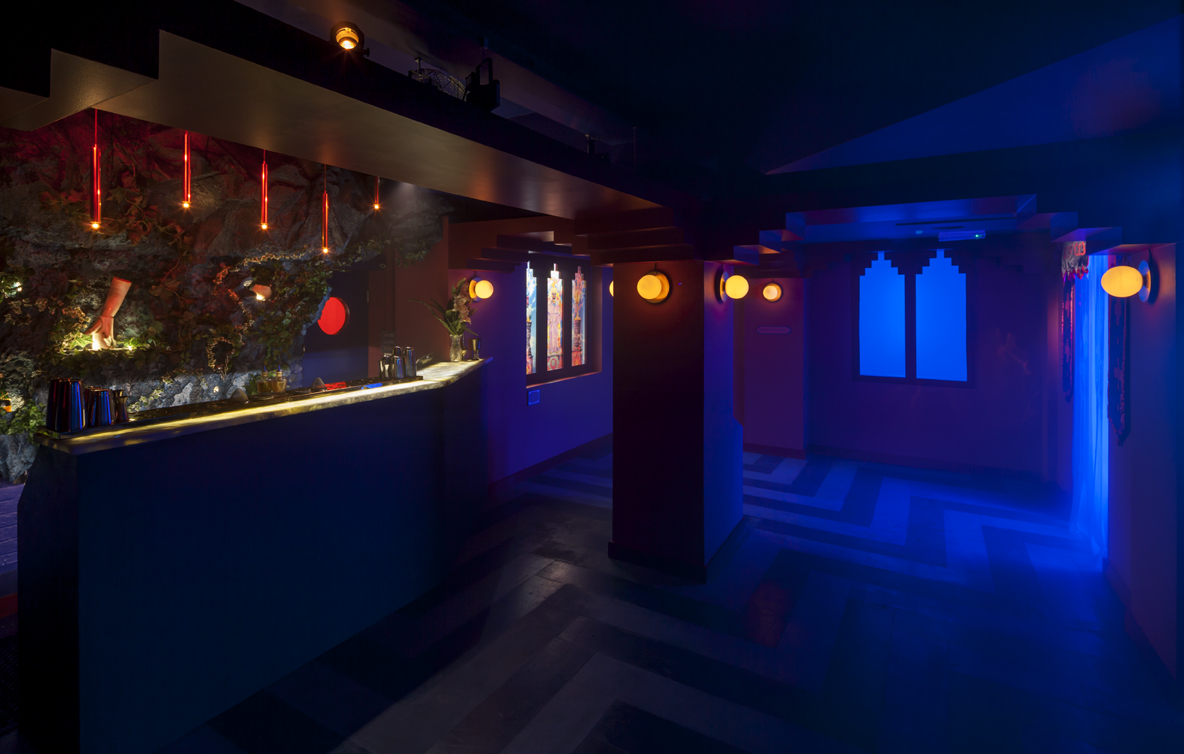 I arrive just before opening time at the bar and knock on the door. “I’ll be back in a minute, I just have to feed the snake” says Sam Bompas before he lets me in. Customers “get a little alarmed if they catch me handling an albino snake in the ladies toilet” he explains. Alcoholic Architecture in London’s busy food hotspot Borough Market is the latest installation from flavour conjurors Bompas & Parr. Located on the site of a former monastery, the atmosphere of this subterranean grotto is somewhere between monastic and gothic with the occasional ghost-train flourish, all to a soundtrack of Joy Division under subdued neon lighting.

I came to experience its main draw: a room containing a dense walk-in cloud of vaporised gin and tonic. Visits to the bar are restricted to an hour: 40 minutes in the cloud has the same alcoholic hit as a large G&T, absorbed through your lungs and eyeballs. Breathing through your mouth, you can feel the flavour tingling on your tongue; lemon, juniper and quinine are just about discernible. When you’ve had an eyeful, you can drink cocktails in the adjoining bar, all of which feature drinks which owe their existence to monks, such as Chartreuse, Benedictine, and, er, Buckfast.

“We’re giving people a different way to taste gin” says Bompas. In terms of pure flavour, I would still choose to drink it, but it gets you talking and thinking about drinks in new ways. It’s also great fun. He believes that Alcoholic Architecture is “an entertainment, a piece of theatre where the consumers are the actors” rather than a just a bar. Its other function is to help to fund their new project, the British Museum of Food, which will open next year on the same site. It will be a more conventional, permanent attraction – but Bompas & Parr couldn’t do boring if they tried.

These aren’t the droids you’re looking for

Although some methods are more successful than others, it would seem that inhaling drinks isn’t quite the exciting future I’d imagined – at least, not yet. They all produced a light-headed buzz similar to swallowing alcohol, but none of them delivered the intensity, clarity and length of flavour you experience from sipping a good quality drink from a glass. That’s not to say they aren’t enjoyable; the Airdiem in particular delivers an enjoyable if evanescent burst of flavour. You can imagine how this or the Vaportini could add a third, vaping dimension to the hitherto binary field of food and drink matching. What they do guarantee is a bit of fun and theatre. Drinks vaping is still in its infancy, and if current methods and technology improve it could become more compelling. But in the meantime, I can’t see the highball or the wine glass being consigned to the museum quite yet.