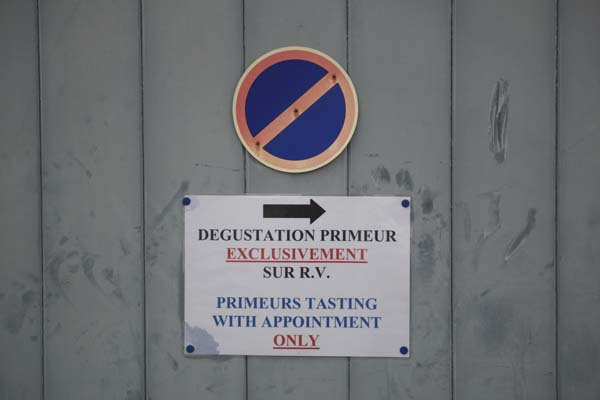 Before the unveiling of my anxiously anticipated scores for 2014 Bordeaux (many of which fall between 90 and 98 points, and have pretty much been randomly assigned), I thought it might be appropriate to outline my methodology. The real question is, which comes first, the methodology or the outline? I never even realised I had a methodology until I began the outline. I find that my methodology is a hindrance at primeurs week in Bordeaux, and that, for a methodology, it’s pretty much improvised anyway. For example, I taste all the wines blind, except the ones that I’m not able to. I’d tell you which are which, but, frankly, you’d misinterpret that information because you’re simply unqualified.

So, for the sake of clarity, assume that all the wines I’ve scored were tasted blind. By someone. I’m a big proponent of Natural Wine Reviewing, which, like Natural Wine, absolutely depends on faith, and the consumer’s willingness to completely overlook something that smells suspiciously like bullshit. And ask yourself if any of this even matters, considering that the barrel samples offered at primeurs week are more manipulated than a zoo baboon’s bright red Suckling in front of the kiddies.

I flew to Bordeaux for primeurs week despite my otherwise busy schedule. Loyal readers may recall that I was unable to attend in both 2013 and 2014 — in 2013 I was being knighted, and in 2014 I was training for the Tour de France, which I would have won but for how much momentum I lost from the baseball card in my spokes. All went well this year, and when Robert Parker decided not to attend, I was first on the waiting list under “High Scorers.” There has been much speculation on what effect Parker’s absence will have on prices. Many of us opined that Neal Martin’s scores will be just as influential as Parker’s would have been, and we all got a jolly laugh out of that. Oh, we do have fun at primeurs week. We even had a phony crib sheet printed up, with the Union des Grands Crus logo and everything, that we slipped to Neal, and that he believed to be the legitimate one. We all laughed as Neal began correlating his tasting notes with the fake crib sheet. But don’t worry. It won’t matter in the final analysis. Wine Advocate numbers are predetermined, and tasting the barrel samples simply part of the show. It’s just like the old Soviet-era Olympic gymnastics judging. It’s so much easier and relaxing when you know the scores ahead of time.

When the tasting begins, we writers are assigned to groups according to whether we like to taste the wines blind or not, and whether we prefer to taste topless. I usually choose the group that tastes blind and topless because I prefer to keep my expensive shirts clean, and there are some wine writers with tremendous hooters. I’m looking at you, Clive Coates. It seems that every year I’m grouped with the same people. We wander into the lovely tasting rooms of whichever châteaux have swallowed their pride and volunteered to host us. There are plenty of white tablecloths and spittoons, and, oddly, coin-operated foot vibrators, which become the choicest seats. My group includes Michel Bettane, Lance Armstrong, Kim Kardashian (oh, she lights up the topless room), Squeaky Fromme and Vanilla Ice. It’s Lance Armstrong who hogs the vibrator.

More and more estates are withdrawing from the UGC tastings and so it is also necessary to book appointments at many châteaux. Unlike most of my fellow wine writers, when I taste at a particular château, I taste blind. I cover my eyes as I approach so that I cannot see at which château I’m about to taste. I am completely firm about this protocol, despite the objections of the passsengers in my car. Such nervous little weenies. It’s a fucking rental! Get over it.

Because of Easter, primeurs week was crammed into four days instead of five, and we ate a lot of candy. Easter seemed an apt occasion for primeurs week. After all, they’re both antiquated pagan rituals practiced by old people who no longer believe in them, but just love the hats. The shorter schedule meant that I was able to taste most of the wines only once, but, believe me, that was a blessing. As you’ll see when I finally release my scores (as is my methodology, I wait for others to release their scores first so that I can be certain I am not in agreement with a couple of those morons), I was not favorably impressed by the vintage.

At the moment, the wines are on the lighter side, and I’m hoping that, with time, they’ll put on weight, like my ass. This is what we always say. We tell you the wines aren’t showing well now, but, should you be stupid enough to load up on futures, there’s a chance the wines will turn out to be great. And if they don’t, well, we told you the barrels we tasted from were adulterated, we told you they’d change considerably after they’re bottled, we told you not to read too much into any specific notes…

Read between the lines, asshole. We don’t like the vintage, we’re not buying the wines, we were in a huge hurry to rate a stupid amount of wine and did so rather cavalierly, but we really like getting invited every year.