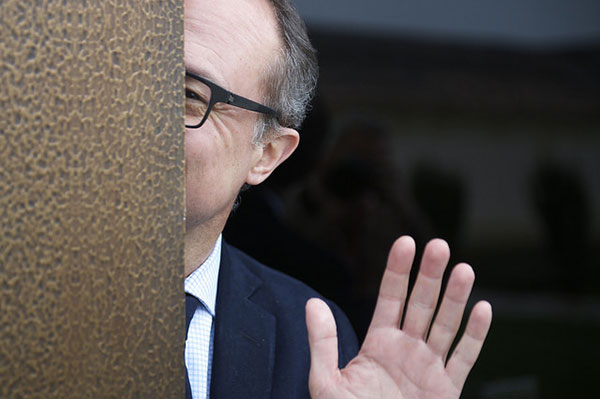 Remind me never to play poker against Frédéric Engerer. On Thursday evening last week, I was tasting at Domaine d’Eugénie in Vosne-Romanée with the CEO of Artémis Domaines and asked him about the impending sale of Clos de Tart. The 7.53- hectare Grand Cru had been on the market since the spring, but there were very strong rumours that a deal was nigh. Interested parties were said to include Roederer, Dassault and a group of Chinese investors represented by FICOFI, but what about the billionaire François Pinault, the founder of the umbrella Artémis Group? Engerer played a straight bat worthy of Geoffrey Boycott at his stonewalling best. “If Monsieur Pinault has bought it, I’m sure I’d have heard about it,” he said.

Within 24 hours, Artémis had added Clos de Tart to a wine portfolio that includes Château Latour, Château Grillet, Eisle Vineyard and Domaine d’Eugénie for an undisclosed sum. Engerer himself had presumably overseen the deal, or at least been party to it. The final price was allegedly €280 million, setting a new record for Burgundy.

What is certain is that the value of the best Grands Crus is going up by the month. Earlier this year, the American businessman Stan Kroenke paid €200m for Bonneau du Martray (the equivalent of €18.18m per hectare); the Clos de Tart purchase was €37.18m per hectare, although the final price included stock and the buildings. In the circumstances, LVMH’s acquisition of neighbouring Clos des Lambrays for €101m in 2014 (€11.66m per hectare) almost looks like a bargain.

Like the Bonneau du Martray sale, that of Clos de Tart seems to have been a source of family friction. The Mommessins have owned the Grand Cru monopoly vineyard – one of only five in Burgundy – since 1932 and, according to Didier Mommessin, head of the company that bears his surname, he didn’t want to part with it. But with 21 shareholders the decision was “inevitable”. Great vineyards, he added in an interview with Le Bien Public, Burgundy’s local newspaper, are becoming like works of art. “There will be other sales of this type,” he added ruefully, comparing it to bidding for a “Basquiat at Christie’s”.

He’s definitely right about that. In the history of Burgundy, there have been four moments that saw a significant shift in vineyard ownership. The first was after the French Revolution, the second after phylloxera, the third after World War I and the fourth is happening right now. The higher the prices – and the stratospheric sums paid for the Grands Crus are having a trickle-down effect on Premier Cru, village and even generic land – the more tempted people are to sell, especially if they are faced with punitive inheritance taxes.

If Clos de Tart is worth €250m (or thereabouts), what would someone pay for Domaine de la Romanée-Conti? Three years ago, a reliable source told me that a prospective buyer had offered €75m for a single hectare of Richebourg. Given that DRC owns 27.99 hectares of Grands Crus (including 3.51 hectares of Richebourg), its asking price could be €2bn. Who would part with such a sum? There would be no shortage of bidders, according to micro-négociant Olivier Bernstein. “Anyone with capital is happy to buy vineyards at any price.”

There is an old saying in Burgundy that vignerons “live poor and die rich”, but a growing number of them have decided to cash in while they are still active. The pressure to do so has been made more acute by a number of small crops in recent years, especially in frost and hail-hit 2016. The abundant 2017 harvest may have eased that to a degree, but the reality, as Jean-Louis Trapet of Domaine Jean-Louis Trapet puts it, is that “there have never been as many sellers – or buyers.”

The spiralling value of land is having an impact on the price of the wines they produce, although even they can’t keep up. But what’s even more worrying is that most Burgundians can’t afford to buy top vineyards any more. As recently as the early 1980s, it was possible to purchase a hectare of Grand Cru and pay off the investment in three years, just by selling the wine it produced. Now it takes three generations. Or more. Only big businesses (the Faiveleys, LVMHs and Artémis Groups of this world) or very, very rich individuals (Stan Kroenke) can afford to play in this league.

Even families who want to keep their vineyards are facing ruinous inheritance taxes, which are calculated according to the value of the land. Philippe Drouhin of the Domaine Drouhin-Laroze says that it took him 15 years to pay the bill after his father died, but is worried about what his children, Caroline and Nicolas, will have to face when he hangs up his pipette.

One solution proposed by François Patriat, a key figure in Emmanuel Macron’s En Marche movement and the senator for the Côte d’Or region, is that inheritance taxes would only apply if families decided to sell their vineyards. The government would lose a considerable amount of revenue, but it would help to secure the future of many smaller domaines. Right now, that future is looking very uncertain indeed.