If any man deserved the epithet, a legend in his own lunchtime, it was Keith Waterhouse. You probably remember him for his plays Billy Liar, made into a film with Julie Christie and Tom Courtenay, and Jeffrey Bernard is Unwell  but his lunching exploits are equally worth celebrating. His work day consisted of rising at 6am, reading all the papers, writing his Daily Mail column followed by lunch that went on until the evening. He wrote a non-fiction work, The Theory and the Practice of Lunch:

“Whether they know it or not, for as long as they linger in the restaurant they are having an affair. The affair is lunch.”

His 1988 novel Our Song about a middle-aged man and his infatuation with a younger woman, revolves around lunch. The nascent affair takes place in the sort of wine bars and trattorias that London used to be full of. The kind of place where one orders a third bottle and a quick lunch lurches into an early supper and things are said that cannot be taken back. It’s hard to imagine their affair taking place in Terroirs over a glass of orange wine from Georgia. I thought it would be interesting to take a trip down the Charing Cross Road to see how the old school wine bars are faring against the new competition. For clarity I have given them marks out of ten for food, wine and how much Keith Waterhouse would have liked them.

‘Ahhhh Beaujolais, that sounds like the place for me. I’ll engage the owner in a conversation about Jules Chauvet and the Gang of Five’. Don’t! It’s not that kind of place. Most of the list is negociant wine, strong on Beaujolais (obviously) but also the Loire. There are some generics and, for as long as I’ve been going, the wine of the week has always been Picpoul-de-Pinet. So why do I like this place so much? Well the food is quite nice, well-kept cheeses and basic Boeuf Bourgignon, but mainly because it’s a really jolly place that has more in common with a pub than a restaurant. If you stay here for more than one drink, you will end up talking to the staff or the table next to you.

Simultaneously wonderful and dreadful, it’s a terrible tourist trap and always rammed and yet the novelty of drinking in a cobweb-infested dungeon never palls for me. The by-the-bottle wine list is uninspiring; more interesting are the rustic sherries and madeiras from the cask. The food is pub lunch, ploughmans and the like and perfectly decent. Oh and be warned, the darkness makes it a haven for thieves. 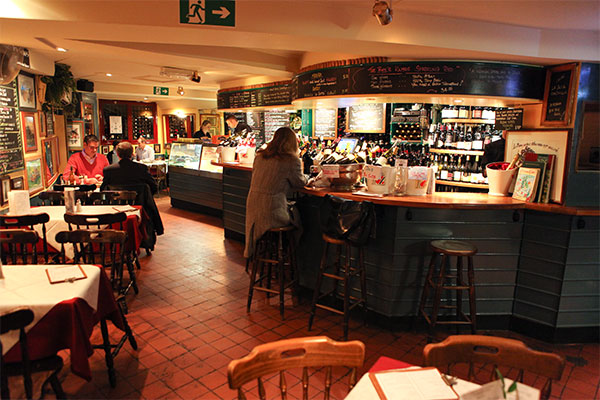 Now here’s a wine list put together by an enthusiast. They’re particularly strong on Australia which chimes with the 80s feel of the place; one half expects Oz Clarke and Jilly Goolden to pop up from behind the counter wielding outrageous similes. It’s not cheap but if you’re with a few friends then you can do some serious exploring. And the food? I’ve eaten here many times and it’s never been less than awful. Particularly revolting is their famous raised cheese and ham pie.

Like Keith himself, an old Fleet Street legend. It’s not as lively as it once was as all the journalists have been replaced by lawyers from the nearby Inns of Court but it retains a certain louche feel. The pies are excellent though the chefs deep-frying skills had gone awry on my last visit. The wine list majors on old Bordeaux vintages for the lawyers and for journalists there’s a good Savigny-les-Beaune from Philippe Girard by the half bottle and a delicious Australian Verdelho by the glass.

Were it not for the decent Rioja section, notably Contino Reserva, then this would win the award for dullest wine list in London. The food isn’t great either. The thing that saves it is the room, which manages to simultaneously airy and cosy, and the clientele, there always seems to be a middle-aged man trying to break up with his secretary at the next table.

I hope I haven’t seemed too harsh. I love these places especially Beaujolais and glad that they still exist but the quality of the food and wine comes second to the company. I imagine that this is just how Keith Waterhouse would have wanted it.

Henry Jeffreys is writing a history of Britain told through alcohol called Empire of Booze. You can order a copy here: http://unbound.co.uk/books/empire-of-booze