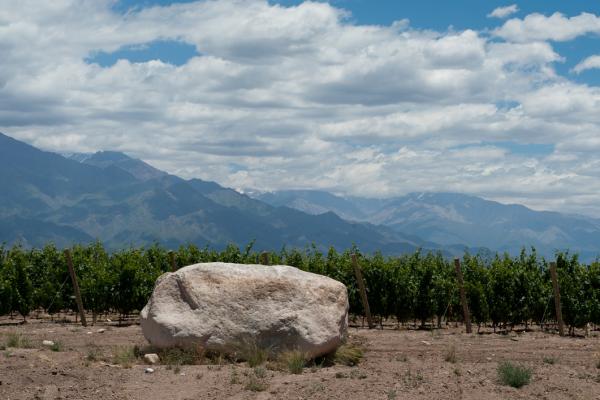 Buenos Aires may be the capital of Argentina, but the hub of its wine business lies nearly 750 miles to the west in Mendoza. Dominated to spectacular effect by the Andes, this bustling provincial city owes its very existence to the mountains. Without snowmelt for irrigation water, there would be no wine industry, or agriculture, in these near desert conditions. And without the wine industry, Mendoza would be a dusty backwater.

The first time I went to Mendoza, in 1993, local winemakers were just beginning to talk about a new, or rather rediscovered, region an hour’s drive to the south west, in the foothills of the Andes. The focus was still very much on traditional areas close to the city, such as Luján de Cuyo and the sun-baked flatlands of East Mendoza, but the Uco Valley was seen, even then, as a place of great potential.

There had been vineyards here at least since the 1920s, planted by intrepid Italian and Spanish immigrants whose old vines are much prized today, but the Uco Valley was considered too far from the consumers and production facilities of Mendoza to be truly viable. Traditionally, Uco Valley grapes were used to add colour and acidity to those from warmer areas, but rarely featured on labels, or in consumers’ minds, in their own right.

When the Argentine government offered an incentive in the early 1970s to plant in hotter East Mendoza, prompting a boom in high-yielding, poor quality Criolla, the more isolated Uco Valley, where flood irrigation was impossible because of topography, went into decline. By the mid-1990s, when the modern boom began, the area under vine had dropped from 18,000ha at its high point to 6,000ha, as growers pulled out Malbec and planted tomatoes instead. Eighty per cent of the vines in La Consulta disappeared within a decade.

Fast forward 20 years and “Uco Valley wine country” is being talked about as the new Napa Valley (in terms of tourist appeal rather than wines), complete with lifestyle second homes and its own golf course. Just recently, O Fournier, a Spanish-owned winery in El Cepillo at the southern end of the valley, started selling vineyard plots to investors at US$150,000 per hectare.

The spiraling price of land is directly related to the quality of the area’s wines. In a short space of time, the Uco Valley has become the most exciting wine region in Argentina and one of the most talked about in the southern hemisphere. It makes the country’s best Chardonnays and Sauvignon Blancs and many of its leading red blends. More to the point, it has added a new dimension to Argentinian Malbec, producing high altitude wines that, at their best, display intense colour and perfume, as well as fresh acidity, dense black fruits and succulent tannins.

Hervé Joyaux, owner of Fabre-Montmayou in Luján de Cuyo, an area that is much more established than the Uco, thinks that the area is over-hyped. “The Uco Valley has been very well marketed because most of the big important bodegas have vineyards there. But there’s a reason for that. Where else could they buy? It’s very expensive here in Vistalba because there’s no more space. We’re only 12 miles from Mendoza, so land here is sold for residential use, by the square metre, not the hectare. The ea stern area is too hot except for certain varieties such as Bonarda, the west is occupied by the Andes and the north is expensive, too, so people have gone south to the Uco where they can spread themselves out over 200 hectares or so. And because they are all there, everyone is talking about the Uco. But it’s not all good, by any means.”

But let’s back up for a second and look at the lie of the land. For even though the Uco Valley is generally considered as a single entity it is far from homogenous. The valley runs north to south and is 70km long and 40km wide. To the south, it is bounded by desert, although cold winds come up from as far away as Patagonia, and to the north by hills or “cerillos” at 1,400m or higher. The east of the valley runs into a series of gorges and dry riverbeds.

In terms of soil types, it is more varied than many Argentine wine regions. At the southern end of the valley, they are mostly sand and sandy loam and what Argentines call “pavimiento del desierto” (desert pavement): rocks and sand eroded by the wind. Further north, above 1000m, the soils are “more interesting” according to Doña Paula’s Edy Del Popolo, one of the top viticulturists in Argentina. “These are still alluvial formations,” he explains, “but they are less modified. The landscape is more jagged with outcrops of limestone in Altamira and river benches in Los Arboles and Vista Flores.”

Del Popolo is a particular fan of Gualtallary, right at the northern end of the valley, where Catena, like Doña Paula, grows some of its best grapes. “These are my favourite soils for top quality viticulture,” he says. “Vines grow moderately because of the cool climate and the poor soils. The vines are small bushes with balanced crops. For me, it is one of the best wine regions in the Americas.”

The Uco Valley is crossed by two rivers, the Tunuyán and Las Tunas, which rise in the Andes and flow into one another near the town of Tunuyán. Even though this is a cool region (at least by Argentine standards), with a diurnal variation of 20°C in summer and 18C° in winter, it is mostly too hot and dry for vines to survive without irrigation, although there are some old, dry farmed vineyards.

As far as growing grapes is concerned, the limiting factor is access to water. This is an agricultural valley (there’s no heavy industry here and roadside fruit stalls, groaning with brightly coloured produce are almost a feature of the landscape) and its 75,000 ha of crops, around a third of them vineyards, need it to survive. Wineries without access to the rivers have to rely on springs or sink costly wells.

What strikes you most about the place when you visit is not its dryness, punctuated by green, water-fed oases of crops and trees, but the light: so bright and intense that you need sunglasses and a tube of factor 50 at nine o’clock in the morning. The air up here in the foothills of the Andes is pure but thinning. Walk up a slope in Gualtallary and you feel like you’ve been on a cross trainer.

The mountains dominate the horizon to the west of the valley: massive, brooding, snow-crested peaks that seem even closer than they are, such is their size. Without the Andes, the region would be unremarkable in terms of beauty; with them, it is one of the most spectacular sites in the Americas.

The area has three sub-regions. From north to south these are Tupungato, Tunuyán and San Carlos. The highest part of the valley (around 1,500m) is at the northern end, where Salentein have their Finca San Pablo, while the lowest is El Cepillo (900m) in La Consulta. The warmest vineyards tend to be situated between 1000 and 1200m, the very areas that also grow cold-sensitive peaches and cherries; above that, the temperature drops again because of altitude.

“Altitude is very important,” says José-Manuel Ortega of O Fournier, “partly because of sunlight intensity, but mostly because of diurnal variation in summer. The high temperatures increase colour and aroma intensity in our grapes, while the low temperatures bring freshness and allow us to preserve acidity.”

The area under vine has nearly doubled in the last decade, from 12,235ha to 23,393ha. The most planted grape by far is Malbec, with 10,230ha (up from 3,166ha), but Syrah, Cabernet Franc and Sauvignon Blanc are also developing fast. Pick the right soil type and (more importantly) the right altitude and you can produce almost anything here, from delicate whites to rich reds.

The Uco Valley is an international valley, developed by outsiders from the United States and France to Belgium and Iran. Maybe it took foreign capital and daring to develop a region that was regarded as marginal by Argentines. Whatever the explanation, most of the top producers, from O Fournier to Achaval Ferrer, Andeluna to Salentein, are foreign-owned. Of the best-known names only Catena, Zuccardi, Mendel, Rutini, Trapiche and Finca Sophenia are fully Argentine.

The three foreign consultants who have done so much to shape the progress of Argentine wines – the Italian Alberto Antonini, the American Paul Hobbs and the globe-trotting Frenchman, Michel Rolland – have all got a stake in the Uco Valley, the first with his Altos La Hormigas brand, the second with Bramare and the third with Val de Flores, Mariflor and as part of the Clos de los Siete group in Tunuyan. The first two buy grapes, whereas Rolland has invested his own money, but Hobbs is in the process of acquiring his first vineyard here.

Antonini, who has been making an Uco Malbec since 1997, believes that the valley is “by far the best region in Mendoza because of its soils, light intensity, warm, sunny days and pretty cold nights. As a result, the grapes have brighter, fresher, more vibrant fruit – red rather than black – with natural acidity and lower pHs. The wines are long and mineral and designed to age.” Hobbs echoes his thoughts: “The wines from our Rebón Vineyard are in La Consulta, which is one of the coolest part of the valleys, and give us bright acidity, vibrant fruit, fine, supple tannin and a solid structure that gives them very good longevity.”

The Uco Valley isn’t only about foreigners, mind you. Catena stands out, not only as the leading producer in the region but in Argentina as a whole, producing high altitude Chardonnays and Malbecs of distinction from its Adrianna Vineyard in Gualtallary. To me, Catena’s Alejandro Vigil is the greatest winemaker in the country. Add the talents of Daniel Pi (Trapiche), Sebastián Zuccardi (Zuccardi), Roberto de la Mota (Mendel), José Spisso (O Fournier), Matías Michelini (Passionate Wines and Zorzal) and Marcelo Peleritti (Monteviejo) and the Uco Valley has an increasingly strong Argentine accent.

The combination of all these factors – climate, investment, soils, altitude and winemaking talent – has made the Uco Valley the most thrilling wine region in Argentina. As the vines get older and grape varieties are matched more closely to specific terroirs, the quality of its wines can only improve. Argentina’s Napa Valley? You bet. That and a whole lot more.

THE UCO VALLEY AT A GLANCE

Number of wineries: around 20 (many producers buy grapes here)

Number of brands: around 100

Soils: Mostly alluvial, with some colluvial soils, river beds and patches of limestone

2007 Andeluna Grand Reserve Cabernet Franc (14.5%)
A wine that shows what a great future Cabernet Franc has in the valley, this is wonderfully perfumed, with grassy, green pepper notes and very fine tannins.

2007 Achaval Ferrer Finca Altamira Malbec (13.5% alcohol)
The best of the range of Malbecs from this high quality winery: fleshy and subtle with intense black and red fruits, subtle oak and great palate length.

2011 Passionate Wines Inéditos Bonarda (11%)
A refreshing, almost Gamay-like take on Bonarda from Matías Michelini. A juicy, youthful glugger with juicy raspberry and red cherry fruit and a hint of spice.