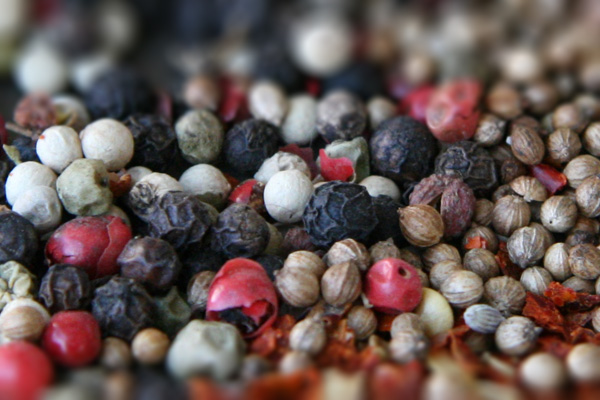 Tasting is an inexact science. Conveying aromas and flavours in words is akin to trying to describe a beautiful piece of music or a great painting: almost impossible. That’s why tasters resort to catch all generic terms, like ‘minerally’, ‘earthy’, ‘fruity, and especially, ‘spicy’. (It is not mandatory that such adjectives end in a ‘y’, by the way, but it seems to help). These words convey a generally impression of the wine’s personality without sounding too finicky or precious.

Should wine writers be more precise? Does the reader want to read about our impressions of galangal, fenugreek and sumac, or will plain spicy do? We all know what spicy means, even if it isn’t one of the five basic flavours (sweet, sour, acid, bitter and umami) that our taste buds can distinguish. Spiciness is a sensation rather than a flavour, creating an impression of warmth on the palate. If you break out in rivulets of sweat every time you eat a hot curry, you’ll know what I mean.

In the glass, some spices are easier to identify than others. If you really, really want to name names, the four big flavours are pepper, ginger, vanilla and cinnamon. The last two are mentioned in my Cedarwood piece about oak (both are flavours associated with new oak, particularly American oak), so let’s focus on pepper and ginger. Pepper, especially black pepper, is commonly associated with the Rhône Valley. The principal red grapes of the northern and southern Rhône, Syrah and Grenache respectively, often betray a twist of the pepper grinder. Of the two, Grenache is the broader, more alcoholic variety, whereas Syrah is more focused and refined. Wines labelled as Hermitage, Cornas and St Joseph are made entirely from Syrah; Cotes du Rhône and Châteauneuf-du-Pape, on the other hand, are usually dominated by Grenache and often blended with other red grapes.

Where else can you find this flavour? Shiraz (Australian for Syrah) is often peppery, particularly if it comes from the cooler-climate vineyards of Victoria. Other grape varieties marked by the same spice include Zinfandel, California’s wonderful near-native speciality, and the central European grape, Kékfrankos. To my palate, the only white grape with a peppery note is Austria’s most planted variety, Grüner Veltiliner.

Ginger is harder to track down than pepper. In fact, only one variety, Gewürztraminer, tastes of the stuff. Revealingly, ‘gewürz’ is the German word for spice. Mind you, it tastes of lots of other things too. If you like wines with a double serving of personality, the signature grape of Alsace combines notes of musk, lychees, rose petal and ginger. A whole bottle of Gewürztraminer can be a little daunting, like sitting down to eat an entire packet of marshmallows, so make sure you drink it with a friend. If you’re cooking Thai or Chinese food, there aren’t many better matches.