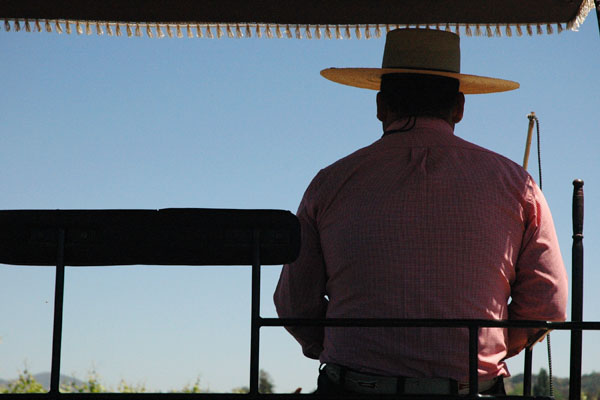 If you’ve ever seen the film “Alive” – and I wouldn’t recommend it if you’re about to tuck into steak tartare – then you’ll know that the Andes are a formidable, as well as treacherous mountain range. The Uruguayan rugby players whose plane crashed in a storm, and ended up turning to a spot of cannibalism to survive, were lucky to get out.

The Andes are also a natural barrier between Argentina and Chile. You might not be aware of them if you’re on holiday in Buenos Aires, over on Argentina’s Atlantic coast, but in Chile, one of the thinnest countries in the world, their craggy, snow-capped presence is visible from almost everywhere. Santiago wouldn’t be half the city it is without the Andes as a year-round backdrop.

South America’s principal mountain range also forms the eastern boundary of the Maipo Valley, Chile’s most historic wine region. On its other three sides, the valley is hemmed in by the city of Santiago (to the north), the Rapel Valley (to the south) and the Coastal Mountains (to the west). In theory at least, the northern limit of the valley is the Mapocho River, but as that flows through Santiago it’s not a useful landmark. You can find vineyards in the southern suburbs of the city, but pollution tends to be a problem here. It is even alleged that one winery used to have to hose down its grapes before they were crushed to remove the lead from the exhaust fumes.

Before the advent of the motor car, proximity to Santiago was a plus rather than a minus. Following the establishment of Santiago de la Nueva Extremadura (as it was known at the time) in 1541, the Spaniards set about planting vineyards nearby. In 1546, Pedro de Valdivia, the founder of the city, granted one of his soldiers a parcel of land in what is now the eastern suburb of Macul. Juan Jaffré planted País or Muscat, rather than Cabernet Sauvignon, but that was the start of the Maipo Valley’s history. Then as now, it was well-drained soils and the proximity of the Maipo River for irrigation that made the valley such a propitious place to grow grapes.

The region’s reputation as ‘the Bordeaux of South America’ dates from a later time, however. After gaining independence in 1810, Chile formed a close bond with France. Chileans who had made fortunes in mining and other industries travelled to Europe and returned with a taste for French food, wine and fashion. It was no surprise that they brought vine cuttings back with them too. The appealingly-named Claudio Gay began the trend in 1830 and a trickle became a torrent by the 1880s.

The combination of Chilean money and French savoir-faire resulted in some very good wines as well as the establishment of a series of lavish estates near Santiago in the 1850ss. Some of them, complete with ornate gardens, still exist today, such as Santa Rita, Cousiño Macul, Undurraga and Concha y Toro. The French link lives on thanks to the investments of William Fèvre (William Fèvre), Bruno Prats and Paul Pontallier (Viña Aquitania), Jacques & François Lurton (Araucano) the Rothschilds (Almaviva and Los Vascos) and the Marnier-Lapostolle family (Casa Lapostolle).

What did the French winemakers and viticulturalists who came to South America as advisors and employees encourage the Chileans to plant? The unsurprising answer is Bordeaux varieties such as Cabernet Sauvignon, Merlot, Cabernet Franc, Malbec and Carmenère (a grape that has sometimes been confused with Merlot). It was these varieties that made the Maipo Valley’s name and continue to do so today.

A quick glance at the statistics makes this abundantly clear. The Maipo Valley produces 85% reds and 15% whites, with Cabernet Sauvignon the dominant variety with 6,2489ha out of a total of 12,432ha. The second most planted variety is Merlot (1,112ha) and the fifth is Carmenère (845ha), both of which are used in Bordeaux-style blends. The region is facing challenges from other red wine areas, such as Limarí, the Elqui Valley, Colchagua and the Aconcagua Valley, but its status as the best area to grow Bordeaux varieties is undiminished.

Just as it was in the mid-16th century, the Maipo Valley remains at the heart of the Chilean wine industry. It may only contain a tenth of the country’s 116,830 ha of vines, but it is home to a large percentage of the country’s best-known wineries. Any list that includes Concha y Toro, Almaviva, Carmen, Santa Rita, Casa Rivas, Undurraga, Perez Cruz, Terramater, Haras de Pirque, Antiyal, Cousiño Macul and Viña Aquitania has a lot to shout about, and shout about it the Maipo Valley does.

Where are the best vineyards? Needless to say, it depends on whom you ask. The Maipo Valley can be divided into three separate areas: Maipo Bajo (Lower Maipo), Isla de Maipo and Maipo Alto (Upper Maipo). To confuse things even further, locals talk about a further area called Maipo Medio (Middle Maipo) between the highest parts of the Alto Maipo and the valley floor, according to Monty Waldin’s excellent Wines of South America (Mitchell Beazley).

Good wines are made in the other two areas, especially in Isla de Maipo, where Tarapacá, Santa Ema and De Martino are the leading names and, on the valley floor, by the likes of Odfjell and Casa Rivas, but the Maipo Alto (and the Maipo Medio) does seem to have something special about it. ‘The Maipo Valley as a whole is definitely the heartland and the spiritual home of Bordeaux varieties and has been for 150 years,’ according to Michael Cox of Wines of Chile, ‘but most of the more complex wines seem to be coming from the Alto Maipo at the moment.’

The Maipo Alto covers the Santiago suburb of Macul (the site of that original 16th century vineyard) as well as the sub-regions of Pirque and Puente Alto in the north and Alto Jahuel and Huelquén in the south. The northern part of the region is the closest to the Andes and has some of the highest altitude vineyards at around 800m. Most of these vineyards are situated to the south of the Maipo river on a narrow north-south band 28 miles long and nine miles wide.

And what of the styles of wine produced here? As we’ve seen, Cabernet Sauvignon is the star. This late-ripening variety appreciates the long growing season, warm days and cool nights that are typical of the Maipo Alto. It’s these cooler nights that set the area apart from warmer ones such as Rapel, Curicó and especially Aconcagua. That doesn’t mean whites can’t be grown here – Haras de Pirque make some very good Sauvignon and Chardonnay, as do Viña Carmen – but reds are better suited. Alongside Cabernet, Merlot, Petit Verdot, Syrah and Carmenère all do well here.

Maipo reds tend to be full-bodied (especially if you compare them with wines from Bordeaux) and blessed with substantial, but ripe tannins. They are often distinguished by pronounced minty flavours, especially when the grapes come from the higher altitude vineyards, as well as their comparative longevity. Wines such as Concha y Toro’s Don Melchior, Santa Rita’s Casa Real and Cousiño Macul’s Antiguas Reservas can age for a decade or more.

Many of Chile’s top reds are produced in the Maipo Valley by traditional and not-so-traditional wineries. The leading traditionalists are Carmen, Santa Rita, Concha y Toro and Cousiño Macul. Much as I like their wines, I think that we are beginning to see even more exciting reds from producers that have established themselves in the last decade, such as the biodynamic Viña Antiyal and Haras de Pirque, El Principal, Pérez Cruz, Aristos and Portal del Alto.

There aren’t many New World vineyards with the Maipo Valley’s pedigree. Constantia in South Africa is one possibility, as is Australia’s Hunter Valley, but neither is as old as Chile’s best known wine region. Viticulture probably wasn’t uppermost in Pedro de Valdivia’s mind when he founded Santiago, but 466 years later, the vineyards to the south of the city are flourishing.