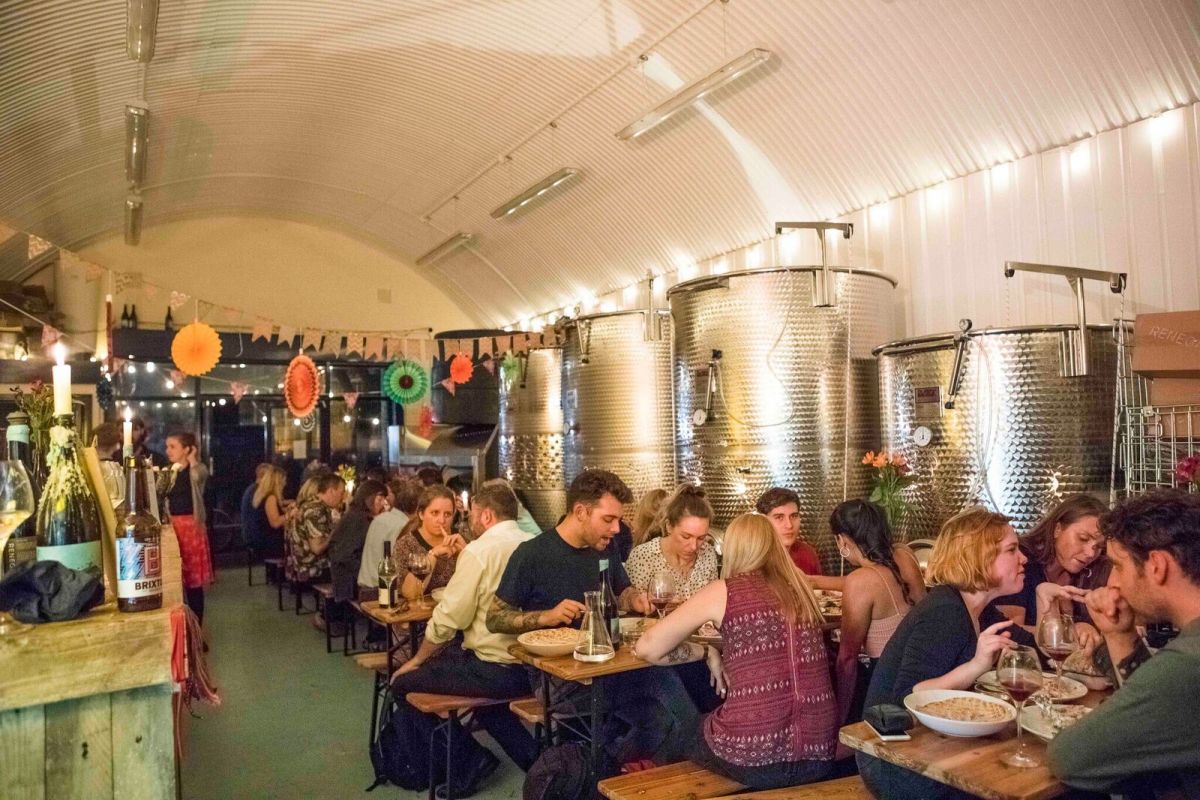 When London’s first urban winery opened in 2013, I was cynical. But London Cru is still going strong, having since won multiple awards for its wines and gained listings in Michelin-starred restaurants. A second winery, Renegade Wines, opened in Bethnal Green in 2016 and a further two are opening in the capital this year. With fruit being sourced from as far afield as Spain and Italy, it’s a phenomenon that raises questions about the practicalities of making wine in this way, but also about how understanding a wine’s origin and broader context can affect how much you enjoy it. They sound gimmicky, but urban wineries could represent a turning point in UK wine culture.

Urban wineries have been popping up in cities around the US for at least 30 years. Renting some cheap space on the outskirts of a city to make wine can make sense, especially if you don’t own vineyards. You might be further from your sources of fruit, but these might change from year to year. And you have a ready market of thirsty winelovers on your doorstep.

Over the past ten years they’ve been popping up internationally in cities like Cape Town, Sydney and Paris. Winemaker and architect Javier Arizcuren owns the only modern urban winery in Rioja, but points out it’s nothing new: “In the seventeenth century there were more than 50 wineries in Logroño city centre, most of them in underground spaces under the houses,” he says. Making wine in cities may not be a novel phenomenon – but shipping grapes from one country to make wine in another certainly is.

“The problems come week by week rather than all together, but they’re all tackle-able,” says Warwick Smith, founder of Renegade Wines. They set up their small London winery and bar in railway arches two years ago, making Pinot Noir and Chardonnay grown in Lombardy, Sauvignon Blanc grown in Bordeaux and Bacchus grown in Herefordshire. “The financial model is very tough to make work,” he says, blaming high rents, London salaries and low volumes, “but London is a good place to do it – we’re close to English fruit and close to France… and you can keep fruit fresh for longer than you’d think.”

The fruit they buy from Italy and France is hand-picked, stacked in small crates and transported at 2 ̊ C in a refrigerated truck for between 24 and 36 hours. I can’t imagine any winemakers would choose to truck their grapes across the length of France if they didn’t need to, but Smith is adamant that “the fruit loses almost nothing,” and they don’t even need to add sulphur at this stage to help preserve it.

Gavin Monery helped set up and made the wines at London Cru before recently moving to Vagabond to help establish their winemaking arm in the new Battersea Power Station development. “The biggest problem is getting fruit,” he says. “There’s a lot for sale but most of it is shit… There’s a lot of driving around involved. I go out and dig a hole in the vineyard to see what’s there.” During his years at wine merchant Roberson (owner of London Cru) he did a dozen vintages around the world and got to know many top winemakers who have proved invaluable by introducing him to diligent growers.

He admits “it’s definitely a bit more expensive” compared to making wine in-situ but he benefits from top-of-the-range equipment that many small domaines lack. “We were whole-bunch pressing Chardonnay in a basket press direct to barrel,” he says, and using premium Chassin oak from Burgundy. “It’s a world’s best practice operation,” he says with pride, “and the wines are £15, not £50… Hand on heart, I don’t think you could find a better wine from the country of origin cheaper.”

Having recently tasted a broad selection at 34 Mayfair (which has a side list dedicated to urban wines) it’s clear that it’s not just a gimmick: some urban wineries are making very good wines that are not overpriced. Those who have concentrated on the age-old combination of well-sourced fruit, talented winemaking and up-to-date equipment can still make excellent wine, even if it’s made a few hundred kilometres from the source of the fruit. But when I drink wines made in London from foreign fruit, no matter how delicious some of them are, it still feels like something is missing: they lack a consistent sense of origin and context.

The more you get into wine, the more you enjoy not just the liquid in your glass, but what’s around the wine. When I drink a Barbera from Piemonte, I enjoy the wine for itself, but it also shines a light on the other wines I’ve drunk from this region, it tells me about the producer’s style compared to their peers, about the country, region and perhaps even vineyard where it’s grown. When I drink a Barbera from Piemonte – but made in London – this context feels somehow diminished. Much as I can still enjoy the flavour, for me it still feels like an anomaly; a wine from AOC Nowhere.

But I’m not the average drinker, I’m a wine geek. In the UK we still suffer from a lot of anti-wine prejudice, and urban wineries might help us get over it. Removing a wine’s context might help people enjoy wine for what it is and start afresh. One man’s context is another man’s baggage.

Because of the high rents, another thing London wineries share is a need for some kind of hospitality side to the business, a bar or events space, to help them sell more wine and make ends meet. They also offer tours. For Monery it’s not just about making the stuff, “it’s about getting people into wine. For a lot of people, it connects a lot of dots; you can see the penny dropping when they get a fuller idea of how it’s made.”

It might be the wines made from foreign-sourced fruit that gets the headlines, but all three London wineries currently in production have dabbled with English grapes. In fact, London Cru won a silver medal at the International Wine Challenge last year for their 2016 Bacchus – the highest-scoring 2016 Bacchus in the competition. This accolade, coupled with an undersized 2017 vintage across Europe, has encouraged them to focus more on English still wines.

Vagabond will be making some wines in-situ under a Vagabond umbrella brand, but will also make wine in London – starting with an English zero sulphur Pét Nat Reichensteiner (“I know, I sound crazy,” says Monery), followed by a Bacchus. Renegade are about to release a £100 Blanc de Noirs from Suffolk Pinot Noir and Pinot Meunier – they claim to have sold 550 out of 800 already.

Concentrating on English wine is a smart move. English drinkers are often happy to pay a premium for English wine. Proximity to source and a shared culture will give the wines that crucial sense of context that wines made from foreign-sourced wines lack. And unlike making French Chardonnay, making English Bacchus is something London wineries have proved they can do better than anyone else. This might sound like faint praise to some, but the wines are increasingly impressive.

Monery suggests that eventually London could support around a dozen urban wineries. I suspect he’s right, and I also believe that as the quality of English wine increases, and more recently-planted vineyards start producing fruit, most urban wineries will specialise in English wine. No doubt they’ll also spread outside of the capital. And as increasing numbers of people in the UK work in their own home-grown wine industry, and the wines become ever more widespread, this too will aid the gradual rehabilitation of UK drinkers’ attitudes to wine.

That London ever made wine from fruit trucked in from France, Spain and Italy might one day feel like just another bizarre footnote in London’s rich wine history. But for now at least, London’s urban wineries still do, so enjoy the moment. “We’re making very good gear,” says Cliff Roberson at London Cru with relish. And they are.

London Cru Sydney Street Syrah 2015 (13.5%; London)
Roberson, £14.99
100% Syrah from near Zaragoza in northwest Spain, wine made in London. Fermented with 30% whole bunches then aged in French oak barrels.
A harmonious, refreshing and drinkable Syrah that’s not pretending to be Rhône, but that’s the closest style of Syrah that comes to mind (or perhaps contemporary South Africa). Blackberry, a touch of charcoal and some underlying herbal aromas. Satisfyingly tannic, good structural acidity, all leading to a medium-length finish. 89 points

Les Vignerons Parisiens ‘Haussmann’ Syrah 2015 (13.5%, Paris)
Available at 34 Mayfair Restaurant, London; £70 on the list
100% organic Syrah grown in Visan, Southern Rhône, wine made in Paris. One third aged in new French 600l oak barrels for 11 months.
Fresh, bright violet aromas, slightly funky too, but with good intensity and energy on the palate. Medium-bodied, balanced acidity, fine tannins and a brisk mineral finish. Less dense and extracted than you might expect from a 100% Syrah from this part of the Rhône. 90 points

Arizcuren Rioja Sologarnacha 2015 (15%; Rioja)
£25.00, Sommelier’s Choice
100% Garnacha (Grenache) made in Javier Arizcuren’s winery in Logroño. 8 months in old American oak, then 2 months in new French oak.
Such an elegant wine, real balance and class. Bright berry fruit on the nose with underlying vanilla, grilled toast and honey; aromatically this concentrates more on fruit than oak. Medium-bodied with a lovely sense of freshness, some dark plum notes on the palate and a refreshing saline edge. Firm acidity and sculpted superfine tannin. Medium length. A refreshingly drinkable and mineral Rioja than can be happily enjoyed without food. 92 points