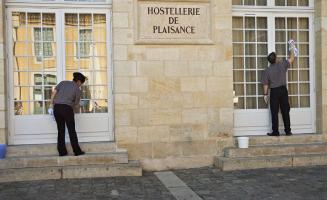 At a drinks party during the Masters of Wine Symposium in Bordeaux last June I was talking to Jean-Guillaume Prats, the general manager of Château Cos d’Estournel. What would the Bordelais do, I mused, if 2010 turned out to be another great vintage? How would they sell it to the trade and the public after the hype (and resulting high prices) surrounding the 2009s? Would anyone believe them? Would anyone buy the wines?

“First,” he told me with a shake of his head, “it’s unlikely because the growing season is two weeks later this year. And secondly, we won’t let it happen.” And yet it has happened. The 2010 vintage is being touted, yet again, as a remarkable vintage in the world’s leading fine wine region. Yawn if you want, but some in the region claim that it is the finest ever in the Gironde.

Back in Bordeaux for the en primeur tasting circus last week, I bumped into Monsieur Prats again. Which of the two vintages, 2009 and 2010, did he prefer? He smiled and reminded me of a famous quote from the past. When someone asked a château owner if he preferred the 1928s or the 1929s, his reply was characteristically Bordelais: “It doesn’t really matter. They are both for sale.”

This isn’t true of 2009 and 2010 yet — the first prices are only just starting to emerge and the first growths may not declare their hand until Vinexpo in June — but the 2010s are about to hit the market as futures. As ever, many of the wines won’t be bottled for at least another 15 months, but that doesn’t matter. There will still be a huge scramble to buy the top crus, many of which are excellent.

The en primeur tastings have been criticised before, but there was something slightly ludicrous about tasting such young wines this year. Some of them hadn’t completed malolactic fermentation, while others were chewy and raw, the result of unprecedented levels of tannin and marked acidity. The process of barrel ageing — known as élevage — will be more important than ever this year. It would be much easier to taste and evaluate many of the wines in April 2012.

But that’s not the way the market works. Everything is about immediacy these days. There is a race to buy the wines and a race (among American journalists at least) to be the first to taste and score them. The only people who aren’t in a hurry are the château owners, who have plenty of money in the bank and know that they have another very good vintage in their cellars. They can afford to see how the market (and certain journalists) respond before they fix their prices.

Can we trust that the samples tasted in April are the same as what will eventually turn up in bottle? It certainly pays to taste (and buy) cautiously. The blends are not finished (several château told me that they hadn’t taken a decision on how much press wine to add) and there is also an understandable tendency to pick the best barrels to show in en primeur week.

One winemaker admitted to me that the sample he was pouring at the Union des Grands Crus tasting came from a new barrel, whereas the finished wine will be aged in a combination of new and one year old oak. “It’s a competition between coopers at this stage,” he admitted.

How good are the wines? Mixed is the answer. This is a less homogenous vintage than 2009, especially at the lower end. Last year, most of the reds had plenty of plump , almost exotic ripe fruit. This year the wines are more classic — or “English” if you prefer — in that they will take far longer to develop in bottle. In their different ways, I like both.

Some châteaux — Pétrus, Cheval Blanc, Ausone, Cos d’Estournel and Margaux spring to mind — made even better wines in 2010 than in 2009, while others have performed equally well in both vintages. But 2010 was a trickier year in my view, which needed careful handling in the winery so that the resulting reds didn’t become over-extracted. There are a lot of firm, chewy wines out there.

No one knows yet what prices are going to do, but it’s hard to see them coming down. Yields were reduced at most châteaux, particularly for Merlot, which suffered from poor flowering, and international demand is high. The Chinese are more interested in dealing direct with Bordeaux this year, rather than using British middlemen, and the Americans are poised to return to the market.

Back here in the UK, there may be less interest this year. The pound is weak against the euro, we’re in the middle of a recession and fine wine collectors have already filled their cellars with the 2009 Bordeaux, Burgundies and Rhônes. But I’m not sure the Bordelais — at least those who own blue chip châteaux – will worry. Their product is bought and traded all over the world these days. Like the 1928 and 1929 vintages, both the 2009 and 2010 are very much for sale.