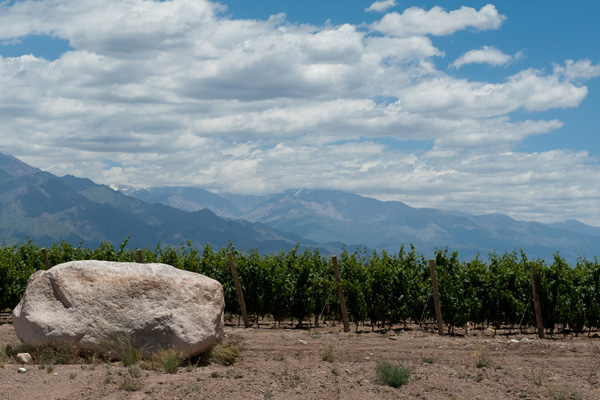 Is Argentina too dependent on Malbec? The question might seem absurd – few countries have managed to associate themselves so successfully with a single grape – but it’s beginning to worry some producers. The partial commoditisation of Marlborough Sauvignon Blanc, a wine style that is even more dominant in New Zealand than Mendoza Malbec is in Argentina, has set a precedent that it be would be unwise to ignore. When your flagship grape dips in popularity or, because of oversupply, price, it can take the rest of the industry with it.

The situation is more acute in the United States, Argentina’s most important export market, than it is here. In the States, 60% of imports are Malbecs, but the figure is pretty high in Canada (42%), Brazil (40%) and the UK (38%) too. Nicolas Catena of Catena Zapata, an acute observer of the international wine scene, thinks that the problem is potentially huge.

“The USA is a fashion market,” he says. “Some consumers just want to buy what’s new and exciting, and for a while that was Argentinian Malbec. Consumers like its smoothness and sweetness. But the growth in the market has stopped, partly because we can’t produce any more Malbec. With our other wines, we are not doing well anywhere.”

Catena is being a little too pessimistic here – Torrontés accounts for 7% of exports to the UK, according to Wines of Argentina – but you can understand his point. If Argentina hangs its reputation solely on Malbec the viticultural diversity for which it is famous will suffer. The country’s unique heritage has given it a rich assemblage of varieties from Spain, Italy and France. Focusing on only one grape, however good and distinctive, blurs it.

So what else does Argentina make? A glance at the vineyard register of the country’s Instituto Nacional de Vitivinicultura is instructive. After Malbec (by far the most planted variety), the next nine red grapes are Bonarda, Cabernet Sauvignon, Syrah, Merlot, Tempranillo, Sangiovese, Pinot Noir, Bequignol (a new one on me, too) and Barbera.

Argentina, it must be said, is not as well suited to white wines as neighbouring Chile. This is reflected in the planting statistics: white grapes make up 23% of the total. But the quality of its white wines is getting better with every vintage. They are unrecognizable today compared with what I tasted on my first trip to Argentina in 1993, partly because of better viticulture and plantings in cooler areas at high altitude (most notably the Uco Valley), but also because of better winemaking and a realisation that white wines are not doomed to be inferior.

On my most recent trip to Argentina, I tasted more than 500 wines, roughly 100 of which were white. My conclusions were twofold: Torrontés, in all its guises, is Argentina’s signature white grape, and Chardonnay makes most of its best white wines. Top Torrontés producers include Colomé, Etchart, Michel Torino, El Tránsito, Susan Balbo (Crios) and Alta Vista, while Catena leads the field with its Chardonnays, ahead of Doña Paula, Terrazas, Lindaflor and Luigi Bosca.

The only other varietals to look out for are Sauvignon Blanc (Zorzal, Doña Paula and Finca Sophenia), Semillon (Mendel), Pinot Gris (F Lurton) and Riesling (H Canale). Also worth tasting is Gala 3, Luigi Bosca’s complex, innovative blend of Viognier, Chardonnay and Riesling.

And what about red alternatives to Malbec? The most obvious answer is Bonarda, which has around 18,000 ha of Argentina’s total of 228,00 ha, compared with 31,000 ha of Malbec, but “it’s not homogenous”, according to Edy Del Popolo of Doña Paula. “It’s still a big challenge for us.” That may be true, but some producers, most notably Zuccardi and Passionate Wines are rising to it. I’m also a big fan of the 2011 Argento BSM, a blend of Bonarda, Syrah and Malbec.

For all that, I believe that most of Argentina’s greatest red wines are blends, especially of Cabernet Sauvignon and Malbec. The most thrilling Argentinian wine I’ve ever tasted – the 2001 Nicolas Catena Zapata – is such a combination, with 88% Cabernet and 12% Malbec. There is something about these two varieties, both south-west French in origin, which seems to work beautifully together in the warmer climate of Argentina.

And yet, to most consumers, Malbec remains what Argentina does best: its aromatic, textured, full-flavoured USP. The problem is that they tend to assume Malbec comes in only one (very big) style. The challenge for Argentinian winemakers is to capture the true diversity of their country’s leading grape, expressing different regional and sub-regional nuances. It’s not an easy trick to pull off, but Argentina needs to make the most of Malbec, while gently guiding consumers towards other wines.

Originally publsihed in Off Licence News