General de Gaulle famously complained about the difficulty of governing a country that produced 246 different cheeses. Dining at El Bulli, the world’s most famous restaurant, leaves you with a similar sense of frustration. How do you summarise, let alone do justice to, a meal that lasts for nearly five hours and runs to 43 courses? Here goes…. 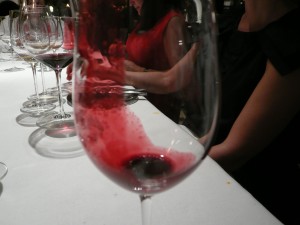 I’ve been lucky enough to eat at El Bulli on five occasions over a space of 16 years. The restaurant has become much more celebrated in that time – there are something like half a million requests for its 8,000 covers – but it looks the same as it always did: a rural Catalan pub with exposed beams, knick-knacks and a few paintings, mostly of bull dogs. Its rusticity, its refusal to be swanky if you like, is part of its charm. You could turn up in a t-shirt and shorts, strolling in off the beach below, and no one would raise an eyebrow.

El Bulli is situated in an isolated cove on the Costa Brava, a 10-minute drive down a thin, winding road from the town of Rosas. There may be people who choose to arrive here in their own cars, but I wouldn’t fancy the journey home after a few glasses of Sherry and those 43 courses. Maybe that’s why the car park is full of taxis: a strange, parallel world where drivers snack on sandwiches, waiting for customers feasting on grilled lulo and mimetic chestnuts. 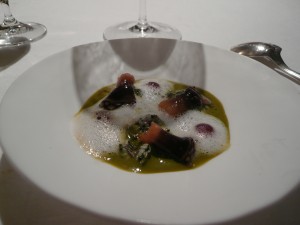 An early dash of foam

A visit to El Bulli often begins with a tour of the kitchens, a gleaming ant heap of chefs, commis and kitchen porters. Ferran Adrià stands at the centre of it all, a genius surveying his creations. It is to his credit that he’s always there in his restaurant, or at least has been when I’ve eaten at El Bulli. He’s a rarity these days: a celebrity chef who actually cooks.

The meal – performance is probably a more accurate word – is split into three acts. You begin on the terrace, with the sound of the waves below you, move inside for most of the courses, then finish back where you started, under the stars feasting from a chocolate box. You can linger for as long as you like. The idea of turning a table is anathema to Adrià and co-owner Juli Soler. So is the idea of over-crowding the restaurant. There are more people in the kitchen than there are customers; the dining room is swing-a-cat spacious. 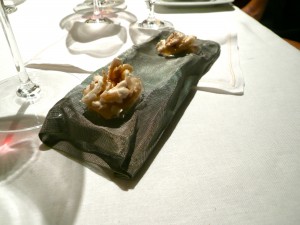 If El Bulli were French, it would be unbearably pompous. Being Spanish, it’s easy-going and relaxed. The menu is fixed (for a single sitting, at least), but El Bulli is flexible about what people eat. If you’re vegetarian, or allergic to a particular ingredient, the kitchen will cook something else for you. Punters who’ve never eaten at El Bulli probably assume that the menu is an amorphous mess: a series of unrelated dishes designed to shock and entertain, rather than satisfy the senses. There’s certainly no shortage of amusement – some of the dishes could have been created by Salvador Dali, who lived up the coast – but the jokes never get in the way of the food.

The menu – all 43 courses of it – is carefully constructed. There are the occasional bum notes (the blackberry risotto with cardamom), but each course serves a greater, almost symphonic whole. The themes on the night I went were seaweed, parmesan cheese, ham, ginger, hazelnuts and red fruits, each sprinkled at recurring moments throughout the meal. Adrià plays with your expectations, but he uses familiarity, too, anchoring the menu to a series of repeated flavours and textures. There is nothing like it, anywhere. 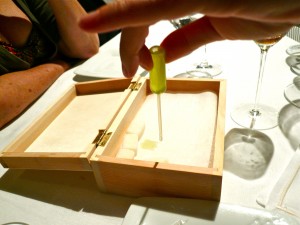 Sugar cube with tea and lime

My favourite dishes? I loved the mojito and apple flute (a cocktail shaped like a sandwich), the hibiscus paper with peanuts, the parmesan marshmallow, the hot strawberries with hare soup and the marrow and belly of tuna-sushi. In fact, I loved almost everything about the food. It was the best meal I have had at El Bulli and that’s saying something.

And the wines? For a three star Michelin restaurant, El Bulli’s list is extremely well priced. It’s cosmopolitan, as you’d expect, but focuses on Spain. I was there with five fellow wine lovers, so we drank eight bottles in all. We took the advice of the excellent young sommelier, Ferran Centelles, who knows the wine list and is used to combining its contents with so many different dishes. We told him to serve only Spanish wines (our one exception was a Moscato d’Asti at the end of the meal) and we made our choices with his help. 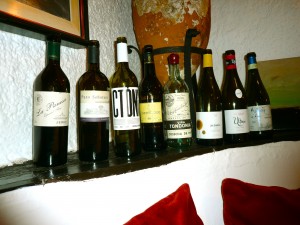 The meal included a lot of seafood, so mostly we drank whites with good minerality, both from local Empordà and from further afield: Rías Baixas, Montsant, Rioja and, of course, Jerez. Juli Soler loves Sherry and you can see why. Its dry, savoury flavours work brilliantly with El Bulli’s umami-rich food. In the end, we picked two Sherries (a wonderful Fino from Emilio Hidalgo and a Barbadillo Amontillado) and five other whites. Apart from the Sherries, my white of the night was the 1981 Viña Tondonia Blanco from López de Heredia. The solitary red was a refreshing, medium weight Bierzo from Raul Pérez.

Eating at El Bulli isn’t cheap, but it’s reasonable in my view. We paid E350 each for 43 courses, eight bottles of wine and one of the greatest meals I’ve ever had. The restaurant is closing next July – or rather switching direction to become a culinary institute once Adrià returns from a two and half year break. “I’m going to be cooking and creating in a place that is not a restaurant. The revolution is in the format,” he told Paul Richardson in The Times recently.

There are still ten months to go, but the great chef says that cooking at El Bulli has become “predictable”. For him, maybe. For those of us who’ve been lucky enough to eat and drink there, it’s anything but. Thanks for the memories.

Those 43 courses (in Spanglish) 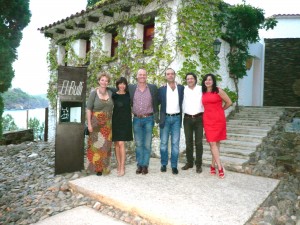