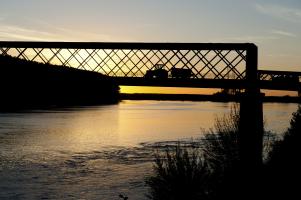 We Brits aren’t very good at scrums, but that’s what the annual Institute of Masters of Wine claret tasting resembles at times, especially around the more popular wines. It’s all done with reserve of course – no angled elbows here – but it’s a crowded environment in which to taste. Imagine a January sale, but with wine thrown in. Heaven knows what it will be like when the 2009s hit town two years hence.

To make things worse, there are time constraints, too. There are two sessions, each 105 minutes long, which means you’ve got less than a minute and a half to taste each bottle. Even if you sniff, swirl and spit like a dervish on speed, it’s impossible to try everything. I managed 60 samples out of 87 in all, choosing the wines that seemed most interesting to me.

In some ways, it’s a relief to taste an ordinary Bordeaux vintage after all the brouhaha about “harvests of the century” in 2005, 2009 and 2010. No such descriptions were used about 2007. Even the Bordelais – the masters of euphemism – admitted that it was “une année difficile”, with a wet and humid August. Only a spell of dry weather in September saved it from a worse fate.

Mind you, Bordeaux doesn’t really do terrible vintages any more, at least at the top end. Selection in the vineyard and cellar and the existence of second, third and even fourth wines means that the horrors we saw in the 1970s, 1980s and early 1990s are a thing of the past. The last really poor harvest was 1992.

At the time of the vintage, this was billed as a Right Bank harvest, but I’m not so sure. Many of my top wines were Cabernet Sauvignon-dominated from the Left Bank. Maybe Cabernet, with its thicker skins, is more resilient to wet weather. For all that, the Left Bank wasn’t homogenous by any means.

Overall, tasting the 2007s this week was surprisingly enjoyable. The average quality was decent and some of the wines are very good, fully justifying one merchant’s description of 2007 as “the best off-vintage ever”. It’s very much a restaurant or “luncheon claret” vintage, providing wines that are good to drink now in many cases. Yes, some of them green and rather thin, but the best are light, charming and refreshing, with much lower levels of alcohol than the 2009s and 2010s. Drink them while you wait for those two to develop in bottle. I’d also keep an eye out for the Sauternes, some of which are lovely.

The wines are mostly reasonably priced. (I have given in bond per dozen prices from Farr Vintners, Berry Brothers, Fine + Rare, Bibendum and Millésima below.) Relative bargains include Montrose, Gazin, La Lagune, Haut-Batailley and Domaine de Chevalier. I also think Léoville-Las-Cases, my favourite wine of the tasting, is well priced for its quality.

Not all of the top châteaux sent their wines for the tasting. No shows included Latour, Ducru-Beaucaillou, Pétrus and l’Eglise-Clinet, but there were still enough of the leading names on the tables to make an informed impression of the vintage four years on. Investors might not like them, but drinkers will.

Château Léoville-Las-Cases, Saint Julien 96 points (£1050)
Less firm than Las-Cases can often be in its youth, this is a beautifully balanced wine with fine-grained tannins, subtle cassis fruit and impressive length.

Château Trotanoy, Pomerol 95 (£800)
The leafy notes of Cabernet Franc really come through on the nose here, but it’s the Merlot that fills the mid-palate. Stylish, long and deceptively forward.

Château Lafite, Pauillac 95 (£7500)
The price, is bonkers, but this is a lovely wine: fine-boned, detailed and comparatively easy to drink with notes of vanilla, blackcurrant and cut grass.

Château Pontet-Canet, Pauillac 95 (£550)
Typical of this property’s progress in the last decade, this is rich, sweet and quite oaky, with grainy, yet muscular tannins and considerable density for a 2007.

Château d’Yquem, Sauternes 95 (£3600)
This doesn’t have the power and concentration of the 2009, but it’s very refreshing, with notes of honey, tangerine and vanilla and zesty acidity.

Château Suduiraut, Sauternes 95 (£445)
Just as good as Yquem and available at a fraction of the price. Exotic peach and pineapple flavours with tangy freshness and subtle oak.

Château Beychevelle, Saint-Julien 94 (£600)
Not the bargain it once was (blame the dragon on the label), but this is a delicious old-fashioned claret: perfumed, light and refreshing.

Château Margaux, Margaux 94 (£3600)
Light, elegant and subtle, with attractive oak, fine tannins and easy-going red and black fruits flavours, but some may baulk at the price.

Château Mouton-Rothschild, Pauillac 94 (£3300)
More powerful than the other First Growths on show, this is more Pauillac-like than the Lafite. A little more obvious, but with good structure for the vintage.

Château Montrose, Saint Estèphe 94 (£560)
Montrose can be a chewy mouthful in great vintages, but this is considerably lighter. It’s still firm, but the Cabernet fruit really sings here.

Château Léoville-Poyferré, Saint Julien 94 (£450)
A property that is in a rich vein of form right now, this is slightly gamey, but it’s long and textured with hints of wood smoke and cassis and a long finish.

Château Pichon-Lalande, Pauillac 94 (£700)
The lighter of the two Pichons in 2007 (it usually is) this is a classic 2007: forward and gentle with good freshness and lightness of touch.

Château Pichon-Baron, Pauillac 94 (£675)
Much more concentrated in style, this is one the few 2007s that are worth cellaring for a decade or more. Tannic, yet richly layered, too.

Domaine de Chevalier, Péssac-Léognan 94 (£250, BBR)
If there’s one wine that bargain hunters should rush to buy in 2007, this is it. It’s sweet and savoury, with hints of fresh tobacco and plush, silky tannins.

Château Guiraud, Sauternes 94 (£300)
Like the 2009, this is a great sweet wine, with levels of acidity that are almost Chenin-like and mouth-coating flavours of honeycomb and vanilla.

Château Gazin, Pomerol 93 (£342)
Fleshy, texture and aromatic, this is the sort of Pomerol that claret lovers would find hard to resist: stylish, sweetly oaked and very drinkable.

Château La Lagune, Haut-Médoc 93 (£300)
Right up there with the bargains of the vintage, this is aromatic and forward, with subtle tannins, a core of sweet fruit and palate-cleansing acidity.

Château Nénin, Pomerol 93 (£240)
Fleshy and very Merlot-like, this combines hints of fig and fruitcake with a backbone of tannin and acidity. A 2007 that should age for another decade.

Château La Gaffelière, Saint Emilion 93 (£305, F+R)
Youthful and much deeper in colour than most 2007s, this is quite a structured wine with flashy oak and modern mulberry, cassis and plum fruit.

Château Duhart-Milon, Pauillac 93 (£900)
The Lafite connection has pushed the price up here, which is a shame because this is an elegant, perfumed Pauillac with a refreshing, finely balanced finish.

Château Haut-Bailly, Péssac-Léognan 92 (£420, Bib)
The fruit is medium weight and refreshing here, with plum and cassis, but it’s backed up by structured tannins. I’d leave this for another five years.

Château Haut-Brion, Péssac-Léognan 92 (£3200)
The most disappointing of the First Growths in 2007, this is leafy, smoky, but a little tart. The wine needs more flesh on its bones.

Château Clinet, Pomerol 92 (£360)
Deeply coloured and still young on the nose and palate, this is firm and well structured, with sweet oak and good underlying fruit. Just needs time.

Château Clerc-Milon, Pauillac 92 (£380)
The Merlot really sings here, giving the wine softness and approachability. Not a keeper, but poised and subtle with attractive sweet fruit and oak.

Château Cos d’Estournel, St Estèphe 92 (£720)
This is a decent Cos, but not a great one. The tannins are a little too prominent for the fruit weight, but the wine may come together with time.