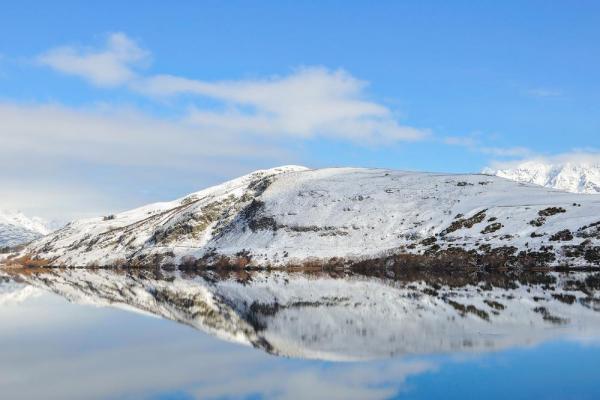 I was sitting at an old wooden bar at one of Wellington’s finest restaurants when I noticed the counter had been converted into a fish tank. Beneath my glass of Sauvignon Blanc a crayfish with claws the size of oven mitts shovelled pebbles from one spot to another. Once dislodged, the stones glided through the water before softly landing, like Armstrong’s first steps on the moon. Between sips of wine I watched the cray move rock after rock right under my elbows. It was too industrious to pity so I didn’t know what to feel. But I did look down and wonder: what on earth was it doing?

Ten days later, after wine tasting my way through Marlborough, North Canterbury and Central Otago, I was walking along a river 1,000 kilometres south in the Fiordland National Park. A place of enormousness and extremes. On the other side of the river that was shifting snowmelt with the noise and force of a jet plane, from a source so high I had to crane my neck to see, nine waterfalls tumbled through trees, bounced down crevasses and slapped into the river below. The energy was so contagious I half expected the rocks to shake, as if being tickled by Mother Nature. I picked up a rock and threw it across the river. Then another. And another. I thought back to the crayfish moving pebbles in the bar and wondered if there was something up there, looking down on me, wondering what on earth I was doing.

New Zealand does that to you. It shuffles your deck and makes you consider the order of things and who’s looking in on whom. It forces you to consider not only what on earth we’re doing but whether we’re supposed to be on earth at all. It does this with such speed and exhilaration, such energy and vitality with such lip-smacking and vibrant wines, that you almost don’t care what the answer is just so long as you’re part of the adventure.

For one, New Zealand’s landscape is stupendous. Utterly breathtaking. Nowhere more so than Central Otago, the region on the South Island most famous for Pinot Noir and an action sports industry built around ‘awesome’. Jagged mountains stab the skyline, aqua lakes shine like wet jewels, while ferocious rivers tear through gorges hundreds of feet deep. Among these natural fun parks, people jump, fly, raft, climb, glide, ski and hike.

“It has a presence that excites people,” said Alan Brady, a former journalist and founder of Gibbston Valley winery, who first visited in 1960. “The first time I drove in I had a spiritual experience. I loved it.” Brady was among the first band of winegrowers who started the modern industry. Among the experimental plantings in the 1980s, it was Pinot Noir that stuck its hand up and said, “I like it here”.

Central Otago is not just beautiful to look at, the sheer gumption of the landscape engages you in a way that’s both urgent and playful. It comes in close, grabs you by the shirt front and screams to know if you’re paying attention before playfully tussling your hair and saying, “Jokes!” Here, nature is not a bucolic, placid, bosom offering consolation and comfort, it’s a drill sergeant pushing you to your extremes.

Which might explain why the region’s pioneers planted grapes when experts advised against it. It’s winemaking on the edge. Central Otago is one of the hottest, driest and coldest regions in New Zealand; frost is possible year-round and at latitude 45 degrees, it’s on the edge of ripening possibility. Its geology is complex, too. Receding glaciers from successive ice ages ground rocks and left glacial outwash and a wide range of soil types, including fine sand, heavy silt loam and rocky schist. Several terrace levels of varying ages and every iteration of landscape — scarps, fans, chutes and valleys — make it a challenging place for a winegrower.

But Brady thinks the challenge is part of the attraction. “The region has attracted high-achievers from other places and careers.” This mix of adventurous people responding to a gobsmacking landscape has made it one of the most exhilarating Pinot Noir regions on earth.

Another way that New Zealand shakes you up is that it truncates the timeline of the earth. You almost feel you can touch the beginning with your finger. There were no humans in New Zealand before 1250. That’s less than 800 years ago. A bottle of Madeira. And if that doesn’t disrupt your chronology, try getting your head around the growth of the Marlborough wine region. A place where you can reach out and touch the beginning.

Notwithstanding an early block of Muscat in the 1800s, Marlborough’s first vines were planted in 1973 by Frank Yukich, founder and owner of Montana Wines (now Brancott Estate). Cloudy Bay made its first wine in 1985 under the founding winemaking and viticulture team of Kevin Judd and Ivan Sutherland, who now produce wines under their own labels Greywacke and Dog Point respectively.

Even the soils are young – some only 500 years old – and many vineyards were planted in virgin soils. (Whenever I hear that I am reminded of Alfred Wallace writing in The Malay Archipelago in 1869, “I was in a new world … few European feet had ever trodden the shores I gazed upon”.) Sutherland has been there from the beginning and is a champion of the landscape. He knows every hill and river braid in the region and shares the vintage records as though they were the births of his children: “There’s the coldest ’93, the wettest, ’95, the hottest, ’98, and the driest, 2001.”

The effect of New Zealand is so compelling that even Sauvignon Blanc reassessed its character when it got there. Marlborough’s unique growing conditions of high sunshine, warm summers, cool nights and low rainfall turned a variety that mostly behaved as a simple bistro wine in France into a vibrant, pungent, intense, tropical two-handed cheek slap. While more restrained and complex versions are now being made, Marlborough’s vivid dynamism changed what Sauvignon Blanc could be. As Sutherland reflects: “I can’t think of any other region in the world that’s done what Marlborough’s done in 40 years.”

But nothing makes you wonder about your place on earth quite like earthquake talk. New Zealand shatters your idea that the construction of earth is a done deal. Unlike other countries where you only get the keys when the place is finished, furnished and safety checked, you’re allowed to run riot in New Zealand before the concrete is even poured. It’s a hissing, shaking, steaming, exploding work in progress.

New Zealand has complex geology. It sits on the seam of two tectonic plates — the Australian and the Pacific plates, which slide under each other in different directions on different islands. The Southern Alps are rising about half an inch a year while the Marlborough Sounds are slowly being pushed under, all whilst you sip your way through sub-regional differences of Pinot Noir. A system of braided fault lines act as buffers and result in thousands of earthquakes each year. None has been more devastating than the Christchurch earthquake of 2011 that killed 185 people.

“Everything they say about your life flashing in front of your eyes is true,” says Angela Clifford, managing director of Tongue in Groove wines, who, instead of being at home in the Waipara Valley in North Canterbury, was in the Christchurch hospital with her three-year-old daughter, who was suffering from pneumonia, and her husband, viticulturist Nick Gill, when the disaster happened. After facing the earthquake inside the hospital – “a feeling of the earth falling away beneath you” – Angela ran outside to call on her other children and was knocked to the ground by an aftershock. “The hospital building leant over me to such an extent I thought it was all over. I couldn’t pull myself to my feet and in that moment, I resigned myself to the end.” The aftershock stopped, the building righted, but nothing was the same again.

“Everything you know to be true gets thrown in the air like a basket full of balls,” reflects Clifford. “But you get to choose which balls you pick up and put back in the basket. Carpe diem is the most useful term for it.” So, after working for other people for 20 years, Tongue in Groove was born.

Amid all this mind-bending ferocity are constant steals of beauty. One afternoon I was exploring Marlborough’s glacial southern valleys with viticulturist Nick Hunter. The area is quiet and pretty. The gentle folds of the hills provide relief. After a few minutes of admiring the scene, which included a visit from a wild peacock, Hunter broke the silence: “Have you ever noticed that Pinot Noir likes to grow in beautiful places?” Other moments of beauty are harder to make sense of. I later asked a winemaker whether they ever climb the Wither Hills. “Yes, especially on summer nights. When Australia has bushfires, we get the most beautiful sunsets.”

This is how New Zealand shuffles your deck: to appreciate New Zealand wine, you have to accept beauty and violence as equal players in the one short narrative. You have to accept the world is a series of random smashes and opportunities. New valley floors, new vineyards, new ways to see your life. But you can’t have that valley floor without the previous glacier, you don’t get a terrace without an uplift and you may not see your life anew without a random shock. And this process has been happening with the full force of the universe for billions of years. It is the universe and our dance with it. And in New Zealand, you can feel it happening right under your feet. It’s a sort of rumble. An energy. And it makes you want to hurry, rush, move.