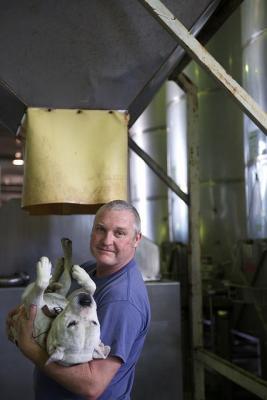 ‘Stop comparing yourself to others’ is advice we are given early on in life and, depending how well we heed it, quite often later in life. It’s reasonable counsel, particularly for those nonsensical situations that pepper our lives. When a friend is gifted a pony for their 10th birthday and you get an illustrated copy of Black Beauty, for example, even though you both ride horses and as far as you can tell, are in the same general sphere of goodness, popularity, hair length and spelling competence – there are few explanations that help make sense of it. It’s best, we are advised, to avoid comparing the two things. And yet… as if!

At a recent tasting of the first decade of Oakridge 864 Chardonnay, a wine that many cite as a turning point in the recent evolution of Australian Chardonnay, winemaker Dave Bicknell expands on this last comparison. “Sure, like most of us, I had been blown away by the odd wine every now and again, but I never viewed Burgundy as a realistic benchmark. Different hemisphere, light, water, soil — everything. Looking at Burgundy would be living in the shadow of awe rather than the sunlight of creativity.”

Another argument is that we are comparing ‘oranges with apples’. We know that wines from different regions taste different, so what point are we trying to make? Many of the world’s most revered wines reflect an inimitable sense of place. Dave says, “It’s important for us to develop Australian-flavoured wine, no matter how much we might like the old guard benchmarks. They are a useful line of sight from time to time, but the last thing we need is to be seen to be aping the monkey.”

A further objection is that it’s not a fair match, particularly when we are comparing the same variety from regions with significantly different winemaking experience. You can’t possibly compare wines from a region built on thousands of years of winemaking history to one with just thirty years of experience, for example. Three decades is barely enough time for a vine to hit its straps, let alone for an enabling wine culture or appellation system to evolve around it.

And yet, although I agree that these warnings are worthy of consideration, I’m not sure we should dismiss the exercise of comparison all together. In fact, I don’t even think we could.

In my limited understanding of how the universe works, I thought that comparisons – high level conversations of ideas, quality, innovations – are how civilizations have evolved since time immemorial. One idea – or wine – responds to another and eventually creates a 6,000-year wine narrative. Modern wine wouldn’t be as good as it is if we hadn’t shared, borrowed and improved on ideas from history.

This wasn’t only my romantic notion of the world. New World equivalents are formally tasted alongside their Old World counterparts. People discussed Burgundy at the Oakridge tasting. Dave had to be influenced by comparisons to Burgundy. How could he not be?

I pondered it for a day, and drank a bottle of 864 Chardonnay for inspiration before emailing Dave some more questions. He was out in the vineyards when I called him the next day. Between contemplative pauses in our conversation, I could hear magpies warbling in the background.

“I never considered Burgundy as a marker. The trigger to make 864 was that I was convinced we had the potential to make Chardonnay at the highest level and I thought we might have some of the vineyard resources to give it a go.”

But how can you not be responding to the influence of the great wines? “You do look at the great wines and acknowledge them unconsciously. I guess they are always sitting there somewhere in the periphery.”

I wondered aloud how such greatness could only be peripheral and not more of an influence based simply on the timeline of wine’s evolution. I mean, aren’t we all expressing versions of the culture that came before us? And isn’t that OK? I will never write like the great essayists but the canon exists and it makes no sense not to read it. Ignoring greatness is no more sensible than deciding never to have a friend, just in case one of them gets gifted a pony.

Dave might have let out a sigh before he spoke; I couldn’t quite hear over the squawk of a magpie. “Maybe you’re right. But making wine in the new world is a bit like being the only woman working in a company full of men. You are always told that what you are doing is just a version of someone else’s work. You have to work twice as hard. The minute you do something great in Australia, people say you’re just imitating the Old World. People always accuse you of making a copy of something else.”

Which is precisely what I was doing right then. I was guilty. These were great wines. Great Australian wines. The best that Australian Chardonnay has been since Busby delivered his collection almost 200 years ago. These wines reflected the character of their various single vineyards. They rolled out a harmonious weave of wine and winemaker. They were all that was good and beautiful about Chardonnay – complex, elegant, detailed, racy and graceful. Dave was making exquisite Chardonnay from various sub-regions in the Yarra Valley, in Victoria, Australia … and all I could ask was where the influence of Burgundy was.

“We will never be the first to have made the greatest Chardonnay so we will always be in a shadow. We don’t compete with Burgundy. We compete against new world Chardonnay.”

And there it was: the great lesson about comparisons. Sometimes, no matter how clever or good we are, for no other reason than where we are plucked and placed onto the narrative of history – in this case, two thousand years after Burgundy – not everyone gets the pony. ‘Stop comparing yourself to others’ might be the soundest advice ever. Sometimes it just doesn’t make sense.