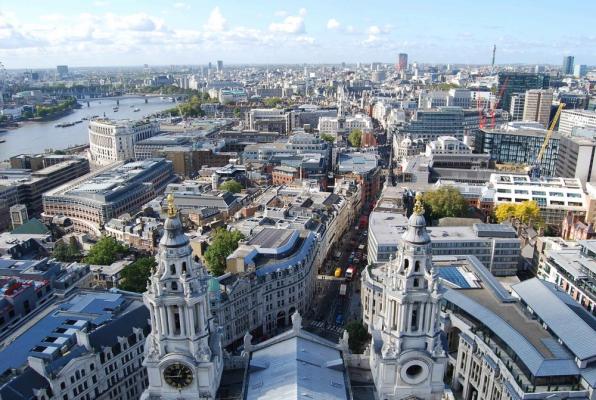 In her 1930 essay Street Haunting, A London Adventure, Virginia Woolf used her search for a lead pencil as an excuse to indulge in “the greatest pleasure of town life in winter — rambling the streets of London”. Woolf’s walks were a chance to escape her immediate circumstances by searching out new experiences. So too I had come to London – with its breadth of tastings, bustling wine trade and proximity to Europe – to enjoy, among other things, a sensory adventure in wine. My hope was to make my world bigger by tasting more of it.

My London wine adventure started one bright but bracing Friday in February on stately St James’s Street, when I stepped into the underground cellars of Berry Brothers & Rudd. In a 19th century cellar where Louis Napoleon allegedly held meetings while in exile from France, our party enjoyed a selection of treasures that spanned a 2006 Pol Roger Brut Reserve to a 1970 Warre Port. The 2012 Heymann-Löwenstein Uhlen Roth Lay was evocative, floral and complex, and the 2001 Domaine Louis Rémy Latricières-Chambertin offered brooding red fruits and savoury undertones. The 2011 Ridge Vineyards Estate Merlot, from California’s legendary Paul Draper in the Santa Cruz mountains, shone for its energy and vivacity. It was ethereal and rustic all at once and I was delighted it met with the legend. Below the shops selling hunting gear, yachts and gold bullion, doors to the world of wine were opened.

With a head full of chatter about new wines and old stories, I set off up St James’s Street to become part of Woolf’s “vast republican army of anonymous trampers”. It was late afternoon and the light was low. An icy wind slapped my cheeks and pierced my ribs as it leaked through the seams of my coat.

A week later, I left my corner of Central London and travelled along Woolf’s “shores of Oxford Street” and her “deserted streets of Mayfair” to the Lea & Sandeman spring tasting where more than a dozen countries were poured. The racy 2015 Chavignol Domaine Vincent Delaporte offered wafts of fresh cut grass and white florals so pristine I could almost hear insects buzzing around spring blooms. The textural and wildly attractive 2014 Maquina and Tabla Verdejo recalibrated my ideas of Spanish white wine. A charming pair of Stapleton and Springer Czech Pinot Noirs made me think, for the very first time, about Czech Pinot Noirs. The adventure continued, tracing the landscapes of South Africa, Argentina and Portugal. Each wine transported me to a new region, idea or taste far from the streets of London.

The tasting of Armit Wines’ Italian collection transformed a cold and cloudless day by offering a sensorial wander across the coasts, mountains and islands of Italy. The 2014 Castello di Buttrio Mon Blanc displayed the energising acidity and aromatic complexity of the hills of Fruili. The 2012 Querciabella Chianto Classico was a beautiful, bright and harmonious wine from Tuscany. The graceful 2010 Gaja Conteisa spilled with seductive aromas of bright red fruits and delicate florals that settled with the power, finesse and harmony that nebbiolo from Piedmont can. I left the tasting buoyed by the sensory adventure and longing to taste more.

Woolf wrote in her essay, “It is always an adventure to enter a new room for the lives and characters of its owners have distilled their atmosphere into it, and directly we enter it we breast some new wave of emotion.” As I stepped off the wintry streets into tastings around London, I realised that a room full of wine has the same capacity to transform.

Perhaps the most enlightening tasting was in the Royal Aeronautical Society building on the edge of Hyde Park, where a selection of wines from Justerini & Brooks’ Bordeaux portfolio was poured. It was an exquisite tasting. Every wine stood tall and attentive, like a battalion of alert and polished generals. Lafleur. Château Mouton Rothschild. Château Pontet-Canet. Calon Ségur. What a treat to see the lifted, lighter, brighter wines of the Right Bank with their wafty berry top notes and underlying train tracks of steely acidity. And the darker, broodier, cigar-box wines of the Left, that required one to lean in close to hear what they have to say.

Rooms full of Bordeaux have not been a common occurrence in my tasting life so far. Such wines are hard to access. It’s perhaps not unrelated that my enthusiasm for drinking Bordeaux has been usurped by more approachable wines. But, as I wrote in my notes that day, I was pleasantly surprised by the brightness, charm, generosity and lightness of foot they displayed. They were much more approachable than I had imagined them to be. As I passed Hyde Park on my way home, a squadron of the Queen’s Life Guard trotted by on perfectly groomed mounts, their breastplates shining and the white plumes on their helmets bouncing behind them like pigtails.

Between official tastings were personal explorations with various others. When a friend visited from New Zealand, we devoured wine lists in Marylebone like children in a lolly shop. “I’ll order the Anjou, you get the Petite Arvine.” And with another I ordered Grand Cru glasses by the special pour and not-so-special price. “You only live once!” we toasted before hovering our noses over the bowl-sized glasses. Even mediocre wines drunk late at night when I was led to windowless rooms in Soho seemed fitting as stories from its seedy history swirled through the air.

One month on, the sun is paying more attention to London. The days are brighter and longer, the air is looser, the gardens are rumbling to life and, as Iris Murdoch wrote in January 1943, “St James’s Park is thinking about spring already”.

I returned to St James’s Street to taste the wines of the legendary Spanish producers Alvaro and Ricardo Palacios, the winemaking family lauded for reviving traditional Spanish viticulture. I had previously visited Ricardo in the hills of Bierzo and tasted his range of Mencias, but this time it was Alvaro’s Garnacha from Priorat that stole my heart. Not only did the wines recalibrate what I knew of Garnacha, but the ethereal quality of the wines – the 2015 L’Ermita was fine, expansive, detailed and beautiful – reminded me that the boundaries of wine’s beauty are infinite and ultimately unknowable. And each time the boundary is redrawn in wine, so it is in us.

Woolf finishes her essay by reflecting on her seemingly small achievement at the end of her ramble: “The only spoil we have retrieved from all the treasures of the city, a lead pencil.” After a month tasting wines in London, one could argue I have little to show except my notes. But of course I have tasted treasures, imagined places, felt seasons, walked landscapes, redrawn maps and experienced the sensory adventure of it all.

“That is true: to escape is the greatest of pleasures”, wrote Woolf “street haunting in winter the greatest of adventures.” After my first month in London, I feel the same can be said of wine tasting.