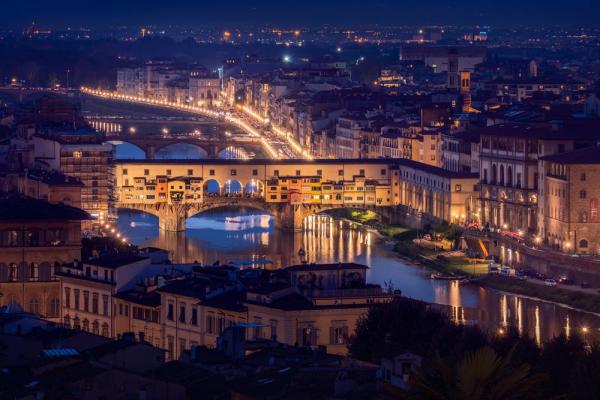 Even the most adventurous wine travellers have a breaking point. I was standing on the kerb in a narrow street in Florence studying the façade of a restaurant that showed nothing if not promise. Empty wine bottles lined the window, a statue of Bacchus squatted in the corner and gold font unfurled the name on the glass. It was the third place we had tried on our first night in the city; the first wasn’t special enough, the second too modern. But while all the signs were promising, I had no idea if they were real or not.

I had arrived a few hours earlier with a colleague after spending the week wine-tasting in the bucolic hills of Piedmont. Our senses were finely tuned and, thanks to the pleasures of Barolo, our benchmarks for beauty elevated. Our gastronomic lodestar for dinner was something authentic that had a great wine list. But as strangers to the city, and with nothing but a Merchant Ivory montage as our guide, it was hard to know what authentic was.

It should come as no surprise that finding a non-touristy experience close to the Ponte Vecchio was like asking for an unsponsored product at Disneyland. Italy receives almost 50 million tourists a year and Florence 15 million of them — we were ground zero for the icon-turned-into-a-gift. We bumped around the streets from one restaurant to another until we landed at the ode to Bacchus.

We were still staring at the menu in the window when the doors burst open and a group of five diners surged forth like children exiting school for the day. They looked happy enough, I thought. Perhaps recognising our quandary, one of them smiled, looked back at the entrance of the restaurant and then sort of shrug-nodded in a gesture of semi-approval, as if to say: “Sure, it’s not dinner with the Medicis, but it’s not salmonella either.”

We stepped into the restaurant, which was bustling with a dinner rush, and a chorus of waiters greeted us with a reprise of Buona Sera. Not just one, but the whole staff. It was sung with so much gusto I thought they had mistaken us for someone else. Displays of cheese, salami and flowers arrangements were ornate and bountiful, as if Caravaggio himself had merchandised them.

“Buona sera,” belted out a young and chubby man who was shiny with hard work and clearly our lead for the night. He spread and swept his arms in front of him and sang. “Anywhere you like signora and signor!” “Here?” I asked, gesturing to a table. “For you, annn-y-where you like!”

The performance was infectious and within seconds we joined our waiter in his repartee and played our bit parts. We laughed at anything before it was said, threw theatrical head tosses to show we were gripped, and dismissed overt flattery with the flick of a hand. “You are a magnificent couple,” he bellowed his flattery to nearby diners. We were in fact neither but, desperate for some great wine, we wanted this relationship to work as much as anyone and were not ashamed to sing for our supper. As he walked away, perhaps sensing my thoughts, he turned back and said: “And I mean that.”

As I contemplated aloud why he would say that, my companion, himself a restaurateur, was frowning as he scoured the wine list. This was a bad sign. A bad wine list to the wine enthusiast falls into the same genre of disappointment as visiting a lover’s house for the first time and seeing annotated copies of The Fifty Shades series. A wine list, like a library, is a declaration of one’s taste, and taste is so intrinsic to whom a person is that to hope their taste changes is to hope they change. In that instant, you realise that despite every tender moment shared thus far, you are fundamentally different people.

Same with a wine list. What a restaurant does here says a lot about what they value when no one is watching. A wine list can be bad for several reasons: it can lack variety, be poorly matched to the food, it might be too generic, too experimental or just self-indulgent.

This list’s flaws were that it was light on options and heavy on euros. We could order a carafe of red or white jug wine for about six euros or jump — bound across light years — to bottles of red wine beginning at 180 euros.

“If you want a recommendation, this wine here is in-crrredible!” said our waiter, pointing to a bottle that was 280 euros while looking over our heads at other guests. We said nothing. He continued his pitch still scanning the room. “You cannot say this wine is just good. You cannot say it is just nice,” he said, building to an operatic crescendo. “You can only say this wine is in-crrredible!”

We stared at the list but, like the city outside, had nowhere to go within it. There was no compromise. There was no place to meet you halfway with, say, a bottle of Rosso di Toscana sangiovese or a dolcetto d’Alba. He looked over us and around the room as we eyeballed each other. Still at a loss, we said nothing. “Maybe you like this one here,” he said pointing to a 400 euro bottle of a famous ‘Super Tuscan’ wine. “Never has anyone complained – never! – about this wine. It’s not just good, it’s incrrredible.”

Like all good manipulations, I felt the twist before I could tell why. We were being forced to choose between evils — nameless, generic, commercial jug wine and wildly expensive icon wines. While both have a role in the world of wine — and we had paid generously for greats in the north — that they were our only choices felt like a bind and a compromise.

He hovered. I felt agitated. “We arrived tonight from Piedmont where we have been tasting Barolos,” I said, hoping that if he knew we were into wine he might tone down the performance. “Ah yes,” said our friend. “But this wine here, it is just like Barolo.”

Incredible indeed. These wines were not alike. The Sangiovese of the Super Tuscans and Barolo’s Nebbiolo are from two different empires. Sangiovese’s cheery red fruits and herbal savouriness, to speak nothing of the dashes of other varieties, are galaxies away from Nebbiolo’s mesmerising, complex, haunting perfume. The varieties are built by two different architects, too: for sangiovese’s refreshing acidity, fleshier mouthfeel and dusty tannins, Nebbiolo offers a highly structured wine with levels of acid and tannin so intense they can reset the shape of your mouth. To say Nebbiolo and Sangiovese are the same is to say Caravaggio and Turner are the same because they both paint. He was growing bored with us. I thanked him and asked him for more time.

What was going on here? I wanted to blame our waiter but I couldn’t help but wonder if this was not our waiter’s fault but ours: all the 15 million tourists who come to Florence each year not just looking for a romantic experience but in some way demanding to hear them. “How do you say ‘Good evening’ in Italian again?” “What is the most authentic Italian dish you have?” “What is the most unbelievable wine you have?”

Travel relies on an element of self-delusion to fulfil the fantasy we have of a place, nowhere more so than Italy. We had to ignore an entire circus out there to get to our Henry James montage of Florence. Among the illuminated Renaissance beauty, which was, to be clear, utterly breathtaking, brightly lit shops were filled with toddler-sized tubs of iridescent gelato, Limoncello bottles in the shape of the ‘boot’ of Italy and Michelangelo’s David posing on magnets, postcards and calendars. Preposterous buzzing toys were shot into the sky by touts selling fake designer bags, not far from where the real boutiques were closed for the night. Should we all just play along? I wondered how many times travellers had taken our waiter’s recommendations and been happier for being told they were drinking one of the most incredible wines in Tuscany? It, too, had a role to play in this performance — it was the elixir to their perfect Italian moment.

We scanned the wine list with a new lens of empathy. In addition to the 16 million tourists every year, Florence takes in more than 10,000 international students. Maybe a wine list made up of tourists wanting ‘the very best’ and students wanting some alcohol to match their budgets looked exactly like this. For all I knew our waiter had tried desperately to fill the list with interesting and mid-priced wines from smaller local producers but all anyone ever asked for was the very best or the cheapest.

And what about the not-insignificant transformation that Italian wine has undergone in recent years. From cheaper high-cropped wines made to be drunk from fiascos at picnics to lauded wines of place and profundity. Why fill a wine list with the middle when you can show these future champions of Italian gastronomy the very best wines to talk about when they return home? This is how reputations are built.

And if I am going to stretch this moment of travel equanimity even further, Nebbiolo and Sangiovese are kind of alike in the big scheme of things. They are Italy’s two noble red varieties and the single two wines that have gained international recognition and helped change the perception of Italian wine.

Maybe the problem was us? Maybe all that wine tasting had distanced us from reality, as they warn wine tasting does to normal humans. Perhaps we had become that traveller — the bumptious type who, despite coming to one of the most visited cities in the world, speaking none of the language and staying in a hotel with designer bathroom products and complimentary fixies, is still convinced they deserve the version of the city reserved for the gastronomic elite, not tourists who want to stand in front of the monuments and sexy-pose with a selfie stick. Maybe we had become that traveller?

Maybe. But as willing as we were to seek the wine travel fantasy and play our role in this performance, we decided that there was a fine line between imagination and delusion that we were not willing to cross, even those of us who had just travelled halfway round the world to find beauty in a glass of wine. As we left the menus on our table and walked through the cavernous restaurant back towards the door, the chirrups of “buona sera” were weak, confused and only half-sung, as if someone had strayed from the songbook and interrupted the performance.